Battleborn Beta Launches In Early April With Two Missions And Two Multiplayer Modes
by Mike Futter on Mar 23, 2016 at 02:00 AM 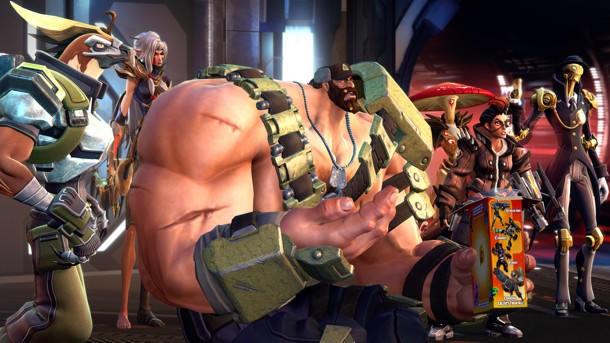 You’ve heard us talk about Battleborn’s not-a-MOBA (but kind of a MOBA) multiplayer gameplay. You’ve seen us preview the cooperative story mode. Soon, you’ll get your chance to try for yourself.

Gearbox has announced that the open beta begins on PlayStation 4 on April 8. On April 13, Xbox One and PC players get in the door. The beta wraps up for everyone on April 18.

The beta consists of two story missions, two multiplayer modes (Incursion and Meltdown), every hero, and the loot system. The story mode is presented as a television show spanning eight episodes (missions), each of which has a prologue. Gearbox says each of these will take an hour on average, which leads us to eight hours of cooperative content upon first play.

However, Battleborn is positioned as having solid replay value. You can take on the missions with any assortment of heroes, and you'll unlock more to fill out the 25-character roster as you complete missions.

You can read more about Battleborn in our most recent preview. You can also catch up with our August 2014 issue.

Battleborn will be out on May 3 for PlayStation 4, Xbox One, and PC.