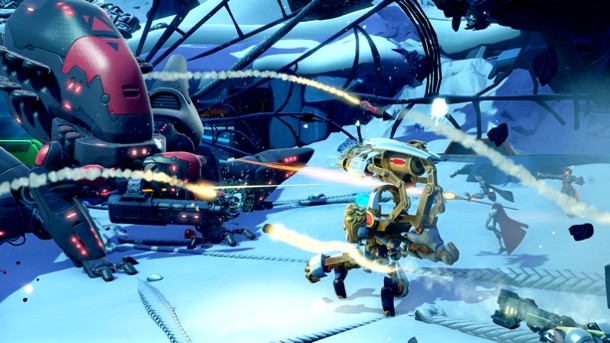 A few weeks ago, I had the chance to go hands on with Battleborn again. The preview consisted of a new co-op story mission, our first opportunity to see how missions play out in single-player, and two multiplayer modes.

In many ways, playing Battleborn is like walking into a house that’s a fixer-upper. I can see the potential. The game has good “bones.” It just needs some love.

Gearbox has time to improve upon the things that work and fix the elements that aren't coming together yet. Here are five of the strong points and another five elements that need some attention before the game's February 9, 2016 launch.

The same studio that brought you Scooter and Handsome Jack is weaving its magic with Battleborn. The writing in the two missions we've played so far is lighthearted and just ribald enough to bear a shade of blue.

The voiceover work from characters speaking to players during missions is executed well, and just like the Borderlands characters you barely see, they steal the show.

The characters are diverse, with interesting skills

Fitting different playstyles into a first-person shooter isn't uncommon. Just look at any class-based offering. Battleborn goes beyond that though, as Gearbox attempts to strike a balance between ranged characters and melee fighters.

With 25 characters, each with their own meta-level you progress by playing, there's a reason to spend the time going back through the story missions alone or with friends. You won't start with the entire cast unlocked either. You'll need to work at opening up some of the heroes (and villains).

Along the way, you'll unlock mutations that give you a third skill option at five points along your in-match leveling progression. Gearbox says these aren't meant as more powerful abilities, but will give players new ways to build out their characters and offer different types of complementary choices.

Loot allows you to tweak your play style

In addition to in-match decisions that change how you'll build out your character, a loot system allows you to tweak things to better fit with your playstyle. For instance, you can choose items that increase your shield strength but make you wait longer for the recharge process to begin. You can decrease your cooldowns at the cost of weakening your basic melee attack (or vice versa). Or, you can spend one of your three slots on a "parting gift" item that drops a grenade where you die (and hopefully takes out an enemy).

As you become familiar with the characters and how you like to level them, you'll be able to pick loadouts that take advantage of specific skills and helix choices. Just don't get bogged down while your friends are waiting to play.

Pickups give Battleborn more of an arcade feel

While playing missions (not multiplayer matches), you'll come across orbs in caches or left behind when enemies die. These have a variety of temporary effects, like boosting your speed and increasing your defense. Suddenly moving faster felt great, and while under the effect of one of these pickups, I felt more in control and, oddly, more powerful when I was moving faster.

This minor arcade element had a profound impact on my enjoyment. I'm not even sure why, but those pickups served as better cues as to when to push the fight on the AI better than anything else.

I’ve now played Battleborn on three occasions as five different characters. Three of those were ranged fighters. Two were melee.

Hands down, the ranged characters are more fun and simply “feel” better. The melee fighters have potential but there are some glaring issues.

As a ranged character, you can survey more of the battlefield. Melee fighters have to get very close, and sometimes their fields of view become engulfed with terrain if an enemy dodges out of the way.

Right now, it’s extremely difficult to tell if you’re making contact with a sword or axe swing. Gearbox can improve the feedback on this with more pronounced visual and audio cues that differentiate a hit from a whiff.

The loot system is clunky and, so far, unsatisfying

Gearbox built the Borderlands name on dropping tons of loot for players. Battleborn uses the same color-coding system, but instead of dropping loot in the middle of matches, you open packs after each round.

This is slow, tedious process right now. You can’t compare a new item against others identical but for potency differences. It’s a slog to figure out if you want to keep everything, but they are choices you can’t defer. Your loot inventory is extremely limited, so you’ll need to keep only your best gear.

Loot is supposed to be fun. Playing around with it during the preview was anything but. Think Mass Effect 1, and you'll start to get the idea.

Repetition means the game could get Battleboring fast

If you like Borderlands’ humor, you’ll be right at home in Battleborn. The problem is that the story missions are meant to be replayed with different characters, over and over.

It doesn’t seem like the dialog changes are in any way based on who you are using, or even if you are playing alone or with friends. We talk about how Destiny’s year one was plagued by repetition of a handful of story missions.

Battleborn looks poised to repeat that. The difference is that Destiny’s thin story during its debut was a blessing. The dearth of dialog was also a blessing. The opposite could very well be true in Battleborn.

Command is an uninspired multiplayer mode

Objective point multiplayer modes are a dime a dozen. Battleborn’s is called “Command,” and so far it does nothing to innovate.

There are three points. Controlling them adds to your score. You want to reach 1,000 points before the opposing team.

The only way this varies from every other game that offers a similar mode is that there are pads to spend shards (earned in-match) on turrets and boosters. However, it’s not enough of a difference to make the mode stand out from the pack. It needs something to differentiate it.

Battleborn’s second multiplayer mode, Meltdown, blends the marching minions of tower defense games with the adversarial play and symmetrical maps of MOBAs. The concept is similar to Smite’s Arena mode on a larger map or Orcs Must Die Unchained’s gameplay without traps.

Matches are played to 600 points, with waves of small minions led across the field by a larger leader drone. Your scoring zone and the opponents’ are in the same vicinity, so you’re going to end up in conflict as you try to destroy their robots and protect your own.

Once your score is halfway to victory, your goal is relocated deeper in enemy territory. This causes drone paths to fully overlap and brings both sides into conflict more frequently.

I noticed that there is no incentive for players to escort their drones. Players can entirely abandon their minions and hunt down foes, which has the potential to turn the mode into deathmatch if players don’t PTFO.

There’s also no way to temporarily or permanently improve your minions to make a push toward your goal. You collect shards in the match, but again, these are used for turrets and boosters.

It’s rare that I’d suggest a developer blatantly rip off another, but Robot Entertainment has done a great job of solving two problems. Orcs Must Die Unchained rewards players with currency for staying with their minions. It also allows players to customize and upgrade their troops.

Alternatively, some kind of jungle that allows players to earn major buffs in the middle of a match would layer in more strategy. Meltdown doesn’t need to be a carbon copy of MOBA play, but it does need more oomph.