Comparison Video Shows How Batman: Return To Arkham Stacks Up To Originals
by Jeff Cork on Sep 06, 2016 at 04:45 AM One of the big questions that naturally arises when a company remasters an older game is how it compares to the original. Fortunately for us, Warner anticipated that reaction and has released a side-by-side comparison trailer for its upcoming Batman: Return to Arkham collection. Take a look at this lengthy video to see footage from the original versions of Batman: Arkham Asylum and Arkham City running next to their PlayStation 4 and Xbox One counterparts.

The games have been rebuilt using Unreal Engine 4 by Virtuos, and as you can see from the video below, the lighting has improved dramatically. Other elements have been tweaked, too, such as the level of texture detail and clutter and effects evident in the environments. It looks like Commissioner Gordon got some serious bed head, too.

You'll be able to experience the changes for yourself when the game comes out October 18, which is a few months later than its original date. Batman: Return to Arkham includes the first two Rocksteady games and all of their available DLC. 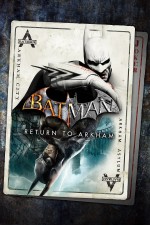