Rocksteady Games debuted Catwoman right around E3 a few months back, and we had a chance to try her out in a story mission. It gave us a decent sense of some of the differences between Selina Kyle and Batman, with her acrobatics skill and speed being on the forefront. I had a chance to play as the character in two of the game’s challenge rooms, which gave me a much more relaxed and freeform environment to see her in action. Also, I got a chance to see the game in 3D for the first time.

Rocksteady says that Catwoman is about twice as fast as Batman but approximately half as strong. I’ll save you the math, and just say that she plays very differently from Batman. In the combat challenge, I faced waves of the Joker’s goons on a rooftop. It took a little bit to get back into the groove – I hadn’t played Arkham Asylum in a while – but it all came back to me quickly. Maybe I got better through some kind of cosmic intervention, or perhaps Rocksteady did a great job of retooling the way that combat flows. Whatever the reason, I was able to dart between clown-masked goons with ease, picking them off one by one.

Because Catwoman is so nimble, her takedowns are a bit more spectacular to watch than Batman’s. While he’s happy to knock a few skulls together and call it good, Catwoman’s equivalent attacks incorporate handsprings and stiletto-heeled kicks. One of my favorite maneuvers was to counter an opponent’s attack, hop onto his shoulder, and then stun him while using him as a springboard to the next foe. Batman is definitely competent in battle, but I have to say I had a lot more fun with Catwoman.

In a predator mission called Meltdown Mayhem, I had to take out a series of thugs on patrol in an industrial area. It was a nice counterpoint to the fast-paced combat challenge. This mission was about being methodical and taking my time. Catwoman’s weakness is clear when she faces armed opponents; a few shots will reduce her health to one quarter of its maximum. I found that I didn’t rely on detective vision here as much as I did in Arkham Asylum. When I did activate it, it was just for a second or to so I’d know where the enemies were.

Catwoman can use gargoyles as perches, much like Batman can. The difference is that some of them require her to cling onto the wall below the statue and then make a couple of quick leaps to get into position. During that time, you’re exposed. I got into position up high and waited until a bad guy split apart from the group and walked below me. I then sprung into action, falling upon him and then silently putting him out of commission before he recovered. His friends were alerted and moved to the position, but by the time they arrived to investigate, I’d moved on.

I used the environments to my advantage as I picked off the remainder of the group over the next five or so minutes. One of the guys met his end by standing too close to the edge of a catwalk. Little did he know, Catwoman was clinging below, waiting to flip up and over, throw him to the ground below, and then disappear. Another clown was surprised by a bolo, and I moved in close and finished him while he was knocked down.

The mode was a lot of fun, and I felt appropriately sneaky. As I worked my way through the Joker’s minions, I earned Riddler medals for meeting certain criteria. For instance, one of the assignments was to take out an enemy silently from above. No problem. The medals can be cashed in to buy special combat modifiers (regenerating health, aggressive enemies, disabled gadgets), which can be used to spice up the combat challenges further.

As for the 3D effects, well, it was 3D. I have to say, the effect was subtle and didn’t seem exceptionally gimmicky. The tracking shot of the bolo in flight was especially cool. You might not want to purchase a new display specifically for Arkham City’s 3D support, but it’s certainly worth activating if you already have a setup that supports it.

After spending some quality time with Catwoman, I’m definitely a fan. Her fast-paced style and acrobatic maneuvering seemed to line up with the way I like to play action games. I’m looking forward to seeing her in action more as Batman works his way through the streets of Arkham City. 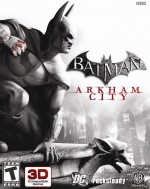