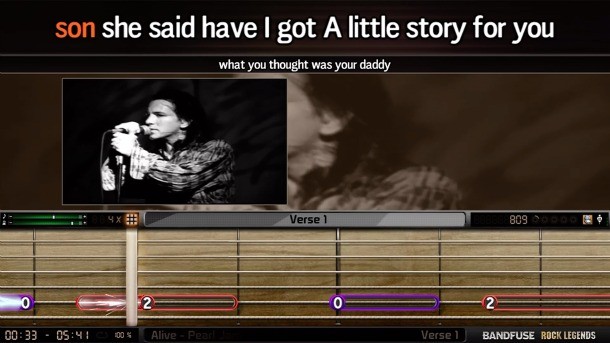 I'm not a musician. I became competent with plastic instruments over many years of Rock Band and Guitar Hero gatherings, but cannot play any real instruments.

I had never held a guitar in my hands before I sat down with BandFuse: Rock Legends – something very apparent when I found myself bumbling around, creating twanging noises barely akin to music.

Though I struggled to hold the correct frets and strum the guitar properly to try and mimic the music my favorite bands make, I was truly learning the basics as opposed to hitting color-coded buttons as they popped up on screen. Realta Entertainment's new music game for the Xbox 360 and PlayStation 3 just might turn me into a rock legend – or at least a capable guitarist.

Realta's game is built around one main premise: playing a real guitar. Described by the developer as something for people to use when learning how to play, or to inspire them to dust off their old Fender, one big way BandFuse strives to do that is Shred U.

Shred U, or Shred University, is an extensive instructional area. Within it is the Skills Lab, a mode that provides fundamentals on how to play via videos with former Guns N’ Roses guitarist Slash. Video segments featuring different famous guitarists talking about their craft and life as a musician round out the mode. The video library is something the developer wants to expand with downloadable, magazine-esque content.

The Lick Lab is another learning tool. It contains over 2,000 licks, all playable for practicing songs. This means players can choose a specific solo to play, or any section of a song they want, to continually play at different difficulties or speeds. Start at 40 percent speed until you ace it, and then ramp up the speed until you feel confident moving on to a new part of the song, and new difficulty with more notes. It’s up to you how you use it, and it jives with the game’s play-how-you-want feel that Realta is going for.

This ability to tailor what you play gives BandFuse a level of customization that sets it apart from many other music games. 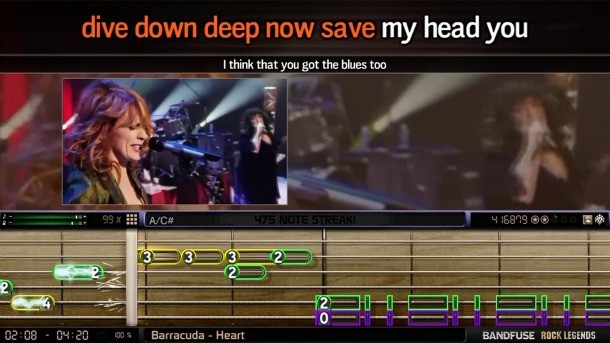 All of this customization would be for naught if the game didn’t play well, but it does. BandFuse’s user interface presents a clean “fret highway” with a couple of distinctions: numbers on the colored notes, and music videos or live performances playing in the background. Those numbers are important as they denote which fret to hold down when strumming. While it’s not a notation system I’m familiar with as a beginner, this TAB layout is the same system used by guitarists around the world, so it’s easy to imagine my skills transferring out of the game.

Game sessions are scored via pitch and timing, with a multiplier that has no limit. Players know if they hit a note correctly when an electricity effect engulfs it. Input lag isn’t noticeable – something that held back previous music games.

Featuring four-player capabilities with guitar, guitar, bass, and vocals, developers hope to provide a multiplayer experience that is as competitive, or lackadaisical, as players want.

Those who want to keep their performances can do so, as the game records what you play in its entirety. Eventually, Realta hopes to provide a way for players to share those recordings online via social media.

The UI is clean, and the scoring simple, but I find myself at times missing the crazy, cartoonish avatars of Guitar Hero and Rock Band. What’s presented is the fret highway on the bottom of the screen, with the color-coded notes flying by horizontally, and a music video or live performance video playing on the top half. 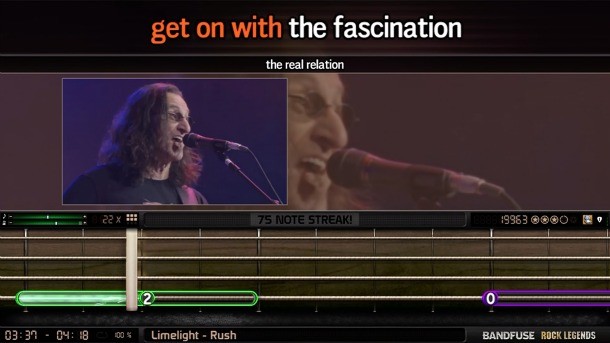 Some other things also remain to be seen: how in-depth will training videos be? Will the game's more realistic approach become tedious over time, or stand up to long play sessions? And will the final catalog of songs be music I want to play?

During my time with the game I saw Pearl Jam, Blink 182, Slash, and Coldplay – only a handful of what is part of a 55-song lineup available as soon as you pop the disc in. Realta promised 100 additional songs as day-one DLC, so there should be something for everybody.

The guitar bundle is not yet priced, but for $69.99 buyers get the game, audio breakout, and guitar cable. Bumping up to the $79.99 band edition nets you two guitar cables, a USB hub, and a microphone. Realta also allows any six-string electric guitar to work with the game.

Only time will tell, but it looks like BandFuse may pave the way for more realistic music video game experiences in the future. What's important is that it walks the line of appealing to both gamer and musician. So far it seems like an intuitive way to finally pick up a guitar – even if it just means casually strumming to my favorite Linkin Park song.