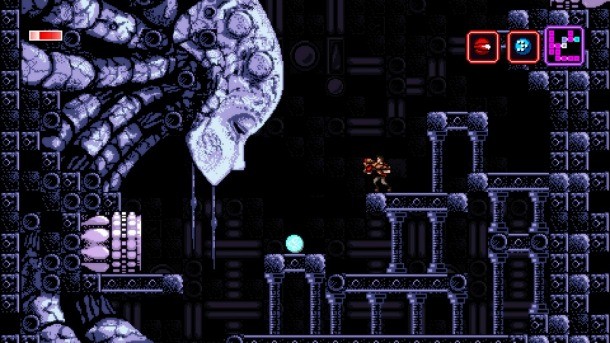 Many artists find comfort in collaboration. Where one de sign er is weak, another is strong. Even the leanest indie studios often seek help, having a friend assist with programming, outsourcing the art to a third party, or hiring a professional musician for the soundtrack. Few designers are talented enough – or crazy enough – to attempt to create a full game from scratch entirely on their own.

Tom Happ is that kind of crazy. Inspired by some of the best 8- and 16-bit games from his childhood, this designer has toiled tirelessly for nearly half a decade, creating the code, the sound, the art, and the story for Axiom Verge. Sacrificing sleep, personal relationships, and career security, Happ has laid it all on the line to prove that he has what it takes to make a complete game.

The Accidental Designer
Happ originally tried to major in physics, but realized he wanted to make games after he was inadvertently enrolled in a computer science course in college. The budding designer switched his major to computer programming, but after graduation Happ had little luck finding a game programming position, so he joined a graduate program for computer animation. Ironically, after spending all this time learning to animate, Happ’s first industry job came as a programmer for Red ­Eye ­Studios.

The added schooling had the unintended benefit of giving Happ a more holistic understanding of the game development process. As both a programmer and an animator, Happ understood how the assorted elements of a game came together during development. After nearly 10 years in the industry, working on titles like Crash Nitro Kart, NFL Street 3, and Tiger Woods PGA Tour 09, Happ felt a growing itch to create a game entirely on his own. He knew he had the talent; all he needed was the dedication and the time.

Happ started collecting his thoughts on paper in 2010 – not in words as much as in form. “I actually created 90 percent of the art assets for Axiom Verge before I’d ever written a line of code,” Happ says. “I knew I’d get distracted later on if, while coding, I had to switch context and start ­drawing ­again.”

A child of the ‘80s, Happ wanted to create a game that paid homage to many of his favorite games from the 8- and 16-bit era classics. He dreamed of a game that would mash the combat of Contra, the grapple mechanic from Bionic Commando, the vehicle sequences from Blaster Master, and the iconic discarmor weapon from Rygar into one ­super ­game.

As development continued and ideas coalesced into code, the game started to take on its own personality. “As I drew the maps it started to look more like the original Metroid,” Happ says. “I really liked the idea of tiled environments that actually looked like tiles. I decided the main weapon would be more versatile as a firearm rather than melee, and I started to incorporate a variety of weapons like what you have in shoot 'em ups.” Then there were the meta elements, which Happ kept coming back to, such as the idea of letting players intentionally glitch ­their ­game.

Bugging Out
Happ has always loved glitches. They seemed like windows into a secret world; ways for a player to skip past the fenced-off confines of a designer’s world and step into an unexplored country of computer code. What if he could make a game that allowed users to glitch their game at will?

Working meticulously, Happ has designed Axiom Verge to “glitch” on purpose. As players wander through his world they slowly begin to notice areas that look “wrong” – pieces of the environment that flicker – mangled or corrupted tiles that look like garbage code. These are an important element of the game. About a fifth of the way through Axiom Verge, players recover a tool called the Address Disruptor, which allows them to either clean up these areas or make ­them ­worse.

The Address Disruptor also affects enemies. For example, the Address Disruptor turns one enemy into a platform, allowing players to reach new areas. Other glitches might cause the code within a wall to breakdown, letting a player phase through into another room. Happ has even added a Game Genie-like passcode system that lets players experiment with different passwords that might create oddball effects or even break the game.

Happ wouldn’t explain the ultimate cause of all this glitching, but it likely plays into Axiom Verge’s plot in some significant ways. “When I started dreaming about the project, I had been thinking about the nature of reality; how all physical laws are basically a set of rules for operating on data, and how the general consensus is that our universe is comprised of a lattice of discrete connected points and operates like a cellular automata,” Happ says. “I wanted to make a game with that as ­a ­backdrop.”

The opening of Axiom Verge follows a scientist named Trace who is caught in a building collapse before “waking up” in a strange otherworld. The environment around him looks futuristic yet old. Trace can see remnants of a human civilization, but no one is currently alive to inhabit them. The only other characters he encounters are monstrous mutations that may have once been people, but now only seem interested in tearing into Trace’s face. If Trace wants to figure out the nature of this alien landscape – as well as how he got there – he will need some impressive firepower.

Fortunately, the world of Axiom Verge has firepower in spades. As players explore Axiom’s Metroid-like maps, they can collect over 20 weapons and 60 other items and power ups, giving Trace a range of destructive tools. For example, the Multi-Disruptor is a spread-shot gun that annihilates enemies at close range, the Kilver chain-lightning gun is useful for clearing the screen of smaller enemies, and another weapon hugs terrain and can wrap around corners to whack enemies before they have a chance to get a bead on Trace.

“My favorite is the Ion Beam,” Happ says. “It’s basically a laser, but it’s a hell of a lot of fun to point at destructible tiles and blow up a whole bunch ­at ­once.”
The power nodes scattered through the world increase a weapon’s damage, while range nodes increase how much ground a projectile covers. Size nodes increase the projectile size, and in turn offer up greater damage coverage.

Weapons are really only programs that run on Trace’s main gun – an arthropod-like firearm – so the upgrades extend to every weapon Trace collects, meaning all weapons level up at the same time. As players explore Axiom’s haunting environments, they’ll also want to explore their arsenal – switching back and forth between weapon programs throughout the game depending on ­the ­situation. The Home Stretch
For over four years, Axiom Verge has been Tom Happ’s labor of love – an evening and weekend hobby that has slowly taken shape into a game. By late 2013, Happ’s hobby project had started to attract some of the biggest publishers in the industry. Sony, Nintendo, and Microsoft all met with Happ to get a better look at the game, he ultimately shook hands with Sony, who awarded Axiom Verge an indie pub fund scholarship in early 2014. This scholarship guarantees Happ Sony’s marketing support, as well as an advance on royalties once the title ships to PS4, Vita, and PC later ­next ­year.

“I'd intended to get a business loan and just go for it full time from there, but it turns out the interest rates on this kind of thing are huge, and as I talked with other indies, I found out that the loan application process would take months, which I didn't have,” Happ says. “So I switched to working two days a week at my former job to help cover insurance and some bills. Then the other five days I work on Axiom Verge. Unfortunately that adds up to seven days a week with no rest.”

The added toil has taken its toll on Happ’s mental and emotional health, but the extra focus on Axiom Verge has been valuable. Over the course of the last eight months, Happ has made more progress on the game than he did during the first four years of development. Which is saying a lot, because when Sony awarded Happ its indie pub fund scholarship, the game already looked like one of the most promising titles on ­the ­horizon.

Not only does Axiom Verge play like many of the classics it seeks to emulate, but its fast and furious action, array of creative weapons, and imaginative use of glitching create a genuinely new experience. Fans of 8- and 16-bit classics should hope that nothing unfortunate happens to Axiom Verge’s polymath designer before its 2015 release, because if Tom Happ gets sick, goes on vacation, or becomes obsessed with some passing fancy, then all work on Axiom Verge grinds to a halt. 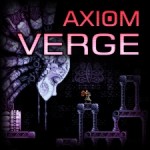