This game might have the best theme song ever produced for a video game.

Was that hyperbole? Well, it's only appropriate when you're talking about a game called Awesomenauts. The upcoming XBLA and PSN downloadable game is set to release in late 2011. You play as part of an elite mercenary team  (the Awesomenauts, we presume) as they fight for the spoils of war in the war-ridden future year of 3587.

The game mixes 2D platforming with battle arena gameplay. Supporting three players locally or up to 6 online, Awesomenauts pits players against one another to win the day. Customizable skill sets and over 100 items keep up the variety.

The developers at Ronimo Games say that the game is "inspired by classic, Saturday-morning cartoons from the 80's."

Just watch the trailer and we think you'll get the message. 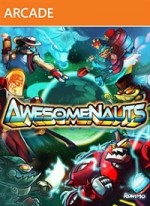