System Era's Astroneer is an upcoming space adventure game, similar in gameplay to Minecraft and No Man's Sky, with a low-poly aesthetic. In Astroneer, you play as an adventurer seeking riches and distant treasures on foreign planets.

Similar to the themes in last year's film The Martian, you must find a way to sustain yourself on planets that have harsh living conditions. You will be able to mold the ground and environment around you the way you see fit, so that you can dig, sculpt, and create your own world. "Every cubic inch of every world is accessible to you," writes Brendan Wilson, co-founder of System Era in a blog post on Xbox Wire. "Excavate vast underground tunnels or create megaliths on the surface; the world is your Play-Doh."

As you explore, you'll uncover mysteries and discover strange things, from one procedurally generated planet to the next. "Astroneer is a game about exploration and creativity," continues Wilson. The game will support online co-op for up to four players, so that you can explore these new worlds with friends.

Astroneer will be added to Xbox Game Preview and Early Access on Steam as of this December. 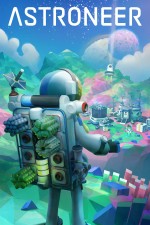