Ubisoft has just announced the next DLC batch for Assassin's Creed Brotherhood, called The Da Vinci Disappearance. This meaty content drop takes place after the Borgias are kicked out of Rome in Brotherhood.

A group called the Hermeticists have captured your good friend Leonardo, and are using him in their quest to transform mankind. You must not only rescue him, but also recover stolen paintings key to the quest.

The DLC features both single and multiplayer content, including:

Check out the screens, character art, and video below. A Team of Players Protecting a VIP in Escort mode A New Location in Single-Player 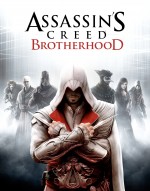