Ubisoft has announced that it is bringing Ezio Auditore da Firenze's adventures to current-gen consoles in the new Assassin's Creed – The Ezio Collection. The compilation includes the single-player campaigns and DLC for Assassin's Creed II, Brotherhood, and Revelations, with remastered visuals.

The trailer below showcases the games, providing an idea of what players can expect to see when the collection comes to PlayStation 4 and Xbox One on November 15.

The collection won't include any of the original games' multiplayer components. In a post on the Ubisoft Blog, the studio says it decided to stick with the single-player content since players can play what it considers the most polished version of that style of hide-and-hunt multiplayer in Assassin's Creed IV: Black Flag. 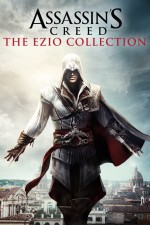