Today at GDC, I got to see a demo from Oxide Games' newly announced RTS, Ashes of the Singularity. It features an interesting approach to unit management, nicely lit explosions, and, oh, a few thousand ships blasting at one another with lasers and missiles, thanks to the studio's Nitrous engine.

The game's set in a far-off future, where mankind has transcended its flimsy physical husks in favor of an uploaded consciousness. Those post-humans are locked in all-out war with a rival faction, the A.I. Substrate. And as I saw, "All-out war," means more than few ships circling around and taking potshots.

Stardock brand manager Adam Biessener walked me through the demo, which was appropriately focused on the game's technology. [Full disclosure: Biessener was a longtime PC editor at Game Informer before working at Stardock.]

To say that there was a lot going on would be a massive understatement. It was difficult to register just how much was actually happening. The screen was absolutely loaded with hovering units, from nimble fighters to lumbering capital ships. The air filled with trails of smoke from missiles and constant streaks of light from energy weapons.

Biessener pulled back on the map, until the units were tiny dots, and I could see that what appeared to be the war was more accurately just a front within that war. He pointed out that I was looking at the smallest supported map, and even that would take some units 45 minutes to traverse from end to end. This demo, he said, had roughly 5,500 individual units on the map.

Managing your troops could be a potential nightmare, and Oxide is taking an approach befitting the game's scale. Players can select groups of units and assign them into what they call meta-units. These effectively function like a single unit in a traditional RTS, even though it's a teeming mass of individual ships working together. For example, if you have tanks and artillery in a meta-unit, the tanks will prioritize protecting their long-range allies.

It's an impressive piece of tech, but it's impossible to evaluate the actual game at this point. As I mentioned, Stardock and Oxide are wisely focusing on showing Ashes of the Singularity's impressive scale, so basic questions such as, "Is this thing going to be any fun?" will have to remain unanswered – for now at least.

Ashes of the Singularity is coming to early access this summer, with a full release this winter. 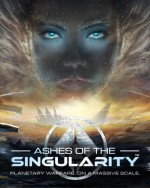