In my first hours playing Ark: Survival Evolved, I woke up half-naked and shivering in the waters of a mangrove swamp. I scurried to dry land to escape a primeval crocodile, only to plummet to my death off a ridge shortly afterwards. In a new life, I waded into the ocean to ward off heat stroke, angered a nasty fish, and drowned as I kicked frantically towards shore. Giant mosquitoes gorging on a titanic boa carcass swarmed around and killed me in a blitz of stinging. Respawning again, I crafted a primitive pickaxe, hoping to finally garner some protection. Right away, a giant scorpion stabbed me full of paralyzing toxins. Death followed quickly.

Each of these embarrassing downfalls taught me what it takes to stay alive in Studio Wildcard’s in-development dinosaur sandbox. Many others have gone through a similar crash course since June, when Ark: Survival Evolved entered Early Access on Steam. Take the exhaustive resource management systems from games like DayZ, H1Z1, and The Forest and add the ability to ride into battle on a Tyrannosaurus Rex, and the appeal becomes obvious.

Ark: Survival Evolved mixes first-person exploration and combat with resource conservation and monster taming to form a lively gameplay mix. At every turn, it tasks players with one immediate objective: survival. Dumped without explanation on a massive island teeming with prehistoric life, survivors face persistent threats from carnivores, natural hazards, and ever-changing weather conditions. If that weren’t enough, they also must sustain several onscreen meters that track fatigue, hunger, hydration, and other drainable stats. The game does its best to simulate the mundane drawbacks of everyday life – and that includes pooping. My character defecated periodically as I charted a path through the jungle, leaving behind round balls of dung. Like any sensible person, I picked these up and plopped them into my inventory. Human excrement apparently makes great fertilizer for the game’s farming system. You can even poop manually for a ready supply of the stuff.

Getting anywhere requires gathering resources and crafting. I started out punching down thin trees with my bare fists to collect thatch and wood, and harvested fiber and berries from groundcover foliage. New tools, weapons, clothing, armors, and shelters became available when I leveled up. It didn’t take me long to outfit my character, “Rex Raptor,” with a pickaxe, hatchet, torch, and slingshot. Eventually, the game’s arsenal evolves beyond the Stone Age, bringing crossbows, explosives, and firearms into play. It also becomes possible to construct stone fortresses, complete with vaults, ladders, towers, and creature pens.

Undeniably, the biggest draw is the chance to hunt, tame, and ride dinosaurs and other extinct beasties. As a novice tamer, I set my sights low and tried to befriend a lovable Dodo. I punched the hapless birdie out and force-fed it berries to max out its taming meter. But it woke up and waddled away, showing that I still have much to learn if I want to one day raise a dinosaur army. Success comes from figuring out what foods an animal responds best to and using narcotics or tranquilizers to keep it immobilized. Once tamed, players can level up their lumbering Pleistocene beasts or nimble raptors, and use them to ride, fight, store items, and defend loot from other players while logged out of the online mode. You can even take to the skies on a Pteranodon, among other flying creatures, to cover ground quickly.

Since early access launch, Studio Wildcard has kept up a steady flow of Ark: Survival Evolved updates, adding tools to craft and creatures (poop-throwing monkeys, anyone?) to tangle with. More recently, the developer implemented swamp and snow biomes to introduce environmental variety (and incidentally submerge or bury many player bases built on the altered terrain). In motion, the game doesn’t quite live up to its gorgeous promotional screenshots yet – I noticed a fair share of visual glitches while playing, though bugs and graphical quirks come with the territory in Early Access.

In games like these, it’s dangerous to go alone. Thankfully, you can form tribes with friendly players to help with hunts on online servers. While I was running around half-naked early in my playtime, one helpful player dropped packets of cooked meat outside his stronghold for me to gobble. Not all player interactions, however, are amiable. In the chat log, one user fumed that overpowered warriors from a rival tribe had killed off his pets multiple times. His friends contemplated starting a war. While I didn’t witness any toxic behavior firsthand, it’s hard to avoid in such a freeform game. Players have to come up with their own objectives and milestones, and dedicate abundant time to maintain and forge ahead with their virtual lives.

I ended my playthrough right on the cusp of gaining my footing in Ark: Survival Evolved. With a torch to light my way and provide warmth in the chilly night air, I stalked a coastline for prey. Suddenly, a Dilophosaurus – the same hooded predator that killed off Dennis Nedry in Jurassic Park – bounded out of the jungle to attack. I sidestepped its venomous spit and swung my torch until it broke upon the creature’s scaled flesh. Plunged into darkness, I sprinted to the beach, turning to face the lounging beast with my hatchet equipped. One blow from the stone axe was all it took. As the sun rose, I gloated over the dinosaur’s remains. Finally, I could climb to the top of the food chain in this harsh, untamed world. However, within minutes I had to make a narrow escape from a sabretooth tiger. When I stopped to rest, an oversized wasp skewered me with its stinger. 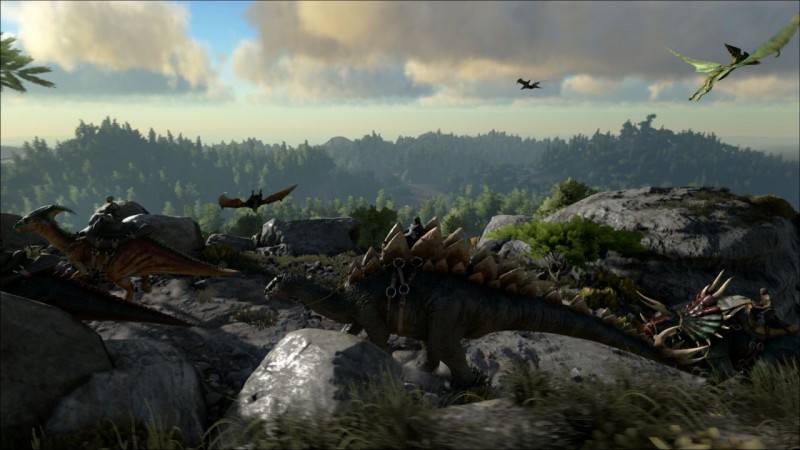 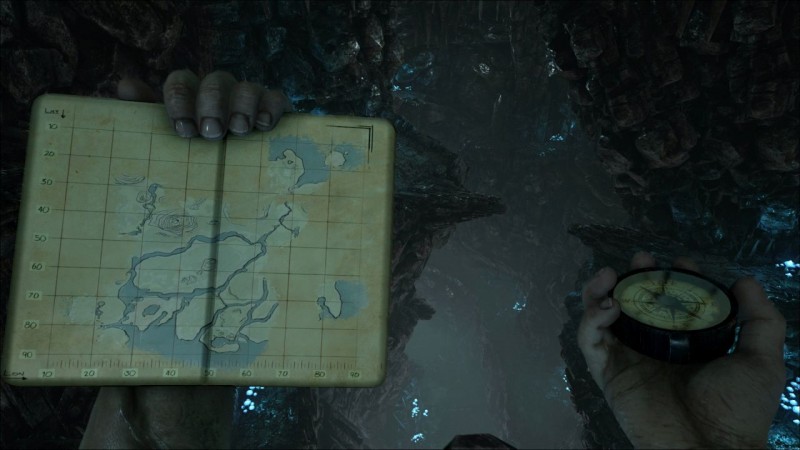 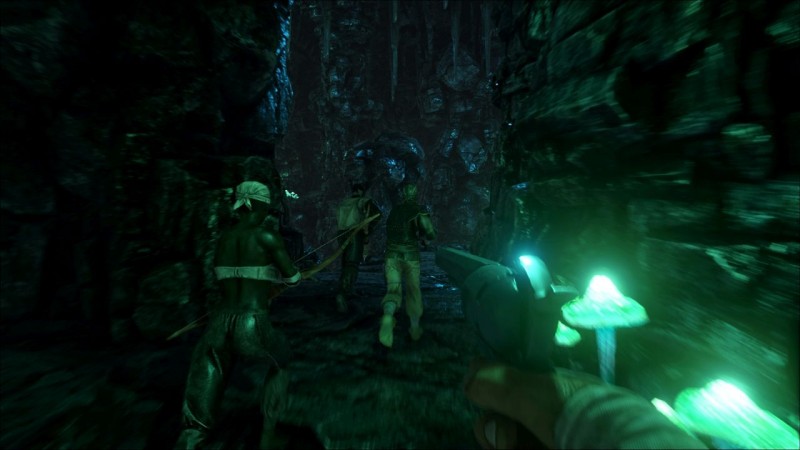 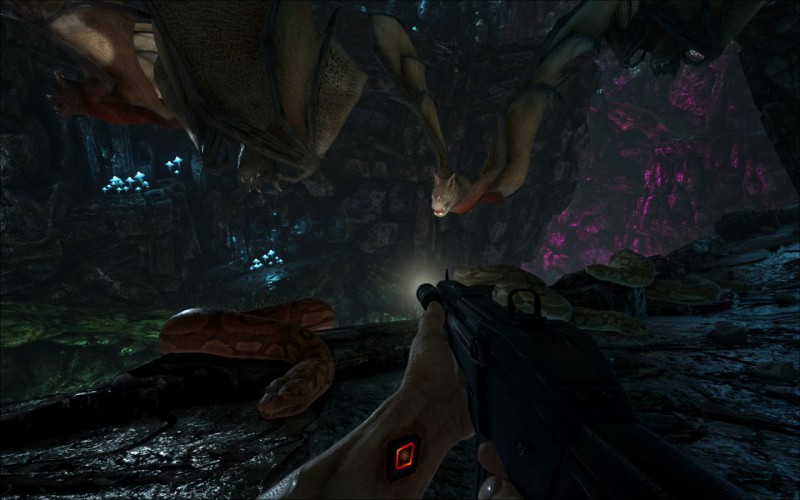 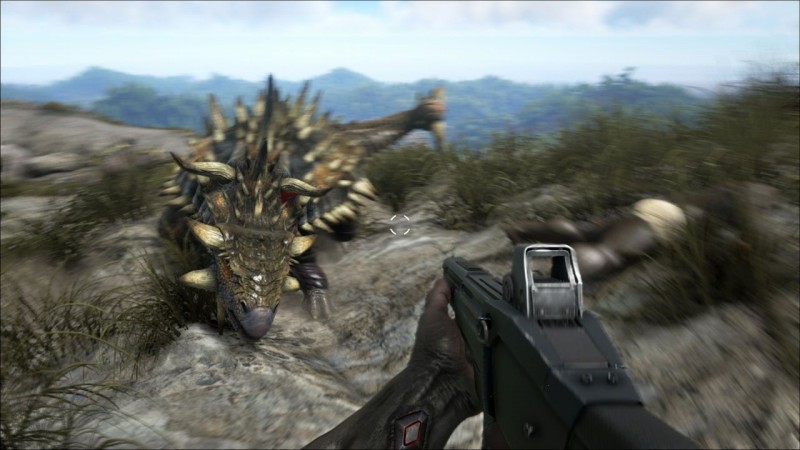 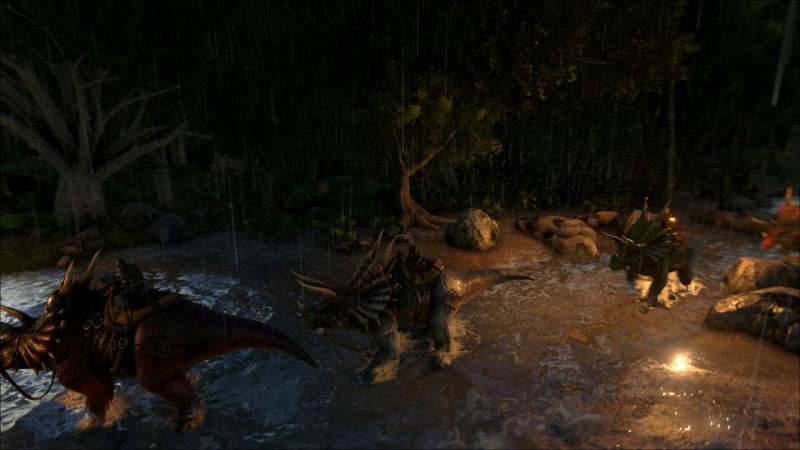 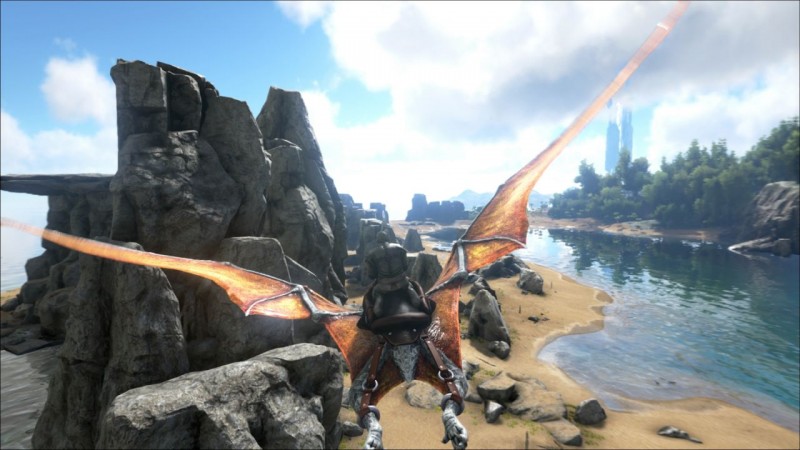 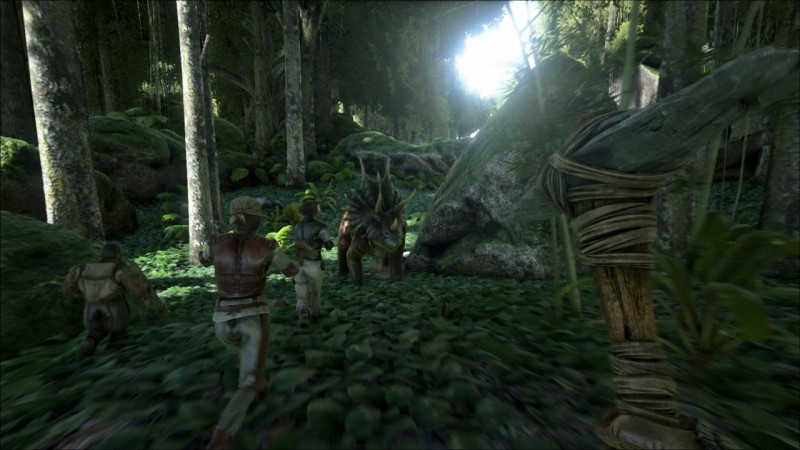 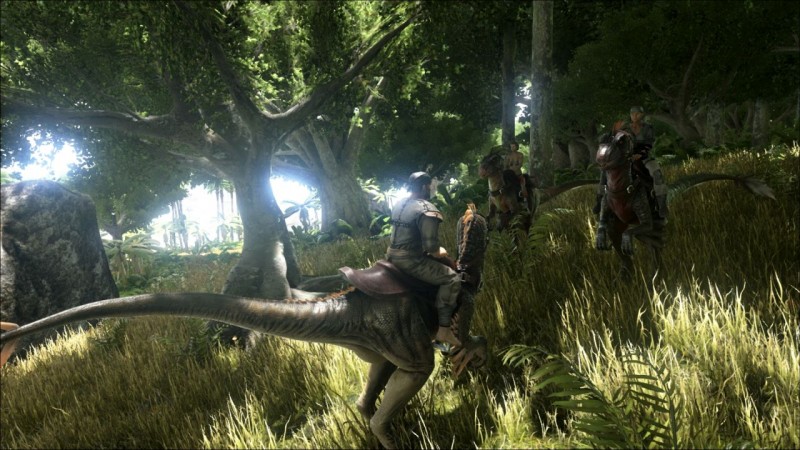 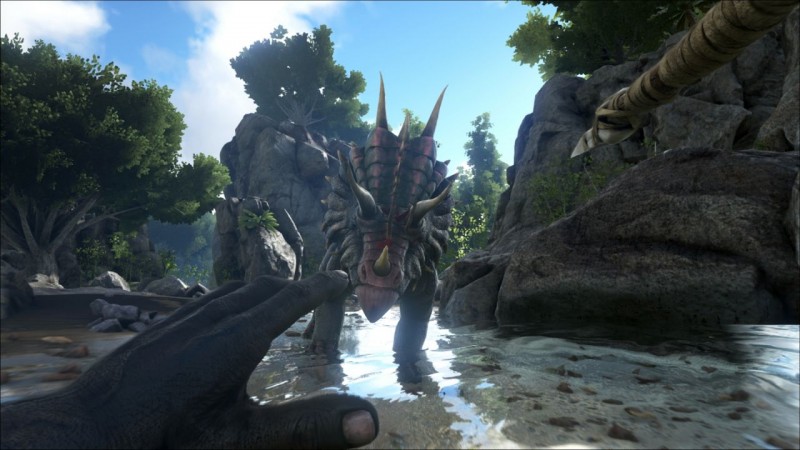 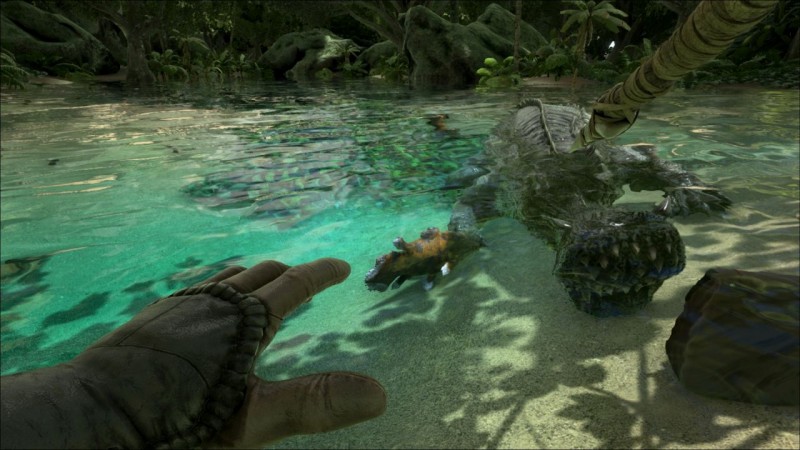 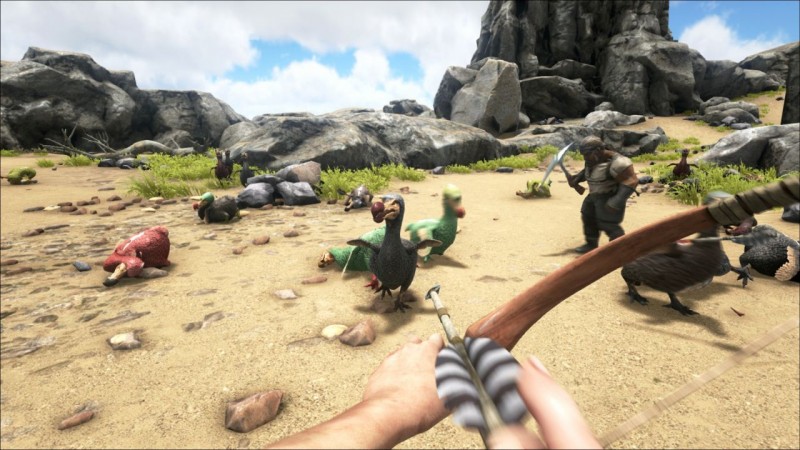 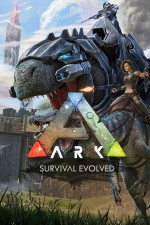