'Among The Sleep' Takes Baby Steps Onto Kickstarter
by Jeff Cork on Apr 18, 2013 at 05:18 AM
Publisher: Krillbite
Developer: Krillbite
Release: May 29, 2014
Rating: Not rated
Platform: PC Krillbite Studios' upcoming game Among the Sleep has one of those "Why hasn't anyone else done this?" concepts. Survival-horror games are at their best when players feel helpless, and they don't get much more helpless than Among the Sleep's player avatar. In the game, you play as a 2-year-old boy, toddling through his house at night as all manner of supernatural events transpire. The developer needs your help finishing the game, and they're turning to Kickstarter.

Because you are a small child, gameplay doesn't focus around combat. Instead, players have to hide from danger. Krillbite says that there will be a few puzzles here and there, but that the focus of the game is to create atmosphere and generate scares. Your character exists within the 3D space, so you'll be able to see your chubby little hands opening drawers and picking up objects, and your pajama-clad feet scurrying down stairs. 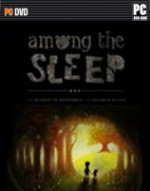