Creative Assembly's new Alien title, announced today, dials down the action in favor of the tense horror of the original Ridley Scott film.

Unlike many past games in the franchise, Isolation isn't about running and gunning - in fact, it's an experience more like Amnesia than AvP.

"Games in the past have looked at James Cameron's 'Vietnam in space' angle, but people haven't really dived into the wealth of the original source of Alien."

As a result, it's more of a survival horror game, casting the player as Ellen Ripley's daughter Amanda Ripley, who's being stalked by a single, fearsome xenomorph in the Sevastopol Station as she's on a mission to find out what happened to the Nostromo, the ship from the original Alien.

Using very limited weapons and the iconic motion tracker, you'll be much more the mouse than the cat. From what we've seen, it looks like the Alien game that's most true to the spirit of the series, and should hopefully help right the franchise's ship after its recent struggles. 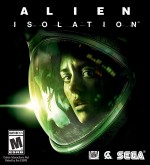