The enigmatic Mr. Scratch taunts Remedy's author protagonist, "You can't write your way out of this one, Wake. You don't get to change the ending!" at the close of this brief live action trailer. What does this mean for Wake's eventual fate?


Mr. Scratch is in many ways Alan Wake's evil twin, except with less whining about writer's block and more murdering people with knives for fun. Wake gets the unenviable job of chasing him down through the twisted Arizona town of Night Springs. 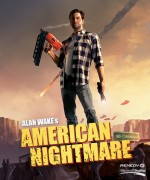