I enjoyed Saint's Row: The Third and its follow-ups, but was a little let down Agents of Mayhem's initial reveals. It certainly had the tone of Saint's Row, but seemed to be a different beast. I was able to go hands on with the game at E3 and am happy to report that it feels more like an evolution of Saint's Row, as opposed to a hard turn.

Volition describes the game and its narrative, which has bizarre alternate universe ties to the world of Saint's Row, as G.I. Joe versus Cobra 2020. It's a description that Volition actually got from a focus tester that was taking an early look at the game and it encapsulates exactly what the studio is going for.

You are a member of Mayhem (lead by Persephone seen above) who is fighting the dastardly Legion, which involves you and two partners taking out an assortment of boss characters. For my demo I tried to track down and defeat August Gaunt – a renowned Justin Bieber-style popstar inventor who is funded by the evil Legion corporation. Volition insists the similarities to the popstar are purely coincidental. Playing as a character named Hollywood, I was joined by Fortune (pictured above) and Hardback as I explored the open world. You can instantly switch between your three agents while playing at any time, even in the middle of dialogue. Every character will have different dialogue for different conversations, and you can switch among them while talking to people to get a little taste of how everyone would react to different situations.Holding up on the d-pad makes your specialized car appear automatically and you actually warp right into it, so there will, in theory, never be a need to steal a random car. It's way faster, and flasher, to just call your car to you, and I did it a lot. You also have a triple jump an assortment of specialized powers. he two most interesting powers I tried involved one that shot a giant rolling ball that would bowl enemies over, and one that placed every enemy around me in a floating ball, stunning them, which was especially handy during a combat sequence taking place in a busy club.

I also played a section of one of the singular agents' dedicated story missions, where you play alone. For my mission, I played as Oni, a John Wick-inspired former Yakuza member who was trying to save his family. His story was more serious, but some of the other characters I saw, like a german soccer hooligan, which much goofier, strange, and very much in line with the violent goofball characters of the Saint's Row universe.

I enjoyed my time with Agents of Mayhem, and was happy to see it functions well as an open-world single-player game. Previously I thought, "Why doesn't Volition just make a new Saint's Row?" but now I am excited to play in a new world with new characters, but with familiar Saint's Row gameplay and tone. 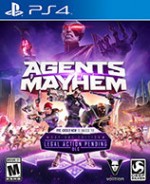