In Abzû, a third-person exploration game, you play as a diver lost at sea, probing the depths beneath to find out more about the world and yourself in the process. The vibrant art style (Journey and Flower's art director Matt Nava formed Giant Squid) and the creative premise made me excited to explore the unknown sea. With a summer release window, I went hands-on with the game to see how it's shaping up. Here's what I found most interesting. Swimming With The Fishies
Get ready to dive below and see schools of pastel-colored fish swimming around you. Giant Squid wanted to capture the magical experience divers have when they go underwater, and it truly is a sight to behold when you look beneath. Wonderment is all around; it's clear a lot of care and love went into creating this aquatic adventure. Tens of thousands of fish were rendered for Abzû. As I swim, sea creatures react to me and each other; I can even latch onto fish to see the world from their perspective. One recent addition is implementing a food chain into the game as a way to juxtapose the beauty of the ocean with its harsher realities.  I explore at my own pace and just watch the fish and see what they do; they all seem to have a life of their own. I watch as a bigger fish seeks out a little one, and in a moment, the smaller fish vanishes into the other's mouth. The controls are freeform and feel natural; you can swim in loops and stay underwater as long as you like. Giant Squid wants players to focus on the experience and not worry about their gear or how much oxygen they have left. Being Hunted By A Great White Shark
As I explore, I notice a vicious Great White Shark on screen. Giant Squad said you will see this shark repeatedly, as it's a central character to the storyline. Something about exploring this calming place and then having this shark come out of nowhere and disrupt it adds tension. It obviously rules this aquatic world and doesn't like my presence, but I wonder if there's more than meets the eye to the creature. Talking to Giant Squid, it looks like my hunch may not be that far off. "It's cool because we get to explore multiple facets of the shark's character," says Nava. "I think sharks are typically very one-dimensionally represented in media as killers in the ocean, so we definitely wanted to - like everything in Abzû - show many sides to him." I'm intrigued at how this all will play out, and like the idea of having this one creature in the sea showing up every so often. My first interactions with the shark are more frightening than anything; at one point, it came up to the screen and chomped on a drone I was using to guide me. The Mysteries Within The Sea
Abzû isn't just about hanging out in beautiful coral reefs. The ocean also holds its own mysteries and surprises. For instance, drones (as mentioned above) appear below and they will help you pass through certain barriers and access new areas. You also find magical undersea pools that warp the environment into a more fantastical landscape where things become surreal. In these pools, you can find upgrades for your diver, which allow her to swim faster. In your searching, you also discover places with architecture, sporting hieroglyphs that hint at the history of the world. You will find clues like these to piece together Abzû's world and its deeper lore. However, a lot of the story is open to your own interpretation, and Giant Squid expects many people will come to different conclusions about it. The Calming Effect
I can't talk about Abzû without discussing what a meditative journey it is, and that's one of the best things about it. Searching the ocean is a calming and relaxing trip; part of that is thanks to the game letting you go at your own pace, but another important piece of it is the orchestral music by composer Austin Wintory (Journey, Assassin's Creed Syndicate). It makes a big impact in setting the mood and capturing the surreal feeling of just drifting through the sea. Yes, the ocean holds its own harsh realities and Giant Squid wants to show the scarier side to it, but the tranquility of just watching aquatic life and seeing it in this natural environment is a nice change of pace from the chaos usually involved in games. Abzû is really just about inhabiting and discovering these serene spaces. I could feel the stress of my day just melt away while playing it. That's not something to take for granted.

Abzû launches this summer for PS4 and PC.

What do you think of Abzû so far? Let us know in the comments below! 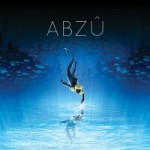