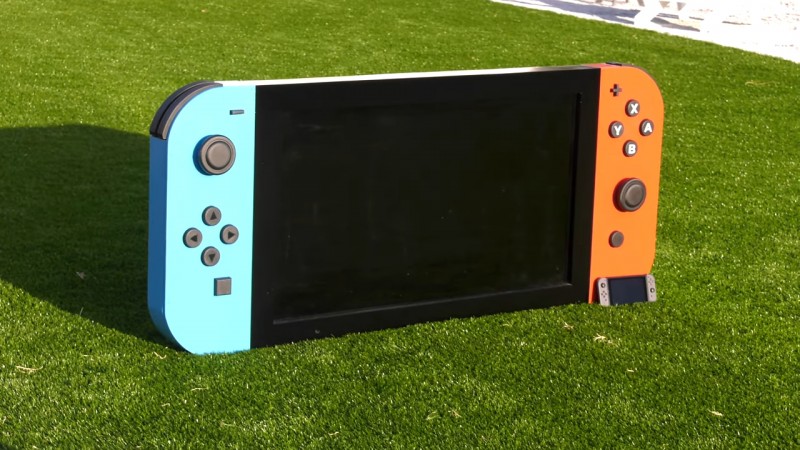 Michael Pick, an engineer that documents his electronics-based DIY projects on YouTube, just posted a new video where he creates the world’s largest working Nintendo Switch. In the past, Pick uploaded videos about creating tiny PCs and inexpensive Tetris gaming rigs, but his latest effort is definitely his most impressive. And once the Switch was finished, Pick donated the hulking console to a children’s hospital!

The video above runs a little over four minutes, but you can tag along and watch Pick’s entire process. “I really like the Nintendo Switch,” Pick says during the opening seconds of the video. “It’s small, it’s portable, but it’s really easy to lose and for me, that was a problem...so I decided to fix that by making something that was a little bit larger, and just a little bit harder to lose.”

Pick’s Switch is a 4K screen attached to two 3D printed Joy Cons. The entire console is 650 times bigger than normal Switches. At 70 by 30 inches, it weighs 65 pounds. Moreover, every button, including the bumpers, work. You can hook up a Pro controller or simply play with the massive Joy Cons that come attached; we’re hoping there’s no stick drift too. At the end of the video, in an incredibly heartwarming fashion, Pick decided to donate his creation to Saint Jude’s Children’s Hospital.

According to past reports, the next Nintendo Switch model will use Nvidia graphics card chips for a much crisper presentation. So while you’ll probably never get a chance to play Mario Kart on a massive Switch — unless Pick decided to make more copies — at least there’s a high chance that you’ll be able to play your favorite Switch games on a gorgeous 4K screen.