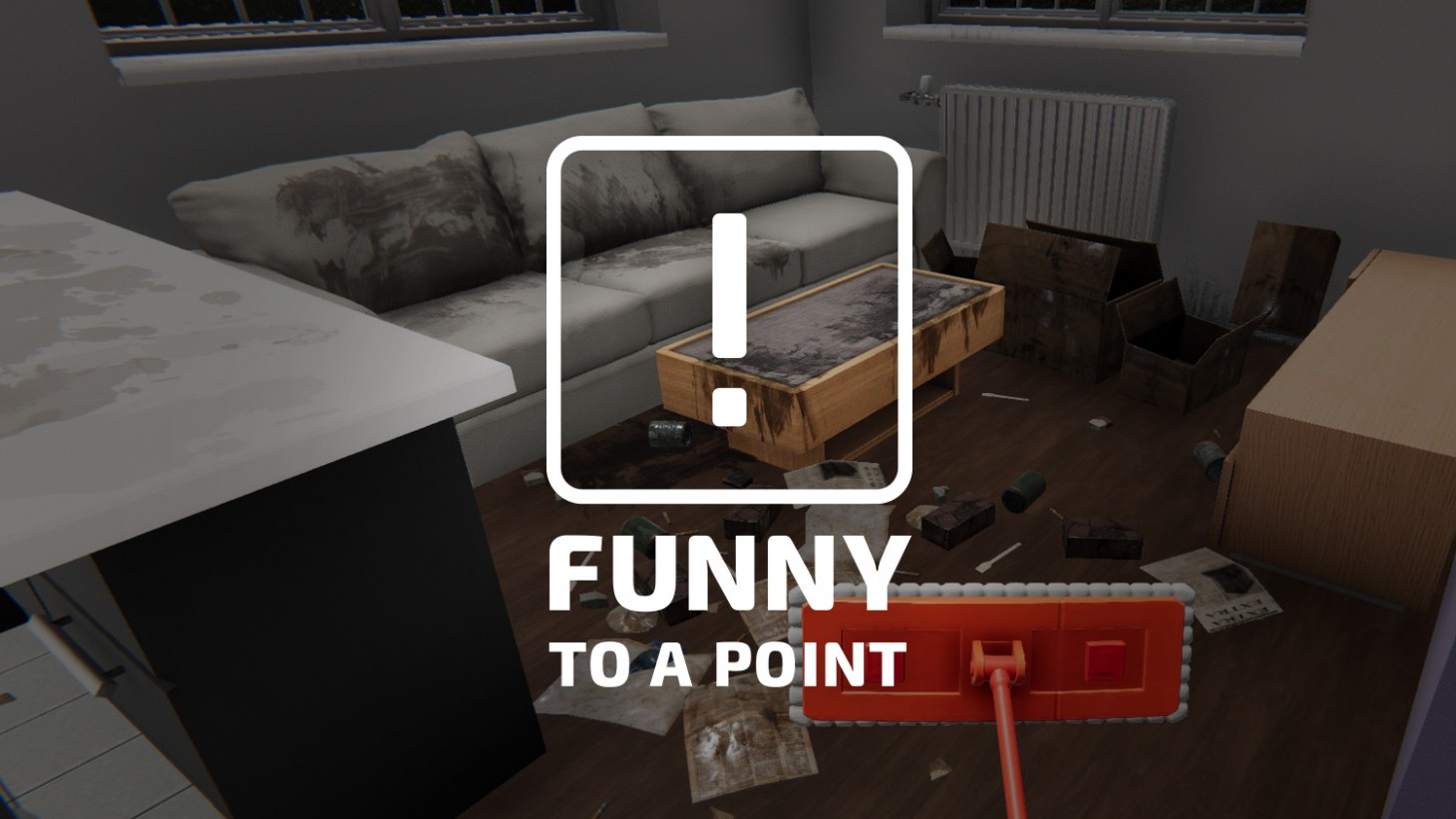 10 Real-Life Activities I Only Enjoy In Video Games

Video games serve up all sorts of fantastical adventures, from battling giant monsters to dungeon delving for untold riches to sexing up aliens instead of saving the galaxy. However, video games can also make mundane activities entertaining – way more than their stupid real-life counterparts.

My recent misadventures in Houser Flipper once again reminded me of a strange and unsettling phenomenon – I sometimes spend countless hours doing the virtual simulations of activities that I try to avoid at all costs in real life. How messed up is that? And what does it say about our society and our modern lives? Would we feel happier and more fulfilled if we broke free from these cheap digital emulations and instead focused on the real activities that inspired them in the first place? If you’re seeking answers to those profound questions, go bug Javy – I’m just the guy who points out the dumb similarities.

Without further ado, here are 10 real-life activities I only enjoy in video games: 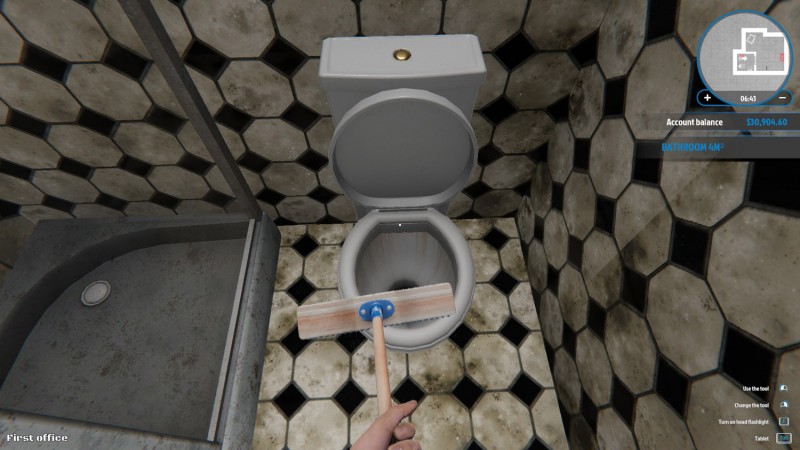 I already mentioned it a paragraph ago (seriously, are you even reading this or just looking at the pictures?), but House Flipper is the ultimate example of something I’d rather play in a video game than live through in real life. And unlike my wife’s HGTV obsession, I can’t even pretend that the virtual remodeling is educational – you clean toilets in the game by vaguely waving a push broom at them! You’ll never catch Joanna Gaines doing that – though Chip probably would, the big dumb idiot…

Anyway, House Flipper actually all that fun, so I only enjoy playing it slightly more than I do real housecleaning. But the idea of fixing up and redecorating virtual homes is surprisingly appealing to me. Maybe because it doesn’t involve multiple trips to Home Depot in the same damn day, or accidents that lead to other unrelated DIY projects – like the time I was cleaning out the refrigerator and managed to shatter one of the glass shelves into a billion tiny pieces. Why oh why doesn’t the real world have save states?!

Anyway, if someone ever does make a good house-flipping game, I would play the crap out of it – if I could first wrestle the game controller away from my wife, that is. 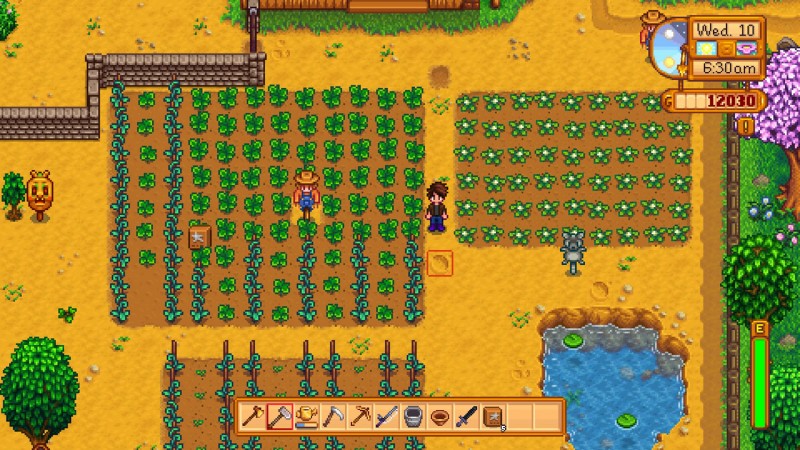 I hate doing yardwork only slightly less than housecleaning, but my love of the video game alternative is vastly disproportionate, as I described in exhausting detail last year. My Stardew Valley addiction has subsided since then, but even just thinking about it now makes me want to jump right back in. In fact, I bet I’ve got an assload of blueberries just waiting to be harvested … Dammit, Jeff, stay strong!

The cause of the disparity between my virtual/real-world enthusiasm for yardwork is pretty obvious – gardening in video games only involves a button press or two (if only my actual lawn was a 4x4 grid of squares!) and a few minutes of downtime. In the real world, there’s MONTHS of waiting, along with digging and sweat and jerk squirrels that steal your raspberries and then eat them on top of your neighbor’s fencepost while staring at you with their soulless dead eyes. The in-game economies in farming sims are always bonkers as well – if I could charge video game prices for the raspberries I get every summer (the ones the squirrel doesn’t eat), I could retire tomorrow! 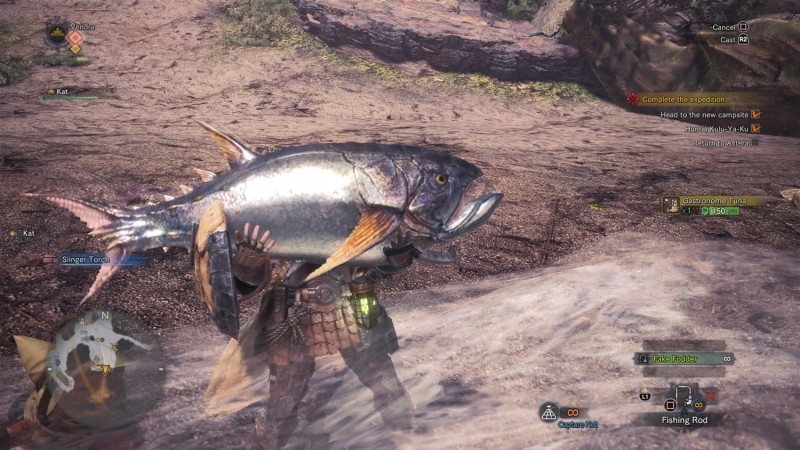 My dad loves fishing. I do not. We have differing opinions about why this is: I argue that dragging a small child out onto a lake before dawn and then holding them captive in the boat all day while the two of you DON’T catch fish, is a poor way to ingratiate them into the hobby. My dad argues that all the hours I’ve spent staring at screens has rotted my brain – which is probably true, but entirely unrelated. Either way, our disastrous father-son fishing expeditions haven’t curbed my love of fishing mini-games, which I flock to in video games like a moth to a flame. No wait, like a fish to a lure jiggy thing – dammit, it was right there!

Fun side anecdote: Last month, my wife’s favorite stupid mobile game added a fishing event, as yet another way to try and extort money out of its junkies players. She was hopelessly bad at it, but its similarities to Stardew Valley’s fishing mechanics made it a cinch for me – I’ve got 50+ hours of muscle memory for tapping a little fish icon into a moving bar! Once she realized that, I became her pinch fisherman – my dad might not approve, but at least my wife is impressed with my virtual fishing skills! 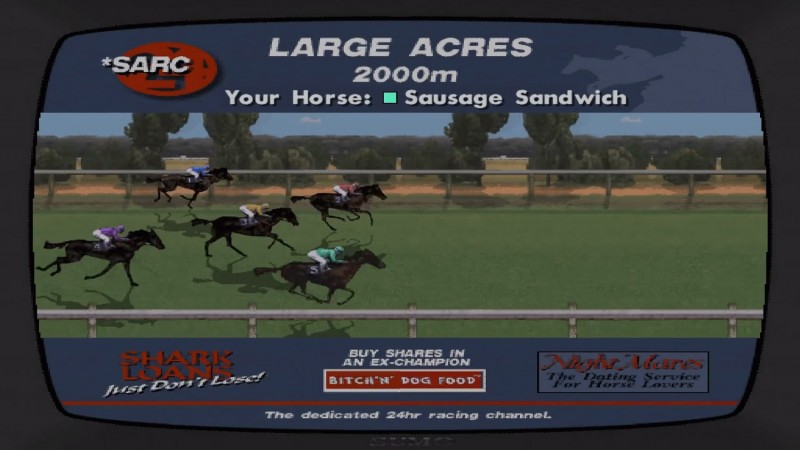 Finally, an example I don’t have to feel guilty about! This one dates back to GTA San Andreas, which taught me a life lesson that I am still genuinely grateful for: I would make a terrible gambler. Worse than The Gambler movie, even.

I had already amassed a multi-million dollar fortune in San Andreas the old-fashioned way – by dealing drugs and murdering people and winning the occasional dirt bike race up Mount Chiliad, which in hindsight is a strange side hobby for a gang leader. Anyway, I then stumbled upon San Andreas’ horse racing mini-game and devised what I thought at the time was a foolproof betting scheme. The rules were simple: Place a small wager on the horse with the longest odds, and if it loses, simply double the bet on the next race. And boy oh boy did it work! Then it didn’t, and I lost ALL my money.

Turns out this betting technique has been around since the 18th century, which means even hundreds of years ago people would’ve been calling me a dumbass. On the bright side, at least I didn’t lose a real fortune learning my lesson. 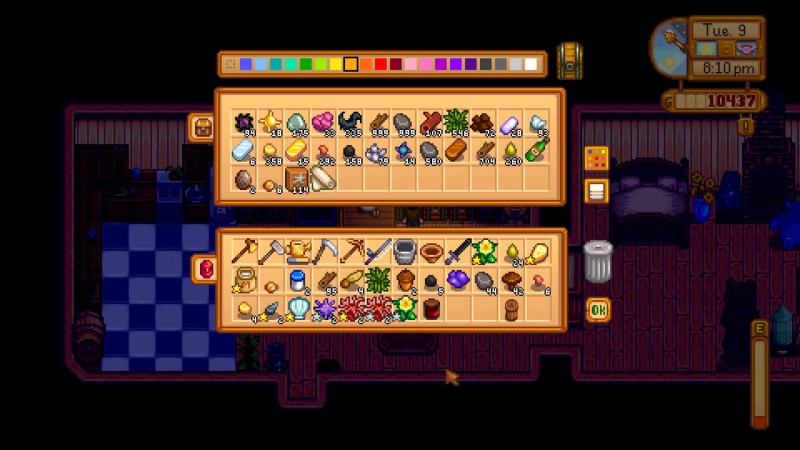 Confession: I am as much a hoarder in real life as I am in video games. My closets are just as packed with old random crap as my Diablo III coffers. The one difference? I only like organizing my hoarded inventory in video games.

And I take that organizing to ridiculously obsessive heights in video games. The shot above is just a small glimpse of my sorting madness in Stardew Valley. I believe what we’re looking at is my overflow crafting resources chest, where I have apparently stashed 999 rocks … because rocks are in such short supply in the game. I also have 335 bat wings, even though I’ve never once crafted anything with them – I don’t even know what you CAN craft with them. Not shown in the picture are my tools chest, valuables chest, primary crafting resources chest, refrigerator (which I only store perishable goods in, even though that’s not an actual game mechanic), dry goods chest, and the true miscellaneous crap chest.

In real life, they’re just all miscellaneous crap chests, much to the frustrated dismay of my wife. 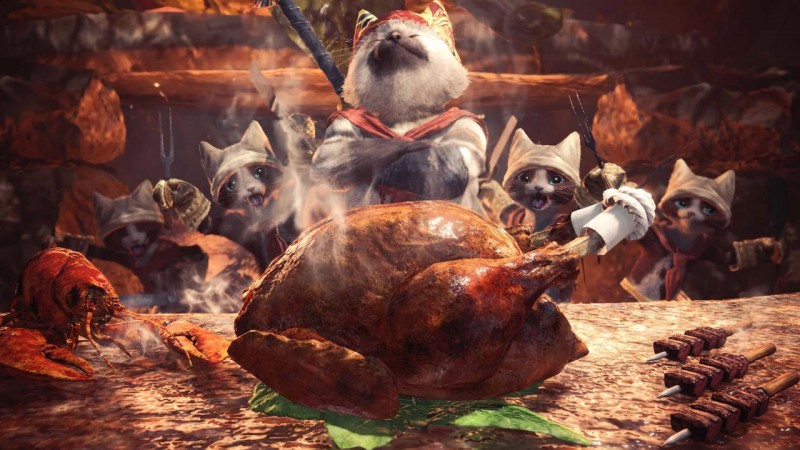 Don’t get me wrong – I try my damnedest to do my share of the cooking at home, and can make a mean plate of spaghetti, pot of chili, or … toast. What I lack in real-life that I have in video games, however, is a zeal to discover new recipes and experiment with different ingredients. That can mostly be chalked up to the nature of cooking in video games; usually different recipes offer up various stat boosts or other buffs. In real life, they all just fend off starvation for another six hours.

It doesn’t hurt that even the most complicated, three-star banquet (Michelin Guide was way ahead of mobile games) usually only takes a couple of button presses, or at the very most some Cooking Mama-style wrist wiggles. In real life I can’t even cook a pancake without losing my mind. 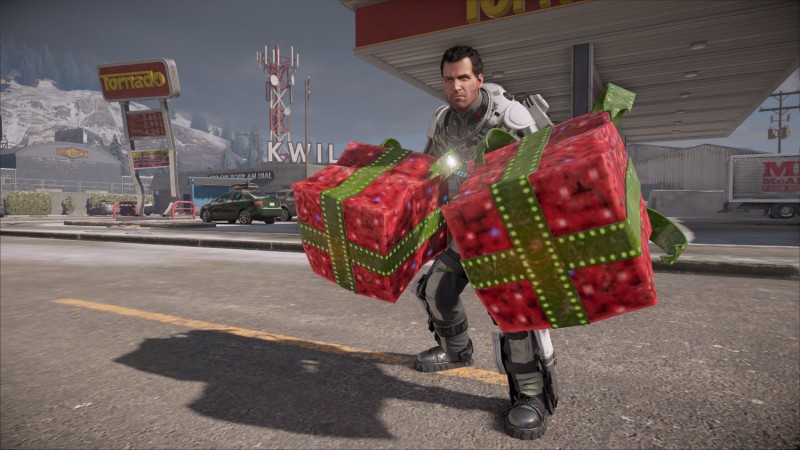 Another grim realization that stemmed from Stardew Valley: Virtual Jeff is way more considerate than real-life Jeff when it comes to A) remembering birthdays and special events, and B) buying good gifts for said events. I ran all over that stupid town tracking down seashells and melons – even diamonds for crying out loud! Who gives a friend a diamond on their birthday?!

In real life, I usually just spend an evening or two surfing Amazon while muttering how impossible my family members are to shop for. In my defense, I’d be a lot better if human beings came with video game-quality gift guides. Or if real-life loot boxes were a thing – “Here honey, open it up so we can see what I got you!” 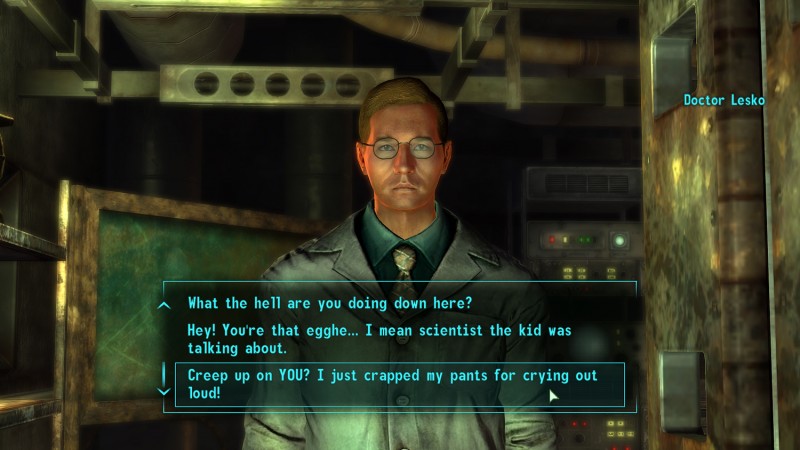 8. Talking To Other Human Beings

Again, it’s not like I can’t talk to people – but I sure as heck don’t run up to every stranger I see in real life and ply them with a thousand questions until their branching dialogue tree is completely exhausted. And really, why would I? I’ve met people like that in real life – they’re monsters! Aside from that, however, I have pretty much complete parity between how I talk with humans and video game NPCs – most chats involve me staring blankly at my conversation partner in complete silence while I mull over my dialogue choices, before ultimately settling on the “…” response – though "I just crapped my pants for crying out loud!" sounds a lot like me too. 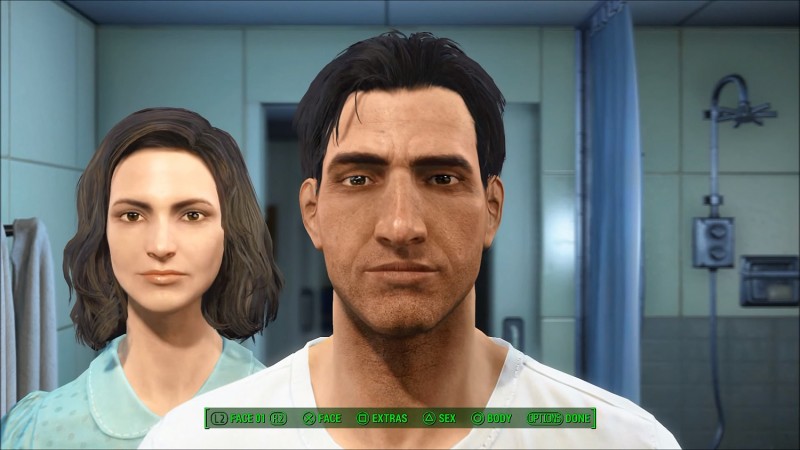 What the hell? This list is just getting personal now! Regardless, I can’t deny that I spend way more time looking at a character-creator screen than I do looking in the mirror every morning. I typically spend hours meticulously flipping between every facial feature, hairstyle, and clothing option available when creating a character – in real life, I get dressed in the dark and only trim my beard when I can’t stand it anymore (i.e., when it folds back up onto my face when lying on a pillow). Basically, my real-life charisma stat would be abysmal…along with my strength stat, agility – you know what, let’s move on. 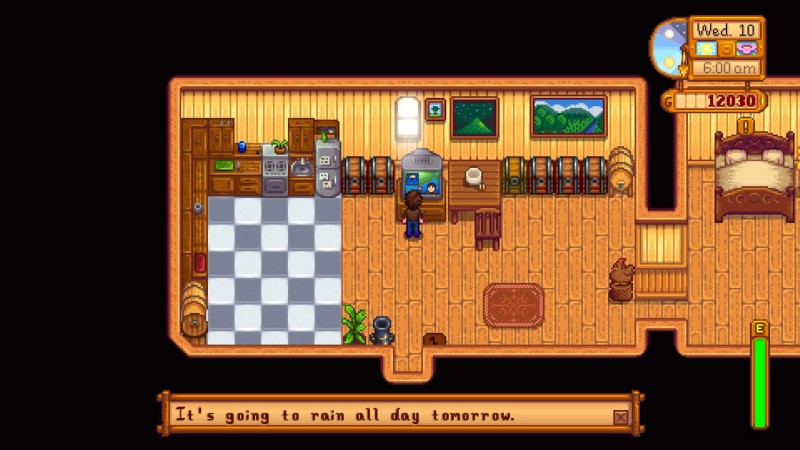 10. Doing Anything Other Than Playing Video Games!

This one isn’t as true as it used to be – I try to spend as much time outdoors as Minnesota summers allow – but there’s still the issue of resolve. If I had half the drive to get out and explore the open world we actually live in (“If you see it you can go there!”), I wouldn’t be playing video games in the first place! In fact, it took my idiotic obsession with Pokémon Go to convince me to lace up my jogging shoes and explore a bunch of new neighborhoods and parks (not to mention one creepy slaughter shack), and that game wasn’t even good!

In short, don’t be like me – put down the video game facsimiles and enjoy some real-life activities this weekend! Just make sure you come back for the next Funny To A Point, of course…