We make the process of picking a creepy game easy by providing different categories depending on what you’re looking for
by Kimberley Wallace on Sep 27, 2021 at 04:00 PM

It’s almost October, and you know what that means: We are in the mood for some spooky experiences in anticipation of Halloween. Video games have you more than covered in that department, but there are so many ways to provide scares. We've made the process of picking a creepy game easy by providing different categories depending on what you’re looking for, whether that's jump scares, an eerie atmosphere, or a twisted narrative. As a staff, we sat down and picked some of our favorites in these specific areas, giving you plenty of classic and modern choices. So, look below and pick your scare! 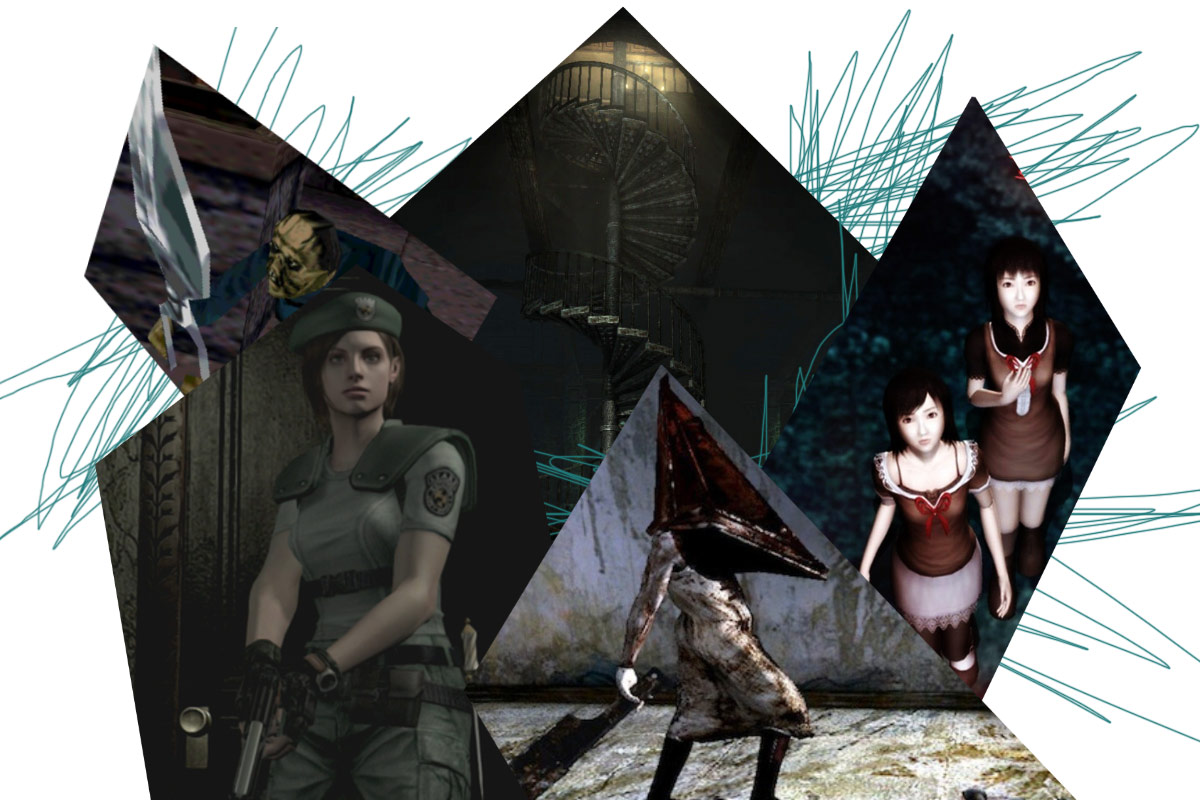 Sometimes you just want to play the classics! Seeing how the survival-horror genre has evolved through the years can be valuable, so consider these picks a history lesson in the most talked-about games at the top of the horror genre. This is your chance to see why. Silent Hill has had plenty of ups and downs, but Silent Hill 2 stands the best of the bunch for its twisted narrative and blindsiding endings. Fatal Frame II also takes the crown in its respected series; exploring an eerie town as sisters Mio and Mayu while learning the horrors of the “Crimson Sacrifice Ritual” is one of the most frightening experiences around. And while Penumbra preceded and established a lot of ideas found in Amnesia: The Dark Descent, Frictional Games really took things to a new level here. For Resident Evil, it’s hard to recommend people go back to the old-school original when the 2002 remake had better graphics and gameplay. Sadly, Clock Tower doesn’t have that option, so it will feel a bit antiquated, but it’s important to see Scissorman’s roots. 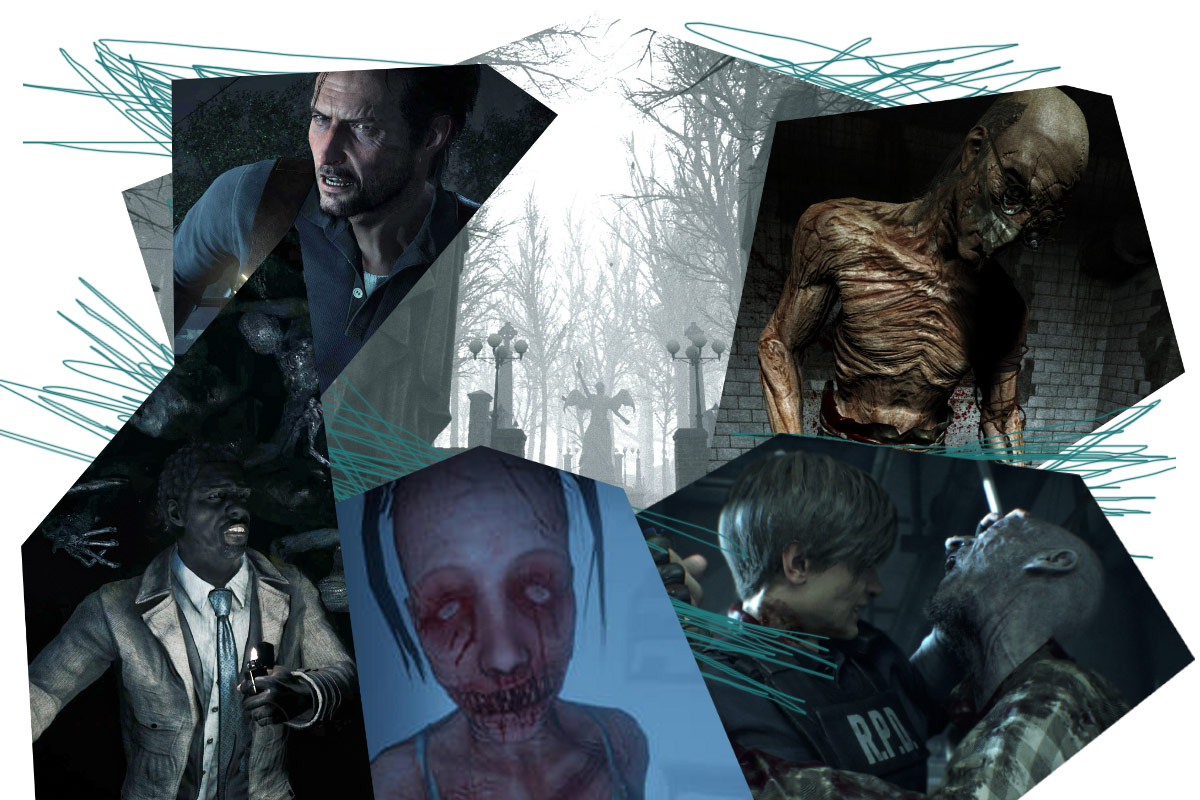 If you’re a fan of horror games, you’re probably up to date on the older titles and looking for something new. These selections are some of the best to hit the market in the last few years. Some highlights from our picks: Phasmophobia is currently in Early Access and making a splash, especially on Twitch, due to its four-player cooperative nature, letting you team up as ghost hunters and having your actions (and voice) affect your interactions with the deceased. Visage is a fantastic spiritual successor to P.T., where you explore an ever-changing house and discover its frightening past. Its first two parts are currently available in Early Access and it’s been well received. But you really can't go wrong with this year's Resident Evil Village. Capcom truly impressed here, with horrifying locales such as the dollhouse and Lycan caves, alongside big bosses like Lady Dimitrescu and Moreau. If you want a newer take on an older Resident Evil game, the Resident Evil 2 (Remake) is your best option. 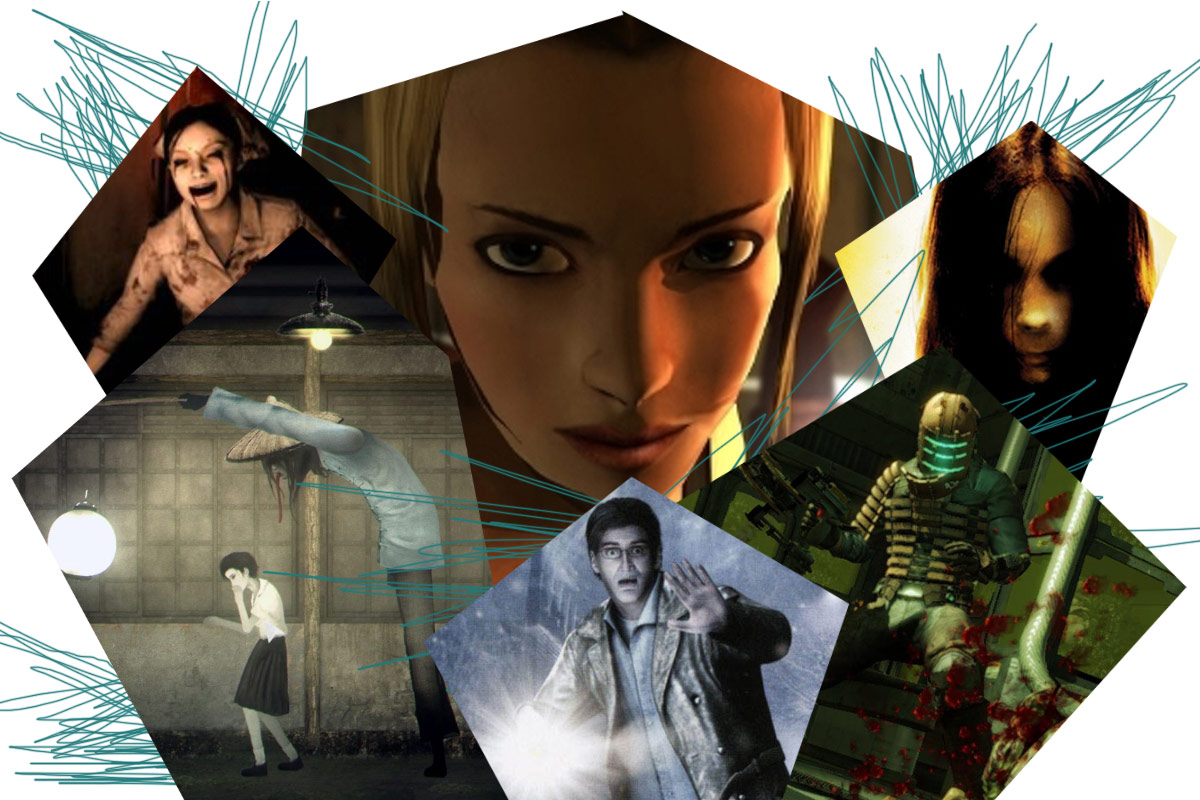 When done well, horror games mess with your mind, making you question everything you see and hear. Psychological horror is a popular subgenre, which made picking only a few for this category a daunting task (as you can see!). These games are great at making you feel uncomfortable and tapping into your psychological vulnerabilities. Many of these titles have sanity meters or effects in the way of auditory or visual hallucinations, but some take things further than others. Silent Hill: Shattered Memories cleverly administers psychological tests to analyze you, altering the gameplay elements based on your answers. Eternal Darkness straight up messes with you if your sanity meter gets too low, doing everything from subtle things like skewed camera angles to fourth-wall-breaking effects like a blue screen of death appearing or saying all your save files have been “deleted.” Any of these games will make you question what’s going on around you, as you try to piece together what’s really going on. 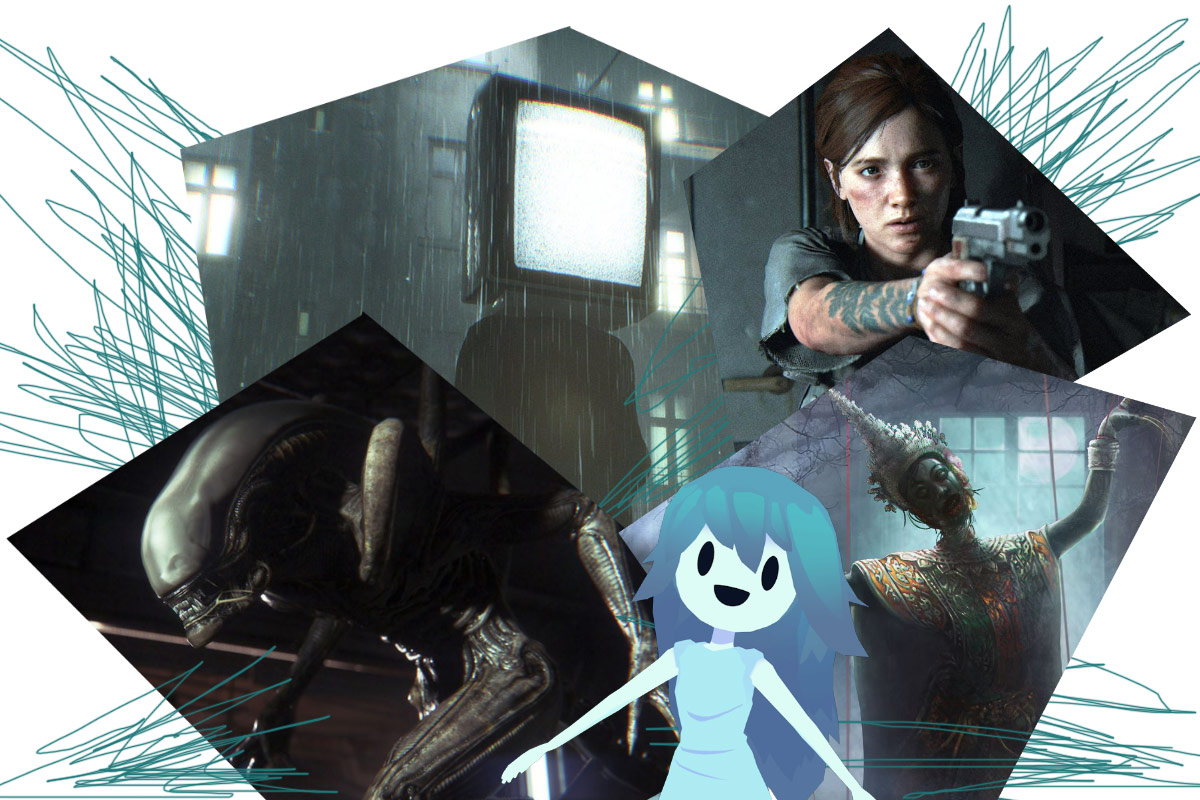 What makes a good scary game? For many, it comes down to the jump scares, which, let’s face it, are the most entertaining things to watch. When a game catches you so off guard it causes you to scream or jolt, it’s done something right. After all, we seek out these experiences because we want to be scared. However, pulling off a good jump scare isn’t an easy feat, and we actually found this category more challenging than we expected. Scary games can usually execute one or two of these successfully, but finding consistently throughout the adventure is rare. We felt the games above did the latter well, surprising us on more than a couple of occasions.

The Outlast series has made a name for itself in this area, but they tend to be more plentiful and bigger in Outlast 2, so we’re giving that the nod. Alien: Isolation is just a fantastic game of cat and mouse, so almost every time the alien grabs you is a jump-worthy moment. And while The Last of Us: Part II is more of a terrifying situation than a straight-up horror game, it had some good jump scares to sell its more intense moments. If that’s not enough, Spooky’s Jump Scare Mansion is a game devoted to just this element, challenging you to get through 1,000 rooms of terror – all in the name of making you move from your seat. 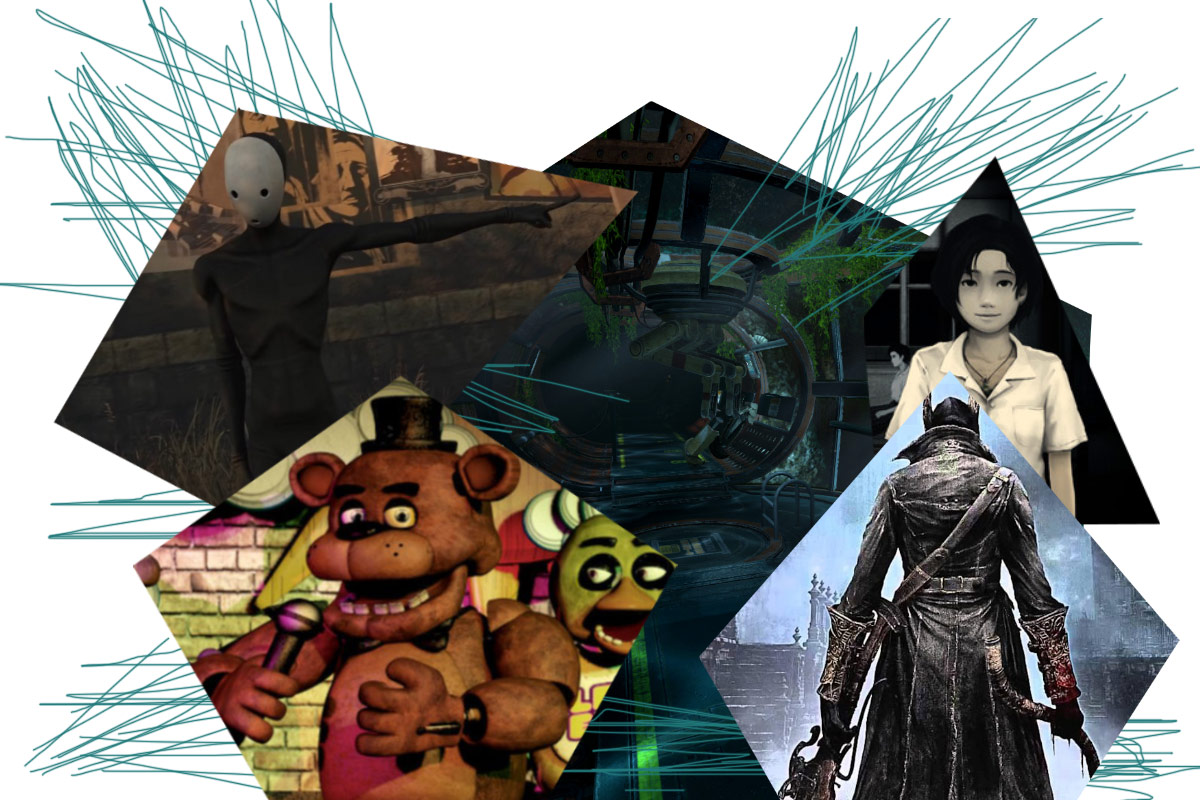 Any horror fan knows that a good eerie atmosphere can overshadow everything and come to define the experience. It is one of the most important elements for creating tension and selling terror. These games revel in their atmosphere and make it the core of the experience. Soma is a prime example of this, focusing on immersion by having you explore an abandoned underwater research facility, while Detention’s cursed school is a foreboding presence, slowly unraveling its greater terrors with surprise and delight. You can’t talk about Bloodborne without discussing its unsettling atmosphere inspired by H.P. Lovecraft, making the commitment to a pure horror aesthetic a big win for From Software. Any of the games on this list pull you straight into their settings. Yes, especially the one that locks you in with animatronic characters. We’ve all dreamt about that horrific encounter, Five Nights At Freddy’s. 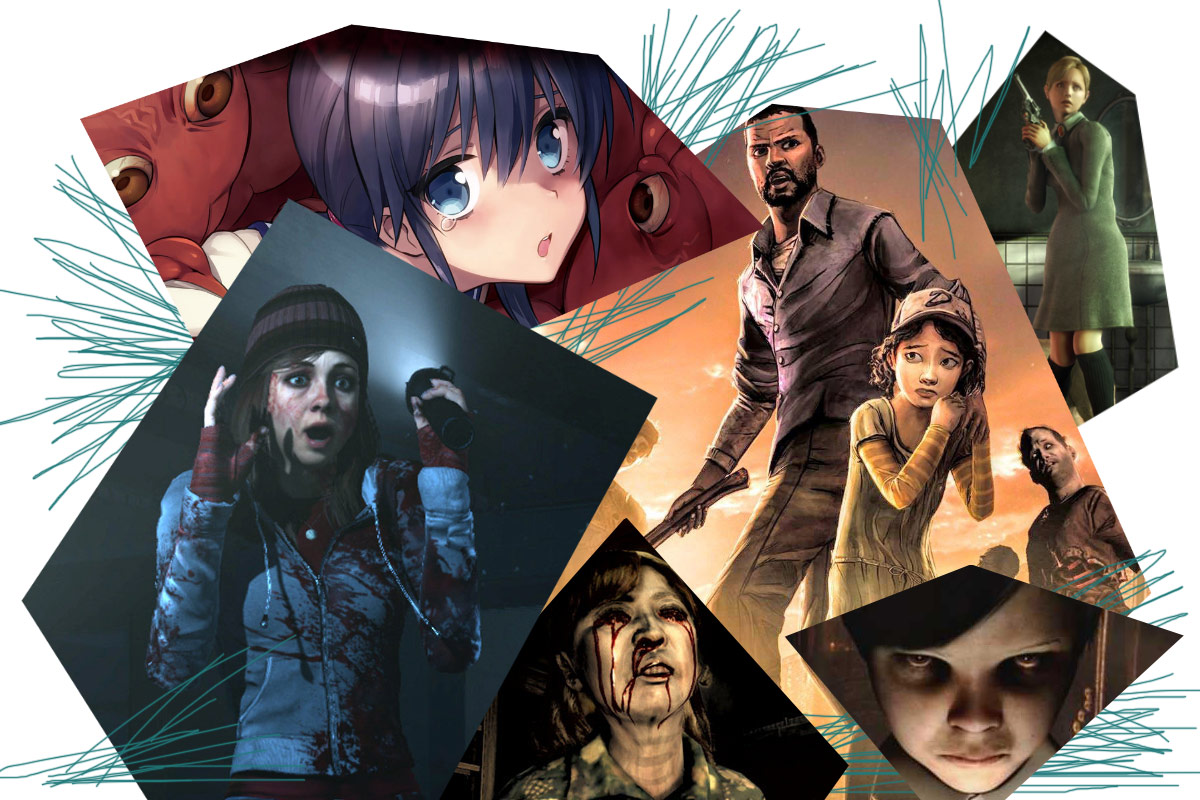 If you want a game that leaves you thinking about what the hell just happened, these selections will leave you with that feeling for many different reasons. Supermassive’s Until Dawn puts choices in your hands with branching paths and characters that can die in a flash if you’re not careful, but its story also wins you over for the way it embraces many different horror tropes and mashes them together. The Walking Dead delivers its terrors through the fear of losing an adorable little girl to a cruel zombie-filled world, with some memorable decisions along the way. Lucius doesn’t get talked about nearly enough; you play as the six-year-old son of Lucifer and murder members of the household. How’s that for intrigue?

In Fatal Frame II: Crimson Butterfly, you look on in horror as you watch sisters become targeted as a sacrifice for an ancient ritual, and things only get more demented from there. Rule of Rose is one of the most twisted tales on this list, as you explore a girl’s traumatic childhood in an orphanage, where you see how evil girls can really be, especially when a hierarchy is established. And adventure game Corpse Party is unlike anything else here, because it is equal parts disturbing and goofy. Spooky schools tend to bring that out in children. 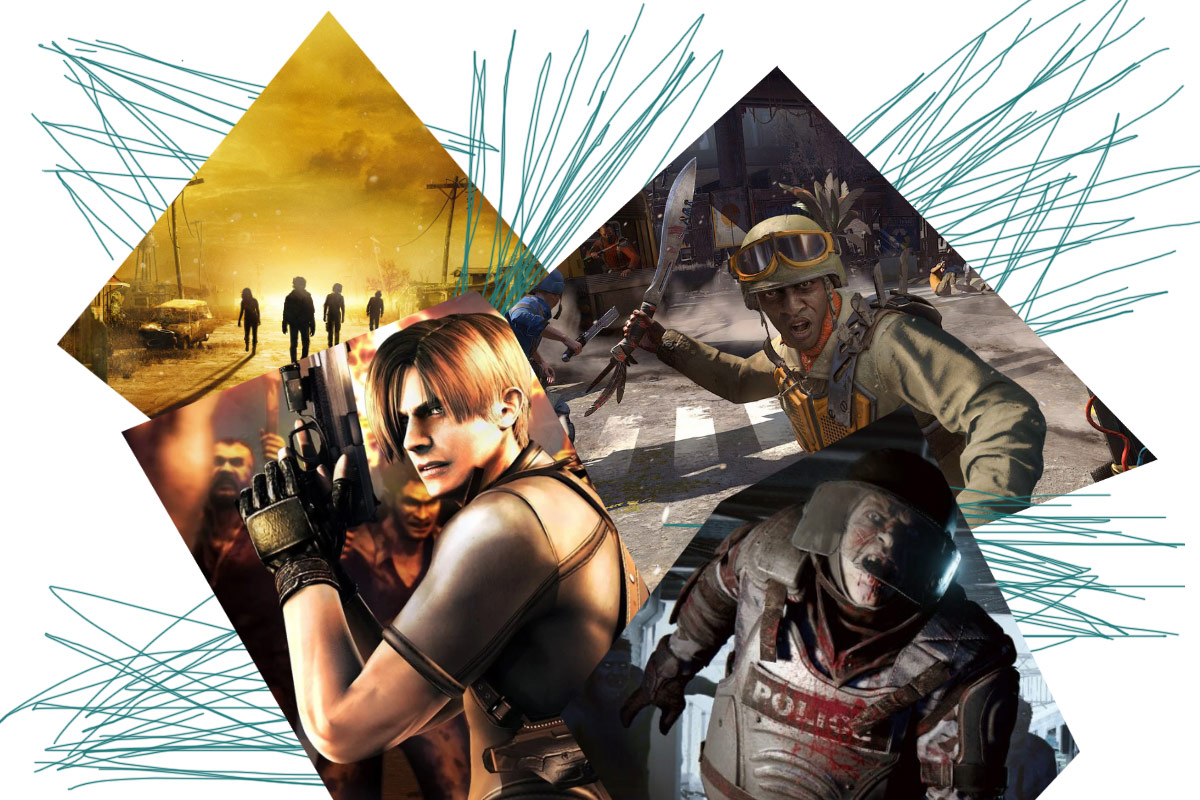 Look, sometimes we just want to mow down zombies. Nothing wrong with that! Prevailing against an endless horde provides an exhilarating adrenaline rush. These games put you against the worst odds, forcing you to conserve resources, find supplies, and do whatever it takes to survive a zombie outbreak. The Resident Evil series has earned its reputation for forcing you to sweat running it or gunning it. If you want something recent, we recommend the Resident Evil 2 remake, as Mr. X has never been more terrifying. However, there’s a reason why Resident Evil 4 is so widely acclaimed, so you can’t go wrong with that choice. Dying Light and State of Decay 2 allow you to explore open worlds and try to survive the day-to-day frights while building to bigger and better things. And if you just want to shoot zombies with friends, World War Z will scratch that itch. 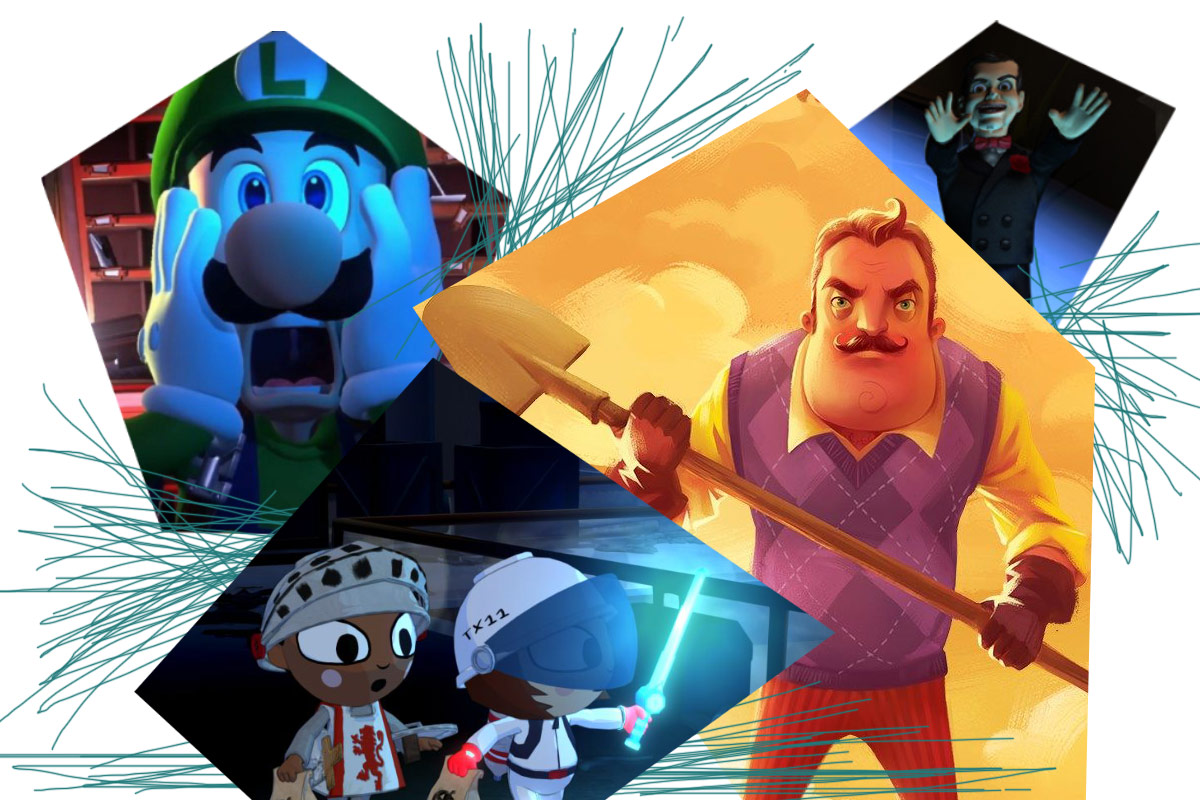 We understand that not everyone wants something quite so mature and gruesome, and you might be looking for something more geared toward a younger audience. This is especially important in a year where the current COVID-19 quarantine means we have to get creative about how we bring the Halloween spirit to the kids – the demographic that relishes the holiday and dressing up the most. Here are some more family-friendly picks that run the gamut of adorable to providing the thrill of visiting a haunted house.

The Costume Quest series has you collecting candy and costumes in adorable adventures, but Costume Quest 2 gets our nod for its gameplay improvements over its predecessor. You can never go wrong with a Nintendo game to play the kids, so the recent Luigi’s Mansion 3 is a great pick, especially with the addition of Gooigi and its expanded cooperative and competitive elements. Hello Neighbor is always a hit with the younger crowd; something about sneaking into a neighbor’s home and tricking him never gets old. And, there’s a reason why Goosebumps is still popular after all these years, and Night of Scares seems to captivate in the video game space.