When a new online gaming experience hits the market, the development team braces for impact. They want people to play it, the servers to hold up, and players to consume the content the way they intended. On that last note, players like to experiment, and some of their ideas are so outlandish that the developers didn’t even consider them. In 1998, an Ultima Online player thought, “What if I attacked Lord British?” Moments like these are rare, occurring in just one match or instance of a world, but thanks to players recording their games, they have become historic events that we can see online. Here are some of the best emergent stories that players have experienced in some of today’s biggest games. 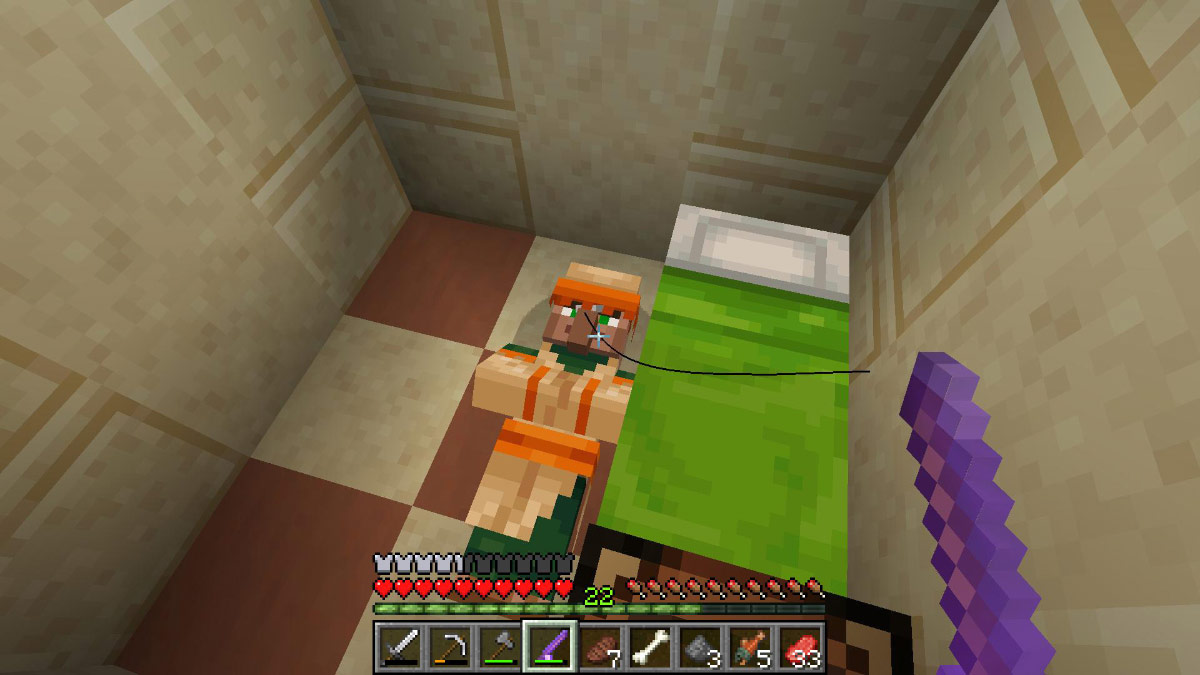 Ongoing games receive constant updates, sometimes breaking things you wouldn’t expect. When Minecraft introduced the Village & Pillage update, the world’s villagers, which were once kind and minded their own business, transformed into annoying home invaders. Even if a player locked their door, they would come home to find a villager sleeping in their bed, or worse, making love. Some of these villagers just happened to be headless, adding a bit of horror to the invasion. The Minecraft community banded together and collectively learned how to cope with the odd villager A.I. Fishing rods were used to lure villagers out of homes. Players also learned that the villagers had trouble going up stairs, so staircases were constructed in front of doors. Buttons were also used. In the short period before the game was patched again, Minecraft players feared a much bigger threat than Creepers. 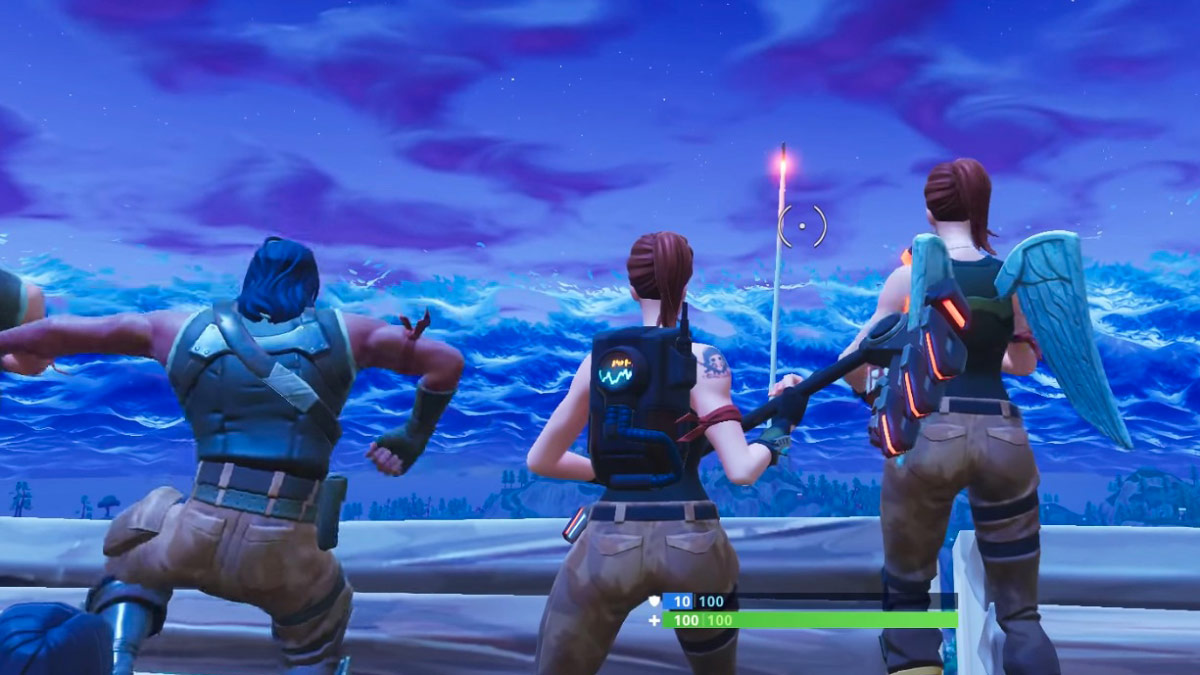 From the giant purple cube to a black hole shutting the game down, you never know what to expect from Fortnite. On June 30, 2018, players thought they knew what was happening. Epic announced that a one-time rocket launch would happen, and players lowered their guns to celebrate it together during a match. For the optimal viewing of the rocket, they worked together to build a giant wooden structure high in the sky. Everyone climbed on top of it and waited for the launch to commence.

What they didn’t know was a player named Elemental_Ray, who averaged just a .47 kill-to-death ratio, had other plans. As 48 players on the structure danced and partied with one another, Ray destroyed the ramp that kept the structure afloat, sending all of the players into a deadly freefall. In this one spectacular moment, Ray suddenly held the all-time solo kill record for all of Fortnite, but players questioned if it should stand given it happened during a time of supposed peace. 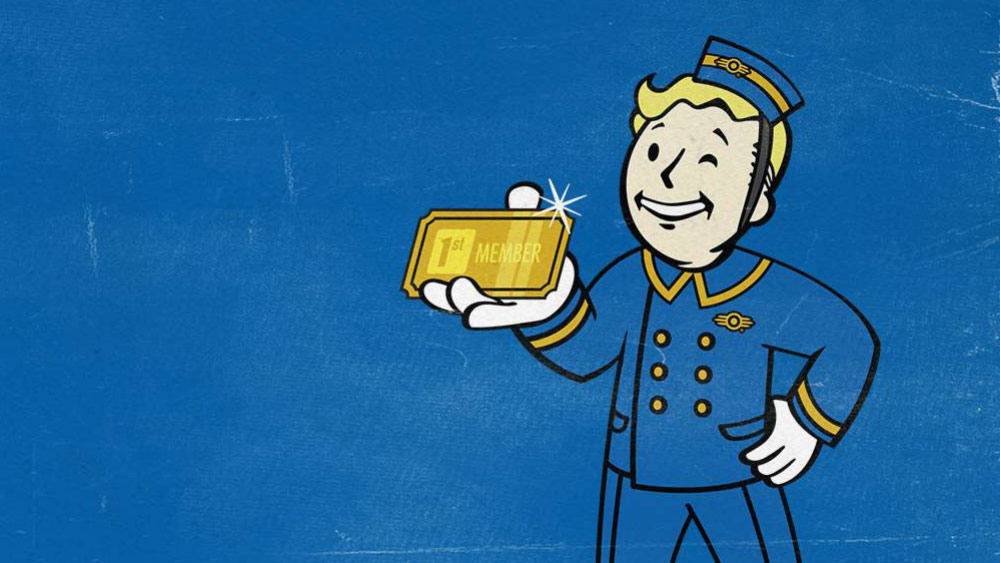 The poor rising up to take down the rich is a story as old as time, but it isn’t a plot line Bethesda Game Studios wanted to see unfold in Fallout 76. When Bethesda added a premium membership to the game called Fallout 1st, players complained that some of its content – like an expanded storage box and placeable fast-travel point – shouldn’t be hidden behind a paywall. Their irritation eventually bubbled into bloodshed in Appalachia’s wasteland.

Since players who purchase the Fallout 1st membership light up like a Christmas tree in the world, they became targets for groups of players who want it removed from the game. The peasants, as many of these aggressors called themselves, rose up to take down the rich. That humorous analogy led to the formation of a group called the Apocalyptic Aristocracy, which is home to roughly 1,000 Fallout 1st members. The description for their group includes a comment about peasants: “A peasant isn't simply defined by having $12 less a month, but by an attitude of entitlement to 10 years of content for the $60 they originally paid. A peasant doesn't play Fallout 76, but is in 76 groups to troll and harass people who do. A peasant expects and demands, divides and derails. They insult and attack those who subscribe, or those who play with subscribers. We aren’t these things.” 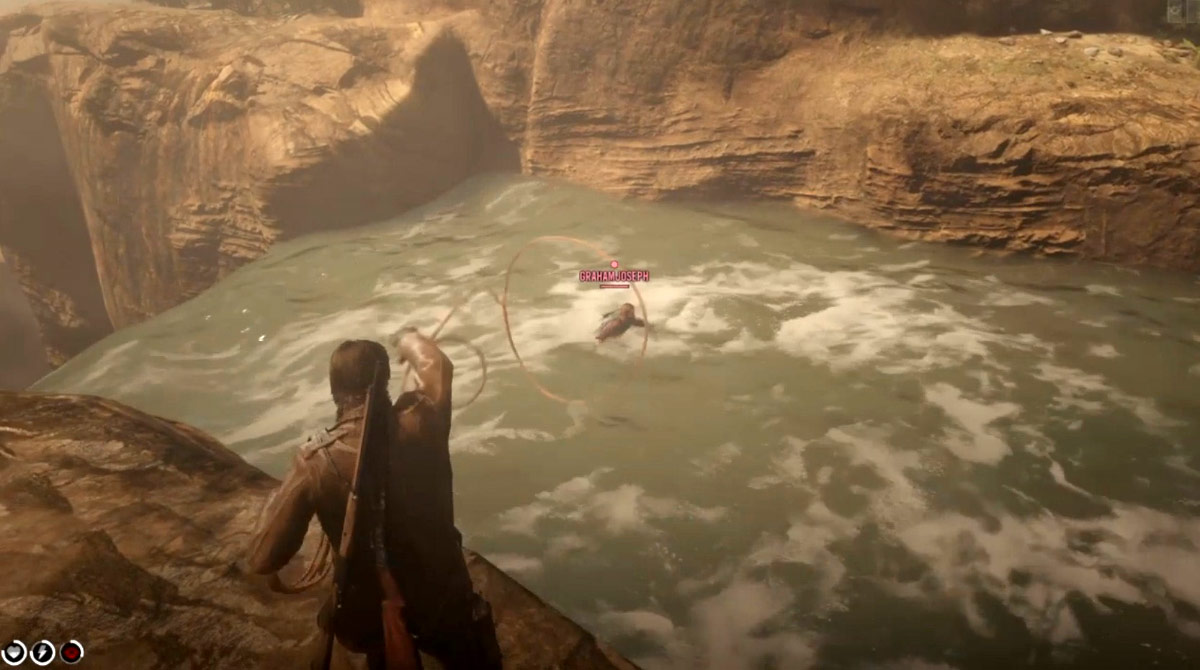 Quick thinking and even quicker reflexes led to Reddit user RocketSnailz saving a Red Dead Online player’s (virtual) life. RocketSnailz befriended a player named Graham Joseph across a river. After a friendly wave, Graham tried crossing the river on his horse, but the current was too strong, and he quickly found himself heading toward a waterfall. RocketSnailz ran along the shore, pulled out his lasso, and with perfect aim, wrapped it around Graham at the last possible second. Graham plunged over the falls, but RocketSnailz had him wrapped up, and was able to pull him up to a safe spot. They again waved to one another and a new friendship was born. This looked like a perfectly timed sequence from a thrilling motion picture, but it was just an emergent moment in a game born from a player showing kindness.

Over 5,000 Eve Online Players Unite To Destroy A Space Station

Eve Online has had so many great stories that they’ve been collected in books. One of this MMO’s greatest tales happened on December 10, 2016, when over 5,700 players gathered for a seven-hour battle that concluded with the destruction of a Keepstar Citadel, Eve’s equivalent of the Death Star. Pilots from all across the cosmos contributed, which was the first time a Keepstar was taken out, and also set a then all-time record for number of players in one system. The high player density led to the game chugging, but didn’t hold it back from delivering the awe-inspiring spectacle of a screen filled with warships at war. Over 2,000 ships were lost in the battle, which added up to over 270 billion ISK (Eve’s currency). 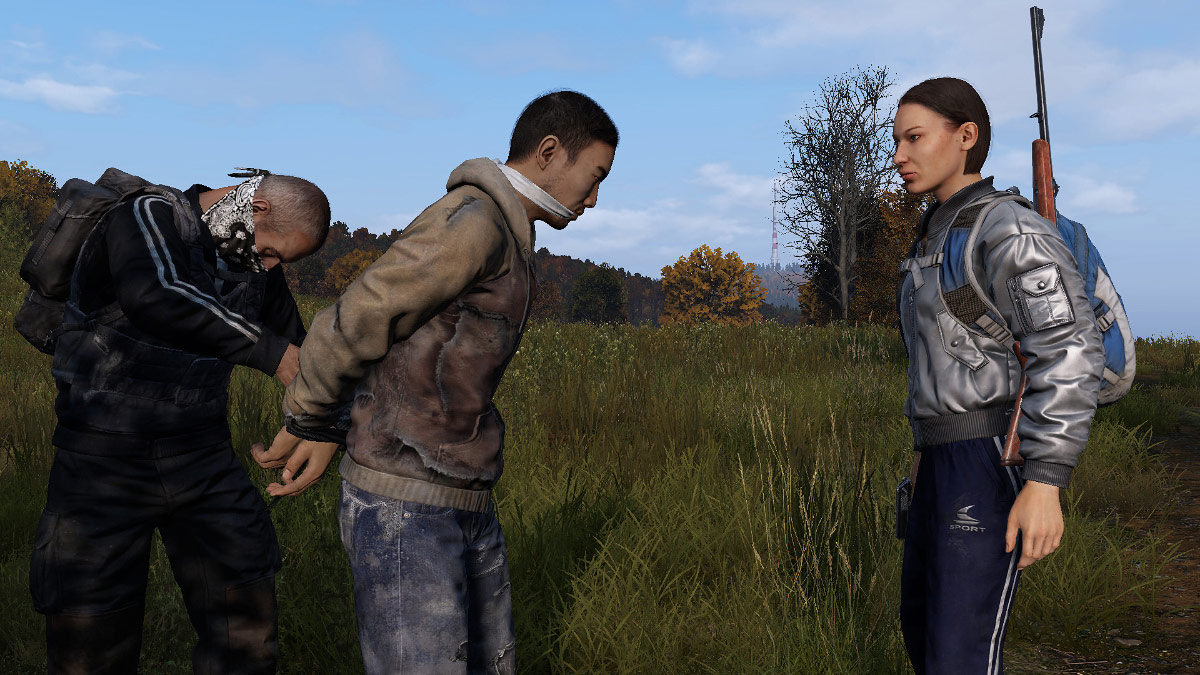 Voice chat can become a powerful weapon if a player uses it to manipulate the will of others. A player in DayZ named “Black Widow” used voice chat like a siren’s call. In distressed tones she would cry for help, and if someone responded, she would tell them that she was frightened, trapped in a house, and needed their help. She would lure players into a home and then kill them. As she did this, she alerted them that she was filming the brutal act. Black Widow caught players off guard and legitimately disturbed many of them, who took to forums to share stories. She became a legend and even rattled the cages of members of the development team, who never expected scenarios like this to unfold in their game. 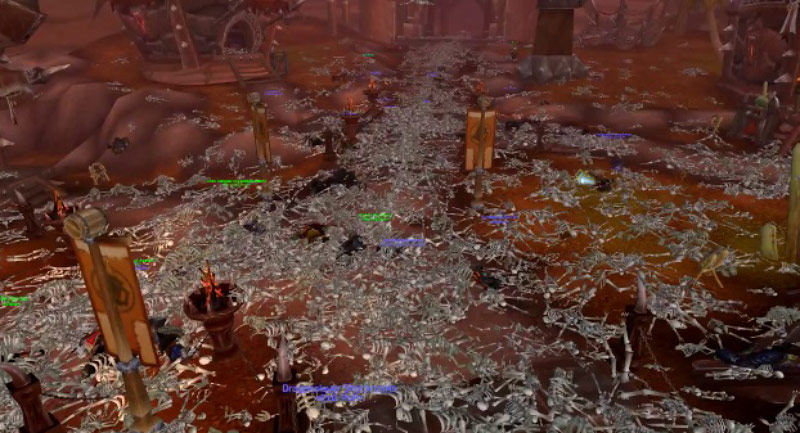 Hakkar the Soulflayer, World of Warcraft’s blood god, feasted upon players in September 2005 when Blizzard introduced the game’s first 20-player raid Dungeon, Zul’Gurub. When raid groups battled Hakkar, a player could be hit with a debuff, Corrupted Blood, that would drain their life. If they were standing next to another player, the disease was passed to them. Having your life drain away obviously made for a tough fight, but what Blizzard and players didn’t anticipate was that the disease could be passed on to pets that, when unsummoned, carried it out of the dungeon. If a low-level player got it, they died almost instantly. Players stayed away from Orgrimmar and Stormwind – the Horde and Alliance capital cities, respectively – out of fear of contracting the disease, meaning they had to find ways to play without immediate access to the banks, inns, or auction houses. This was a major problem for players until Blizzard patched in a disease-killing fix. The incident was even used as an example for real-world research on epidemics. 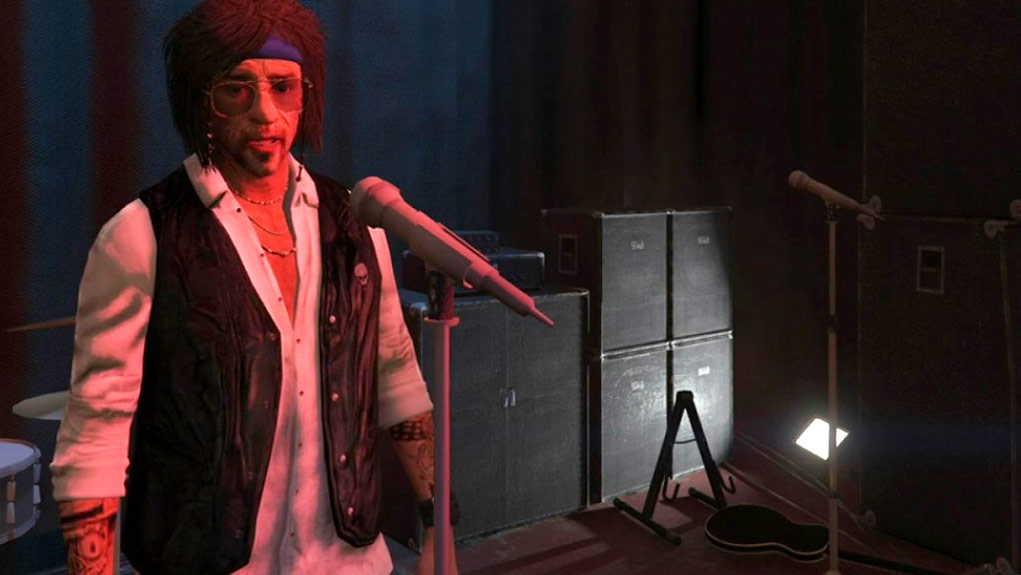 Players take Grand Theft Auto Online role-playing seriously and have turned their in-game personas, whether gangsters or shopkeeps, into streaming careers. On April 10, 2019, a player named MikeTheBard threw one hell of a concert, viewed by thousands of people online, and also by a full house of players in one of the game’s bars. Mike belted out song after song, and even pulled out a guitar to play a solo in Ozzy Osbourne’s “Mama, I’m Coming Home.” This concert became the talk of the game and even attracted the attention of other popular Grand Theft Auto streamers, who stopped everything to watch. Even if they didn’t, they were able to listen to Mike’s performance through an in-game radio station that was broadcasting it.

Mike didn’t break character for most of his performance. He embraced his role of Hubcap Jones, giving him a fully developed history of being an old rockstar. As he belted out songs from Foo Fighters and other bands, the dance floor came to life and even erupted in a violent mosh pit with people banging into one another.

This article originally appeared in Issue 323 of Game Informer.