Cris Velasco has an impressive history in the world of video game music composition. He worked on the original God of War trilogy, Resident Evil 7, and, most fittingly, the first Darksiders. Velasco is returning to the Darksiders franchise for the third entry, and you can hear his work on the game right now by listening to "Fury's Theme" in the video player below.

Velasco also offered the following statement about working on the music of Darksiders III:

Returning to the Darksiders franchise has been a real honor. Working closely with Gunfire Games I’ve really embraced the storyline and the character of Fury, and have written some of my favorite music to date. This game has also given me the opportunity to work with some musicians I’ve admired for a long time. I called my friend Azam Ali (from the band Niyaz) and asked if she’d like to be the musical voice of a badass female lead character. When she said yes, I also had to enlist her bandmate and husband, Loga, to play all the unusual and ethnic stringed instruments. All of this, combined with a 72-piece live orchestra and 60-person choir, are creating the musical backdrop for the third horseman of the apocalypse!

For more on Darksiders III, you can read our exclusive early impressions of the game's upcoming Gamescom demo here. 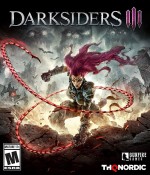