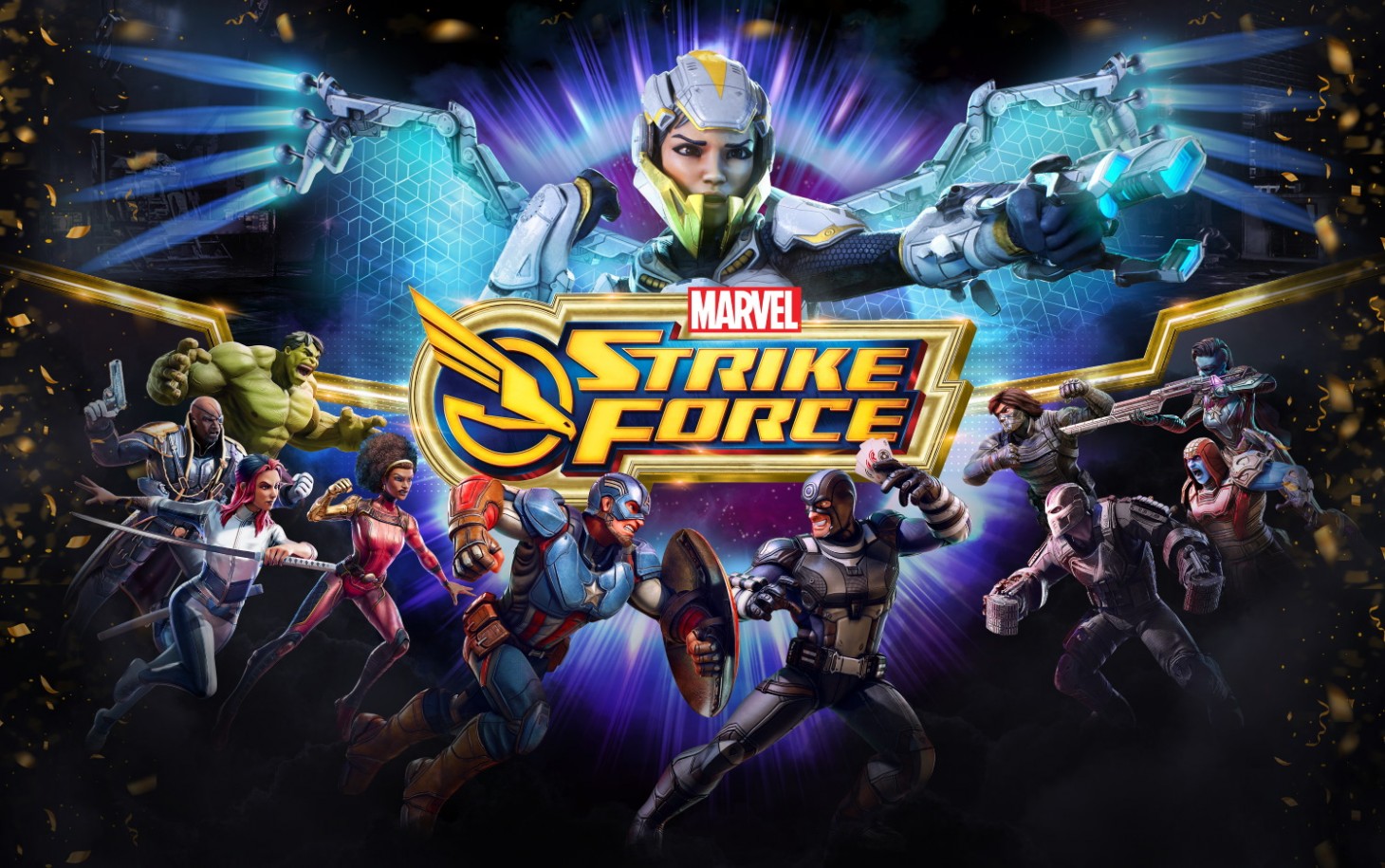 Earlier today, Marvel Strike Force developer Boundless Entertainment gave us a look at its first all-original character created in collaboration with Marvel. With Kestrel joining the Marvel Strike Force roster tomorrow, we sat down with creative director Jason Bender to talk about her backstory, her abilities, her design, and her place in the game.

To this point, Marvel Strike Force has focused solely on existing heroes and villains, delivering Avengers, X-Men, Symbiotes, and plenty more. However, following three successful years of the mobile title, Marvel came to Boundless Entertainment with the offer to collaborate on an all-original hero. "We knew that other games had introduced original characters, so we were always excited about the opportunity to do so," Bender says. "In fact, for Strike Force, we had the opportunity to create an original bad guy. What we decided to do was actually get Ultimus out of the archives and reinvigorate him as an existing character because when we went to create a new villain, everything that I drew out, Ultimus already did, so we used Ultimus. This time, I really wanted to lean into something really original and I didn't want to dig into the back catalog." 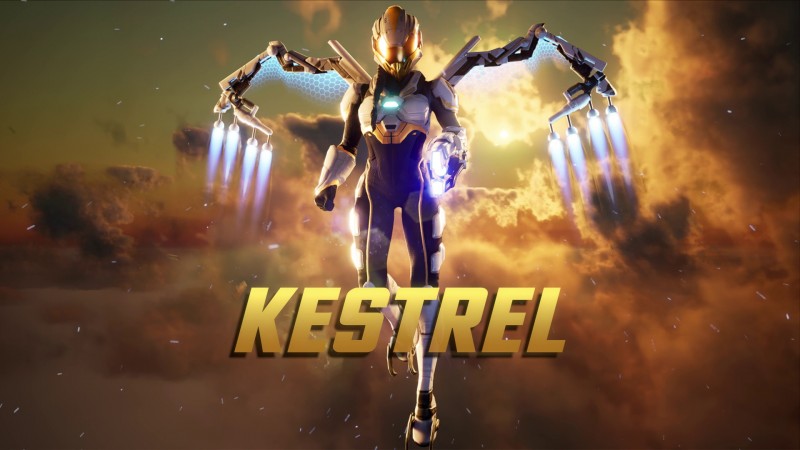 The introduction of a new character into official Marvel lore is something Bender had been dreaming of for much of his life. "I spent my childhood creating Marvel characters," he says. "I played the Marvel role-playing game a lot, and I have stacks and stacks of original characters that I drew up their costumes, I named them, I gave them all these powers ... so the opportunity to add one to the Marvel pantheon is incredibly welcomed and I'm just so excited about it."

Bender has worked with Marvel constantly during the lifespan of Marvel Strike Force, but the process of creating and collaborating on an all new character gave him a new angle with which to view the relationship. "Marvel is just a wonderful partner," he says. "They said, 'You have this opportunity to create. We would welcome it. No limits. Come with whatever you got!' Marvel is always trying to grow and connect with what people are feeling now, in the current moment, and their characters may be timeless, but they're human, so everything they do really connects to us in this moment; you can see that with Falcon and The Winter Soldier that just concluded. One thing we leaned into in creating this character was we wanted to create someone who gave us a chance to represent people who were not represented as well as they could be in our world. This led me to create an optimistic scientist character in Kestrel. She originally hails from Malaysia, and she is, as far as I know, the only Malaysian Marvel character – I'm not entirely sure, but she's definitely the only Malaysian character in our game. It's important for us that players see themselves in the worlds we create. That was something that Marvel encouraged. They want to make sure that people really are able to see themselves represented in the Marvel Universe, and we love that."

As we revealed earlier today, Kestrel's real name is Sybil Tan and she's a physicist, engineer, pilot, and astronaut. During her time at NASA, she earned the callsign "Kestral" and gained a reputation for her brilliance and drive, leading Nick Fury to recruit her to join STRIKE, the division of SHIELD focused on interdimensional emergencies. After becoming the lead architect of STRIKE's interdimensional technology, a failed test of a portal generator sent her floating through several realities and dimensions. She used this experience to better understand how to manipulate and create new timelines, which she brings back to her home timeline in the fight against Ultimus' invasion.

"What we wanted to do was bring STRIKE more to life," Bender says. "Marvel Strike Force is based on STRIKE, so we thought, can we dig more into that? Can we bring it to life more? What kind of person would really represent STRIKE? Kestrel comes from that spirit. What we feel that's about is the spirit of exploration of the unknown, of connecting with what's out there. And then, of course, protecting people from the scary things that are out there."

Her exo-suit, which protected her as she traversed the dimensions, draws from technology of other beloved characters like Iron Man and Blue Marvel, particularly Blue Marvel's exo-space suits from the Ultimates. This combination of technology gave Kestrel the protection she needed to leap through dimensions without fear of harsh environments ripping her to pieces. The suit has wings that allow her to fly wherever she needs to go, while also possessing claws on the feet that let her to grab onto things in case she winds up somewhere in zero gravity. The team also took inspiration from the STRIKE logo itself, which is a variation of the SHIELD logo, but with a swooping eagle, giving her claws, wings, and bird-like helmet design meaning. 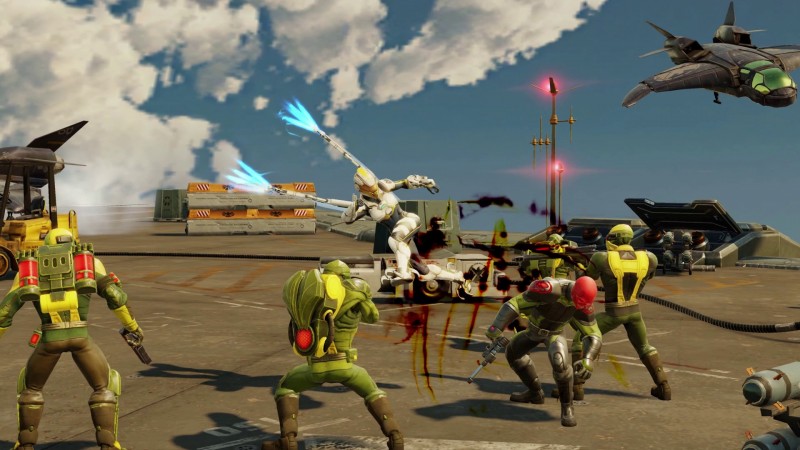 However, the main attraction of her abilities is her portal generator, which allows her to create links between dimensions or can be focused like an energy weapon. The power of the portal generator combines with her understanding of how to manipulate timelines and dimensions stemming from her failed test. This makes her an extremely powerful character capable of creating permanent timelines and understanding how various realities fit together.

She's not only a powerful character in the Marvel lore, though. Marvel Strike Force players won't want to miss out on her, as Bender even compares her to the current consensus best character in the game. "We wanted her to be in the ballpark of Silver Surfer," he says. "So, you're getting some back-to-back heavy hitters in Silver Surfer and Kestrel. They're both going to be pretty crazy."

While Silver Surfer is a universally well-regarded character in the Marvel Strike Force player base, the way he was introduced was less popular. Those who were willing to drop a ton of cash on the powerful Herald of Galactus were able to gather a ton of character shards through the currently concluding first iteration of the STRIKE Pass and other unrelated microtransactions. With Kestrel nearly rivaling Surfer's power according to Bender, the team wanted to make sure the way you acquired her is more friendly to players of all types. 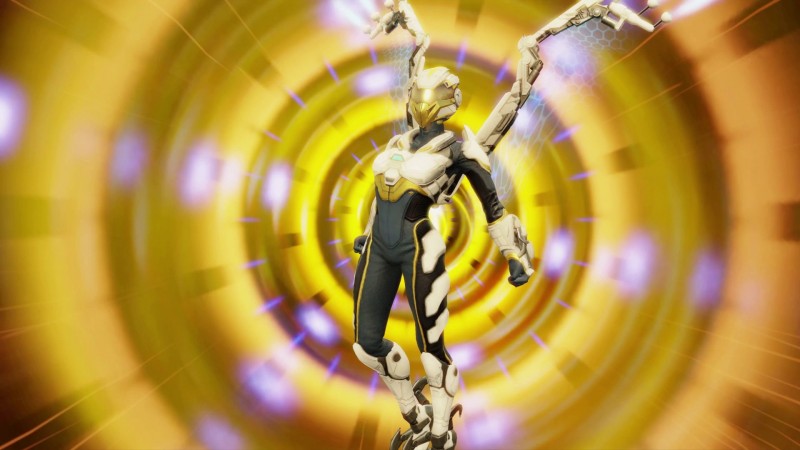 His best recommendation for how to acquire Kestrel during her event, which runs from May 8 to May 23 is to, "engage aggressively with the event campaign." "The event campaign is where the action is," he says. "If you engage with that, you're going to be able to get Kestrel relatively easily. We really wanted to make sure that Kestrel was not exclusive to just a subset of players, so we set her up so that anyone who really wants her can get her. The more you engage, of course, the stronger she'll be."

While Bender doesn't want to speak to any additional ways that she'll be made available or fountainable just yet, he says that the event campaign serves as the backbone of her launch and the way to acquire her right now. As with all new characters to Marvel Strike Force, it's all but a certainty that you can expect some microtransaction offers if you want to give her an added boost.

Boundless hopes it has created a powerful, versatile kit that can be plugged into any team and immediately help out. "We didn't want to introduce Kestrel to the game and then have her really limited to a specific subset of game modes," Bender says. "That led us to create her more like how we created Captain Marvel. Captain Marvel is a character that is useful virtually everywhere. Depending on where you are in the meta, you can plug Captain Marvel into almost any team; she's really powerful. Kestrel comes from that tradition of versatility. She does have, due to her background, some synergies with, for example, Nick Fury. We want Kestrel to be able to help provide firepower on any team where you need some more." 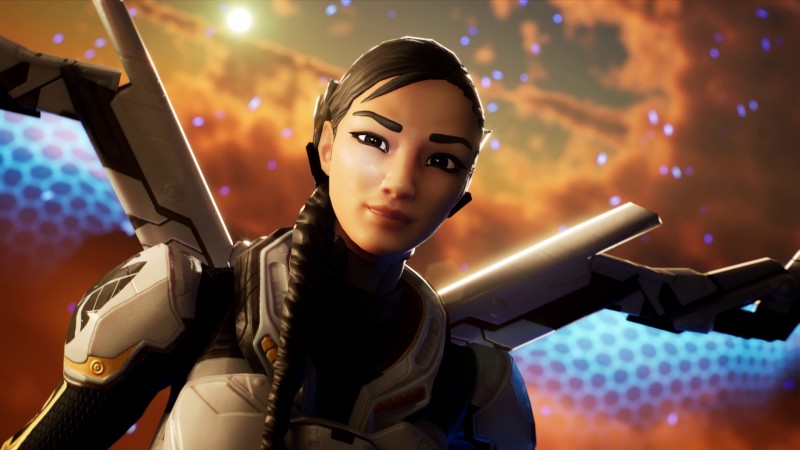 Despite her power, she does not have any mode-specific boosts, which gives players more options on how to use her. "She's especially good in modes where versatility is important, like arena-style modes; that's a place where she's able to augment non-meta teams," Bender says. "A lot of times in the game, you're unable to create the perfect team of five characters that you know are going to work together for one reason or another. You need some heavy hitters to fill in those gaps, and she's perfect for that."

If you're anything like me, the first thing you thought of when you saw Kestrel was Overwatch. In addition to the obvious comparison of the wings with Mercy, you can draw comparisons to Pharah's suit and even Tracer's silhouette. When I ask Bender if any inspiration was pulled from Blizzard's popular hero shooter, he gives me a bit of a surprise answer. "There kind of had to be, right?" he says with a chuckle. "Inspiration comes from all over and I played a lot of Overwatch since launch; I had the pleasure of, because I was at Blizzard at the time, playing it even pre-launch, so I know that stuff seeped into my brain, but this was also a team effort, so other people on the team also contributed."

However, Kestrel's design draws from far more than just Overwatch. "I think we drew inspiration from a lot of different places," Bender says. "I really like the freedom that comes from the Falcon and Tony Stark kind of world of the Marvel Universe where it makes you feel like you can go anywhere and do anything. Another thing that inspired me a lot was just space – space travel, both in science fiction and reality. We're in a great moment of space exploration and rocket development; we're finally going back to Mars, so I really wanted to honor the tradition of astronauts and how they have to always push their technology. [...] And also, we're in a great moment of sci-fi with things like Star Trek: Discovery and The Expanse where we're getting new glimpses of what science fiction can look like. I want Kestrel to be in that tradition."

While Kestrel only exists in Marvel Strike Force for now, Bender hopes that will change in the future. "We do hope to see Kestrel spread her wings so to speak and fly off into the Marvel Universe," he says. "I'd love to see her in comics and future games. That's my great hope for this character. As someone who was a child creating these characters and now has the opportunity to bring her to life in a game, I want to see her in the future in other parts of the Marvel Universe."

Kestrel joins the Marvel Strike Force roster tomorrow as part of its new title update, with her event running through the middle May. 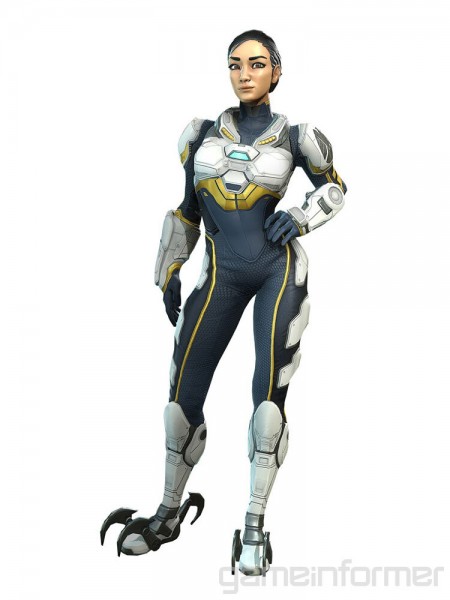 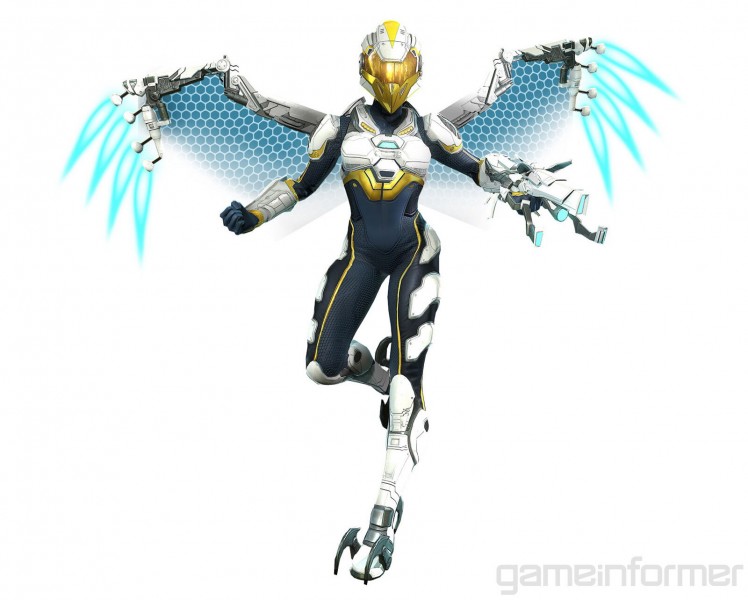 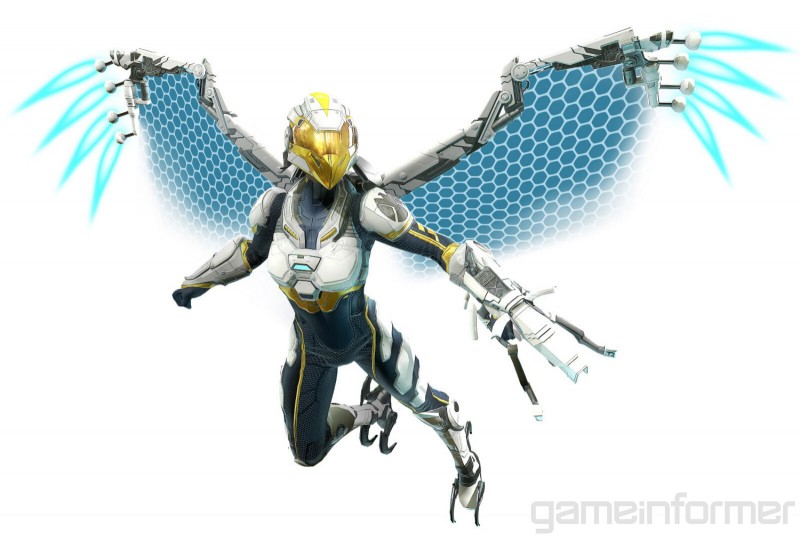