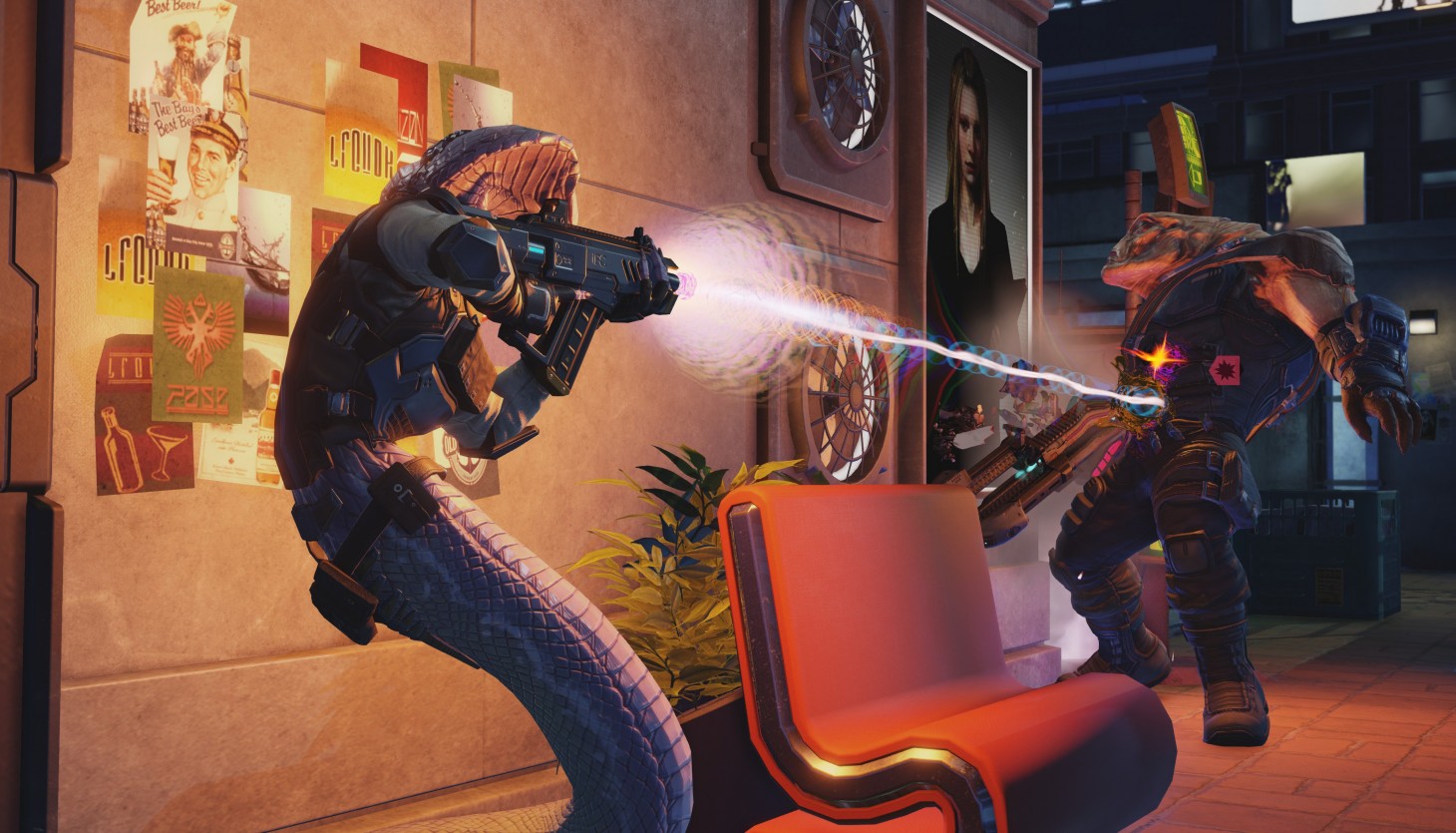 Firaxis On How Chimera Squad Ties Into The Larger XCOM Universe

Last week, Firaxis surprised us with the announcement of a new standalone XCOM game. You won’t have to wait long to play this unique spinoff, but since the game is a bit of a departure for the series, we chatted with lead designer Mark Nauta about the origins of the project and how XCOM: Chimera Squad is canonically tied to the rest of the franchise.

What were some of the elements and challenges you got excited to tackle with Chimera Squad?

Nauta: After releasing XCOM 2 and the War of the Chosen expansion, we felt there were still gameplay possibilities that had yet to be discovered or explored within XCOM, and tackling them together allowed us to explore some of the fundamentals of XCOM without having to rebalance the entire game and its expansions.

The biggest change in combat is the introduction of interleaved turns. In previous XCOM games, the player moved and took actions with all his units and then the enemy turn moved and acted with all its units. Now the players’ units and enemy units all act within the same timeline, which means you have whole new decisions to make in combat. For example: can you ignore minor enemies to focus on a major threat that’s acting later in a turn? What if you’ve got a grenade that’s going to go off before a character in the blast can act? Do you have another character who can move him to safety? Adding Encounters made the combat a lot tighter, too, and Breach Mode also explicitly feeds into the tactics you use in each Encounter.

Adding agents who are set characters was also a big shift for XCOM. While we did have playable characters previously in War of the Chosen, a fully characterized roster is a big shift for the series, and we’ll be interested to see what our players think of the change.

How did you decide to put more focus on story and world-building and how did you settle on the City 31 direction?

Nauta: XCOM: Chimera Squad takes place five years after the events of XCOM 2, where players successfully overthrew the Elders’ control of Earth. Keep in mind that the aliens that invaded Earth were dominated by the Elders as well, and now they’re stuck on an unfamiliar world and have to figure out how they’re going to live on their new home, free from mind control. We wanted to explore what this meant for humans, aliens and hybrids who fought or were victims of the war; how would they interact, feel or think now that everything was over? To explore this story, it made sense to introduce specific characters – the agents of Chimera Squad – who exemplify parts of the conflict, as well as set the stage in City 31. City 31 represents a potential path forward for humans and aliens to coexist, but it’s a fragile peace that is challenged by underground threats driving the city toward chaos.

Is this game canonical with the rest of the XCOM series going forward?

Nauta: Yes, though as a standalone title it tells a specific story within the broader XCOM universe.

The change from expendable units to instant failure on death feels like a big change for the series. How did you settle on this change?

Nauta: In previous XCOM games, Permadeath made both narrative and gameplay sense as you were engaged in a war of attrition – soldiers are recruited from many different nations, and losses were to be expected. It was also a major part of the consequences of that game, in that losing a veteran soldier could leave you without skills and abilities you had come to rely on for successful missions.

In XCOM: Chimera Squad, you’re now working with a specific set of characters in agents and we felt permadeath ran counter to the experience of playing with these characters. And, practically speaking, there were a lot of players who didn’t want to lose their XCOM soldiers and would reload if missions went bad. So, for the sake of Chimera Squad, we came up with a compromise – you lose a mission if one of your agents bleeds out on the battlefield. Any character can stabilize someone who’s down, and there are consequences for having an agent get seriously wounded. But losing an agent means you have to restart the mission.

That said, there are still consequences for failure. It is possible to lose the game at the strategic level. We also understand that permadeath presents a fun challenge that franchise veterans and fans have enjoyed, and so we’ve added a hardcore mode to retain that same tension.

How replayable is Chimera Squad? I like the heroes I’ve chosen so far, but curious about the ones I haven’t seen yet.

Nauta: During the first playthrough, each player will start with the same agents – Godmother, Terminal, Cherub, and Verge. As a player progresses, they’ll unlock additional agents to choose from and the last agents become unlocked only after beating the game. In subsequent playthroughs, you’ll be able to select your starting squad members from any of the previously unlocked agents.

In addition to gameplay changes brought up by mixing and matching agents, you’ll also have more opportunities to hear combat chatter and see how agents interact with each other. XCOM: Chimera Squad’s campaign is broken into three parts which can be tackled in any order. Experiencing each of these parts at different times in a campaign will change the challenge offered to players.

The interwoven turns feel like another big departure for the franchise. How did you refine that system?

Nauta: Having interleaved turns changes both the types of decisions you must make and what kind of tactical options you have at the table. Right now, it feels like you’re making more of a response to events as they unfold. You can have a plan for your four characters, but if an enemy action happens between characters two and three, you’re suddenly thinking: “Well, shoot. I didn’t expect that to happen. Do I need to change something up?” Suppose you’ve got a character like Blueblood moving in for a flanking shot, and an enemy throws a grenade at them. You look at the timeline and Blueblood won’t be able to act again until after the grenade goes off. Do you have Torque on your squad? Can she tongue-pull him to safety? Do you still have your Team Up action left this mission? Or do you risk having Blueblood eat the grenade and use the rest of the squad to set Blueblood up for an optimal attack?

I love the new Breach Mode. How did you refine that system?

Nauta: I’m glad to hear that! The purpose of the Breach phase is to give players a selection of breach points that have various strategic advantages and disadvantages. Every decision made – which agents you have with you, their abilities, what order you send them in, which breach points you select – has an impact and executing a successful Breach is both a cinematic and awesome strategic moment, and that carries into the rest of the Encounter as well. It’s an evolution of the concealment and ambush from XCOM 2. The challenge was making sure we struck the right balance between risk, reward, and player agency – we didn’t want Breach to be too easy or too hard.

The announcement was a surprise. Why did you decide to keep this project a secret until a week before launch?

Nauta: We know players are looking to dive back into the world of XCOM and are excited to launch on April 24. As a standalone title, XCOM: Chimera Squad is neither sequel nor expansion and is priced appropriately. The short time to release and the price make it easy for veteran fans to check out XCOM: Chimera Squad without having to wait too long and give new fans an interesting new way to get introduced to the XCOM series.

Stay posted for our full review of XCOM: Chimera Squad tomorrow, but while you wait, read our review of Firaxis’ last entry in the series, XCOM 2: War of the Chosen. 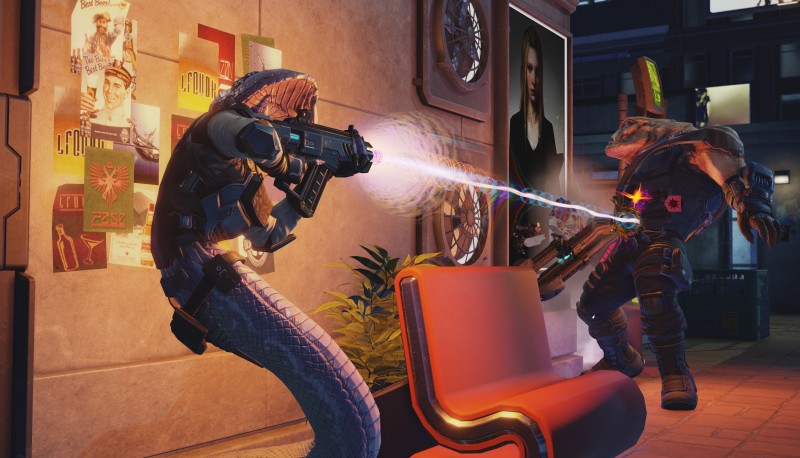 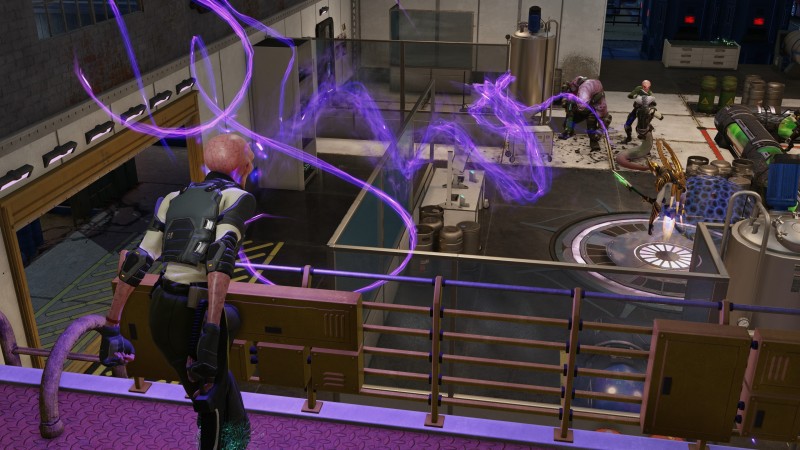 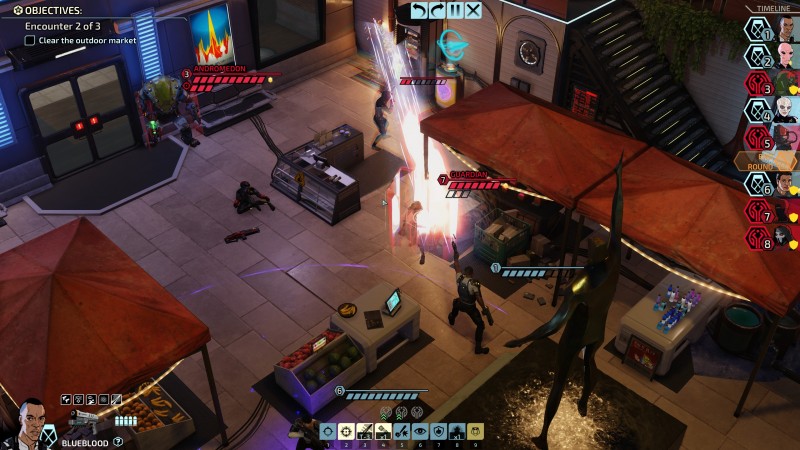 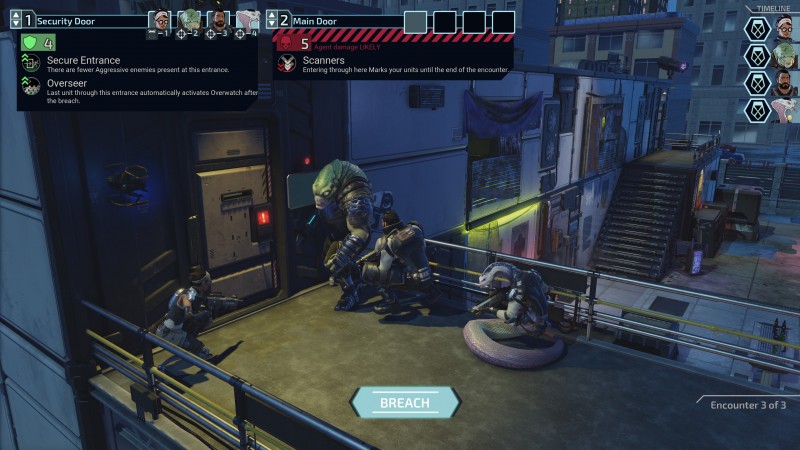 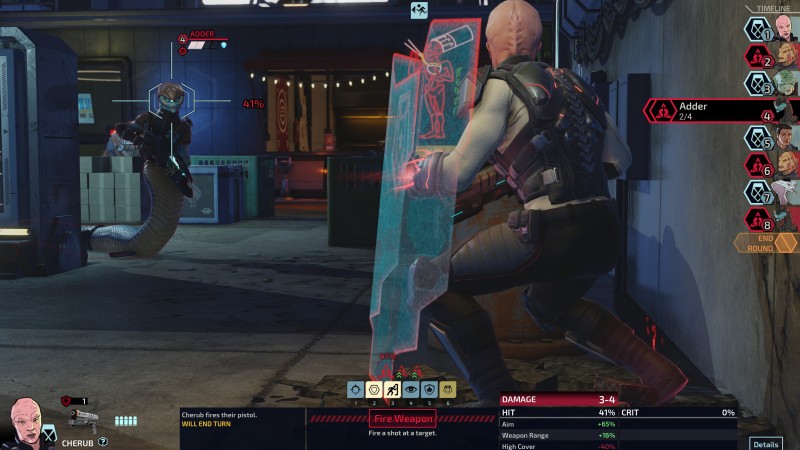 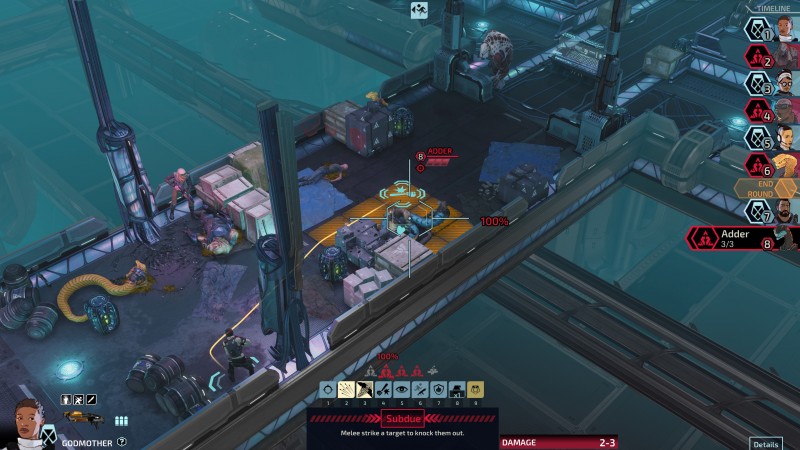 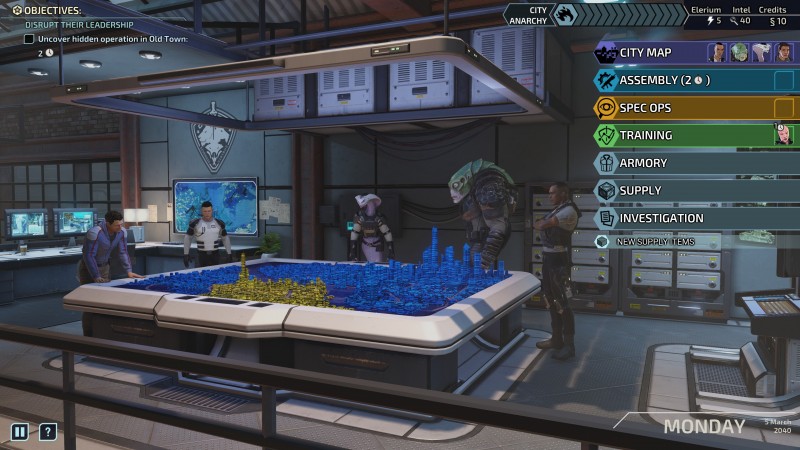 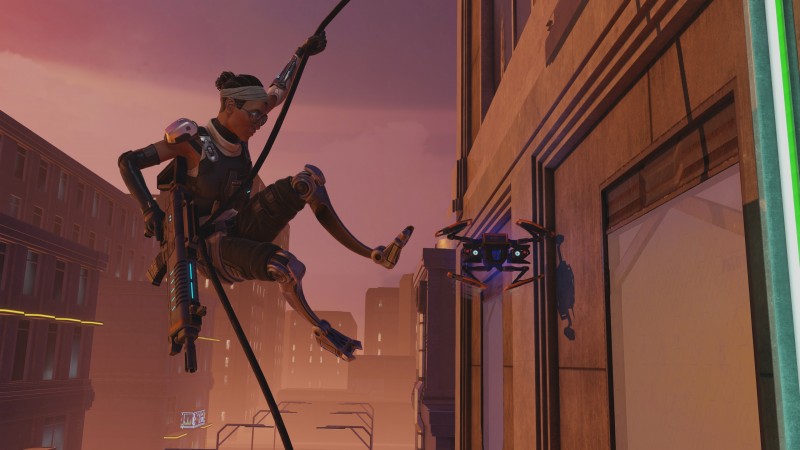 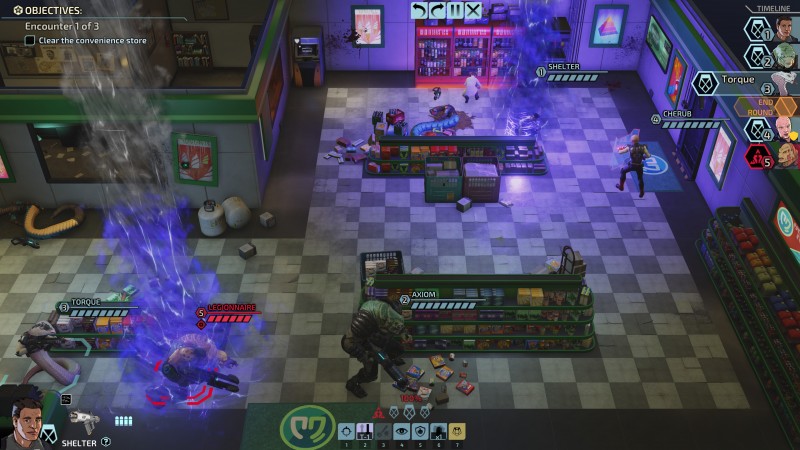 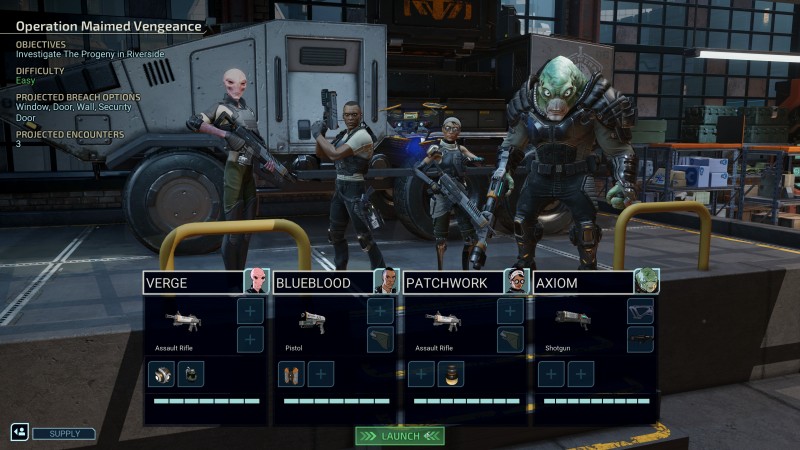 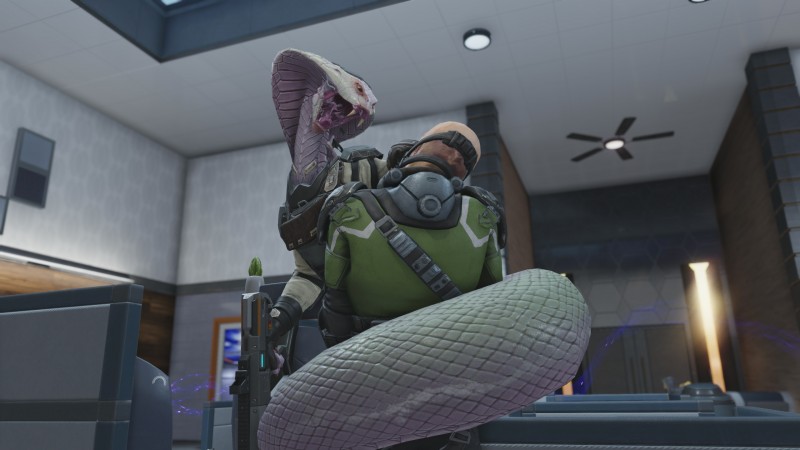 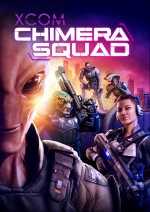