Ubisoft revealed several new games during its E3 press conference last night, including a sports game called Roller Champions. Imagine if roller derby, basketball, and football went through a teleporter and emerged on the other side as some weird kind of hybrid sports-creature thing. Got it? Great! That's Roller Champions!

Our own champ, Jeff Marchiafava, laced up his skates and played a couple of matches for our viewing amusement. He may not have won both games, but he did his best. Unfortunately, his best doesn't put seats in the bleachers so we're done with him. Hit the showers, loser!

You can play the pre-alpha of the game now on PC through June 14 at no cost via uPlay, with the full game arriving sometime next year. 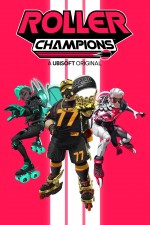