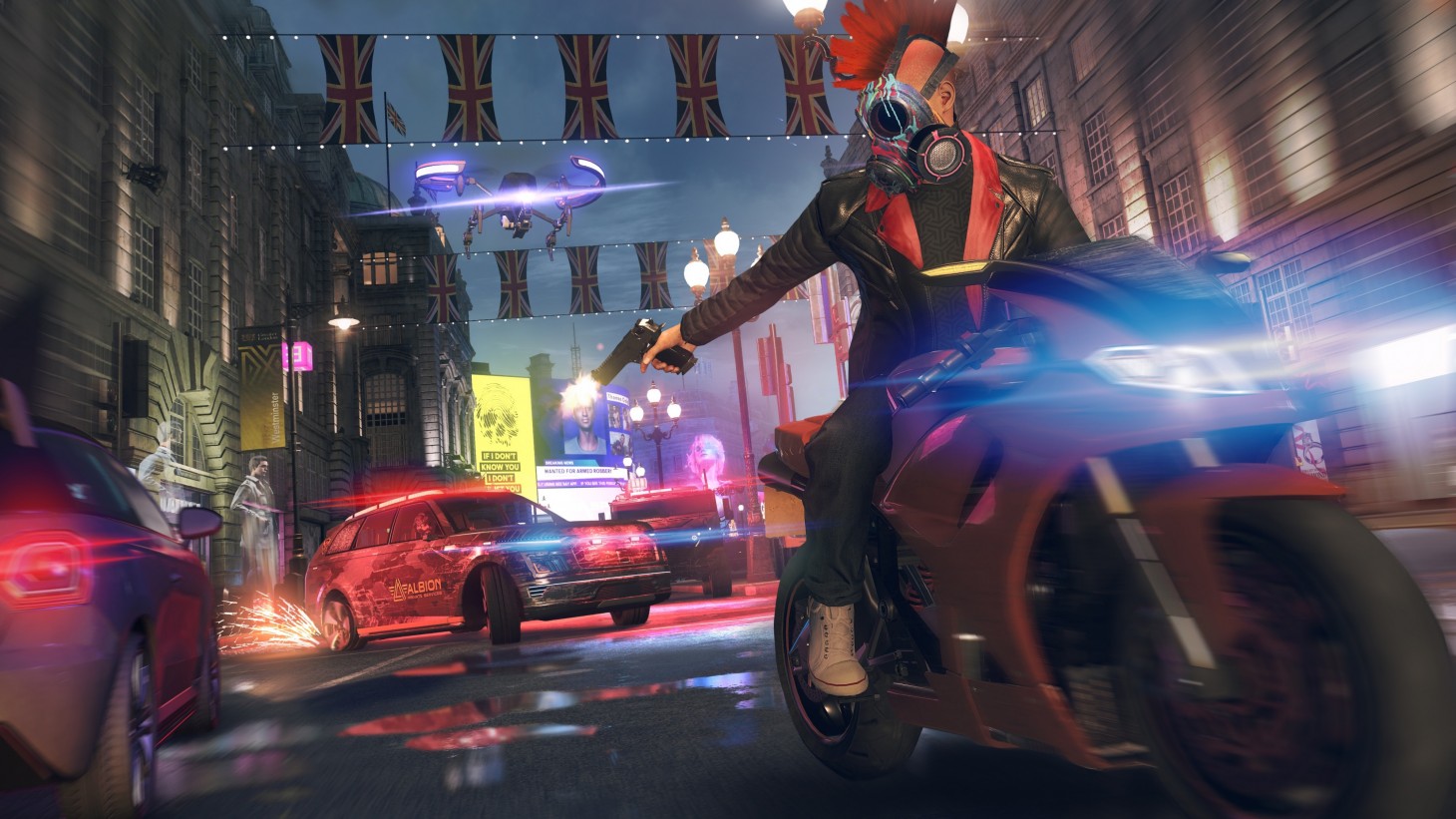 In Watch Dogs Legion, Britain is on the brink of collapse. This post-Brexit world sees a private military corporation reign and privacy has become near non-existent. It's up to you to gather your DedSec hacker resistance to fight back against corruption and take back London.

I played a solid 45 minutes of Watch Dogs Legion at E3, and came away feeling impressed with the recruitment system and the ability to play as any character in the world.

My demo begins in a pub, where I stumble around with hazy vision after a couple of drinks. My first objective is to scope out a potential recruit by profiling bar customers, to find the perfect addition for my DedSec team.

In Watch Dogs Legion, everything in the profiler (the info box that pops up when you hack a person) actually exists in the world. Ubisoft says that every character has its own relationships and friends, as well as a job they actually frequent and different personalities. So what does this mean for the overarching story? According to Ubisoft, there are five different main storylines and over 60 missions. Trying to build a comprehensive story with no single main character was a challenge, creative director Clint Hocking told me, but was possible once they figured out the technology.

"We got a lot of really talented people in animation, in voice, audio, and in performance capture, and just just breaking down the problem and figuring out how to solve it," Hocking says. "We spent a long, long time working on that technology. And now it's here." 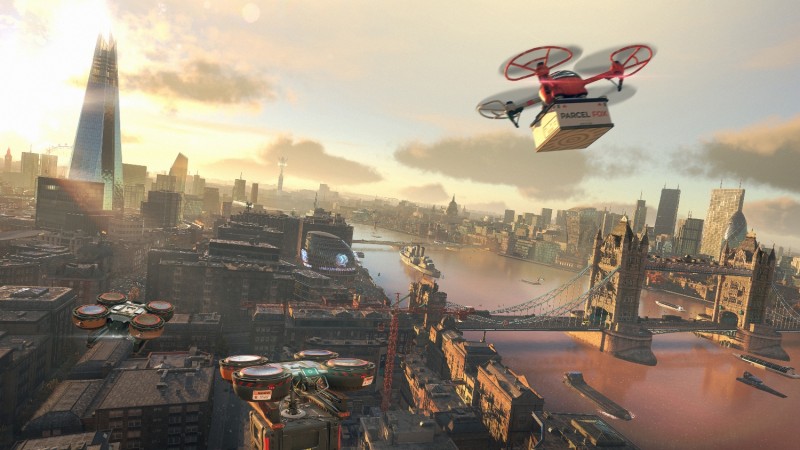 As I walked around the bar, I could add different people to my "contacts," which basically means I save their information in a menu screen so that I can later decide if I want to recruit them to DedSec. I decided on recruiting a young girl named Gabrielle, though to gain her support, I would have to first lend her a hand. She tells me that she needs her criminal record erased at the local Scotland Yard police station, so I hijack a car and head there immediately.

There are many ways to get around London. You can drive vehicles and motorcycles, fast travel thanks to Underground markers, or even switch to another character that you've already recruited. In Watch Dogs Legion, your recruits are fully playable, and have their own schedules, meaning they could be at different locations and doing different things depending on the time. Driving feels pretty much exactly as it did in Watch Dogs 2, which isn't a bad thing.

Two differences I noticed are that there are now self-driving cars that guide you to your destination automatically, as well as ID checkpoints. The latter are checkpoints on the roads that glow blue. If you're wanted, however, going through these areas will make them glow red and alert the police of your location. It's an interesting twist to police pursuit, and while I didn't get to see it play out in the demo, I'm curious to see how it'll fare in the final product.

Once I got to the police station, it was clear I had a challenge ahead of me. As a restricted zone, I couldn't just waltz in and tweak their database to my liking. Instead, I would either have to fight or sneak my way through. An interesting element in Watch Dogs Legion is that most enemies won't engage in gunfight unless you pull out a gun first.

"In London, the police don't carry firearms," creative director Clint Hocking says. "[In Watch Dogs Legion], the police are painted as sympathetic characters. They're loosely but reluctantly affiliated with Albion, who are the security forces. [Police have] had their power stripped away."

To infiltrate the police station, I hacked into cameras (the same way you do in past Watch Dogs games), as well as used my spider bot to look around in the restricted zone undetected. The spider bot is similar to the RC car in Watch Dogs 2 which was used to scope out areas, climb through small vents, and hack things. The spider bot can do similar tasks, as well as take down opponents lethally without your character being put in danger. Each character you recruit has different stats and can be of three different classes: Hacker, Infiltrator, and Enforcer. As a hacker, it meant I could build spider bots quicker on the fly if one was shot down by a guard.

A lot of the hacking elements from Watch Dogs 2 return, like distracting someone by buzzing their phone, but certain new perks and abilities change things up enough to feel fresh. For example, an AR cloak can rend you invisible for a few seconds at a time and you can now ride atop large, pilotable drones once they're hacked.

The light RPG mechanics, where you can level up to gain new hacking abilities, are still present here, but it's a little different considering you have several playable characters.

"There's individual progression," Hocking says. "So every character levels up, and as they level up, they get perks and new abilities to strengthen your playstyle for that character. But then DedSec also has a bunch of upgrades like the ability to hack into new kinds of drones and certain upgrades that you can get for spider bots or for buying new weapons. These are team upgrades that apply to every everyone in your team."

The biggest changes to combat are that half the weapons are non-lethal now, and that your characters can experience permadeath if you aren't careful as I later see firsthand in my demo. I saw some intense combat and gunplay during my gameplay session after the Canadian embassy was bombed in Trafalgar Square. A slew of militant guards came at me and, because they see me as a terrorist, they came in guns blazing. It's an overwhelming battle and my character loses health rapidly.

When near death, two options appear: I can either surrender to the armed forces or keep fighting. By surrendering, my playable character is taken to either a jail or a hospital, and by continuing to fight, I need to be extra careful because my character could permanently die if I take the slightest bit of damage. Furthermore, if I wanted to, I could take control of another DedSec agent to rescue (or neutralize) the captured or injured character from jail or prioritize their medical treatment. One particularly humorous thing I got to try was hacking into a medical center and tweaked the database so that someone I punched in the face would get out quickly. I couldn't help but laugh; I put them there in the first place, after all.

I lost two playable characters to permadeath, which I felt a tinge of sadness about since I had already begun to get attached to their personalities, but I loved that it brought a dynamic and ever-changing feel to the gameplay. I'm looking forward to seeing more when we get to play the final product in March.

For more on Watch Dogs Legion, watch the reveal trailer here as well as our list about four reasons this could be the Watch Dogs we've been waiting for.