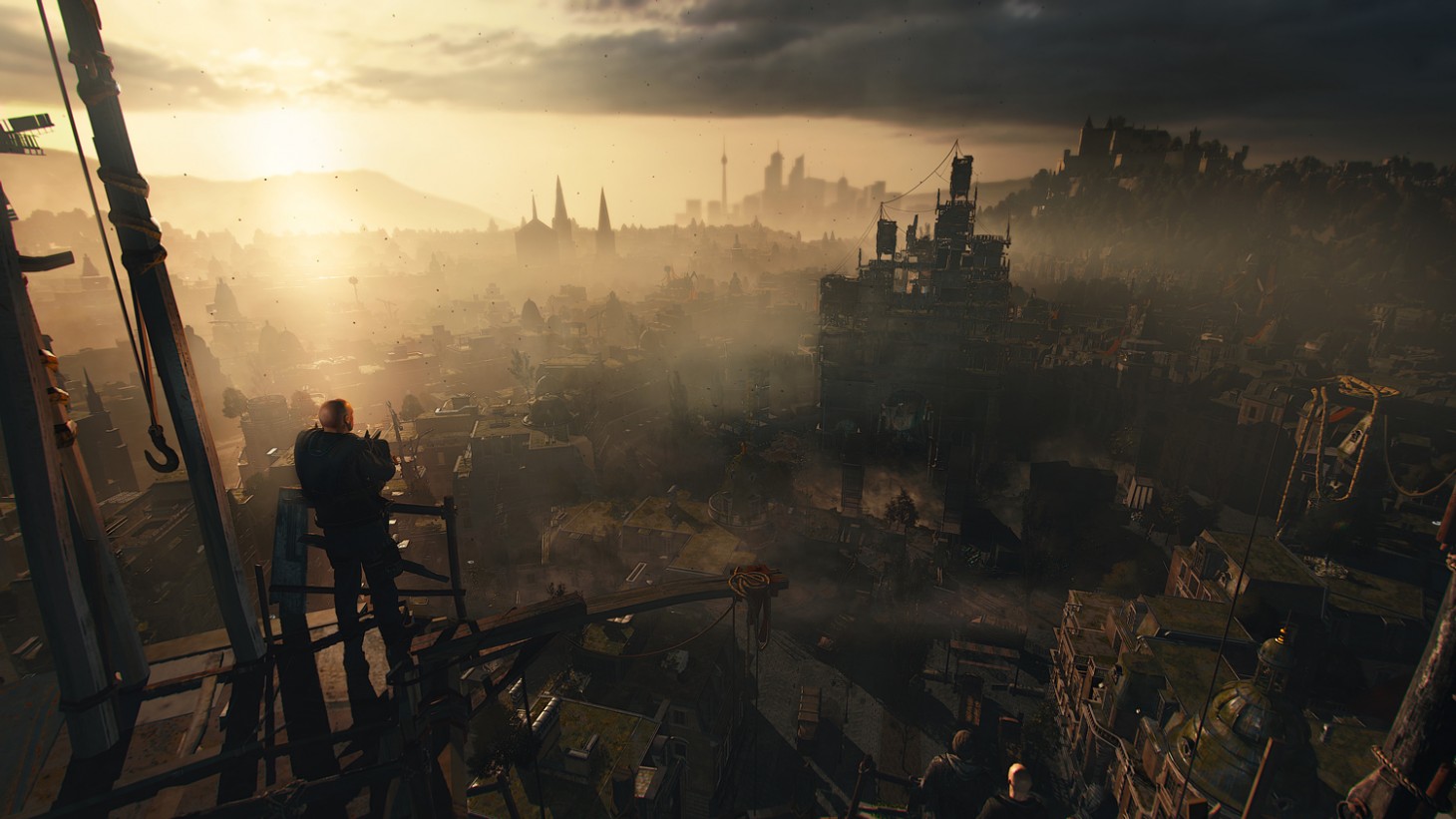 Despite the overabundance of zombie games on the market, the original Dying Light stood out from the undead horde thanks to its first-person parkour mechanics, gritty melee combat, and dynamic day/night cycle (you really didn’t want to get caught outside after the sun went down). For the sequel, Techland is not only improving upon these pillars, but also introducing a wealth of narrative choices that will shape the very city you find yourself in. Here are five big takeaways from our hands-off demo.

The ability to climb, jump, and slide your way through the city of Harran gave players a fighting chance in the original Dying Light, and Techland is literally doubling down on mobility for the sequel – players have twice the number of parkour abilities at their disposal compared to the first game. During our demo, we saw the player slide under railings, hop across the tops of lamp posts, swing around corners on a rope, and slide down a banner Errol Flynn-style by slicing through it with a knife.

Dying Light 2 also introduces parkour attacks and parkour puzzles. Parkour attacks allow players to take down enemies while navigating the environment – examples during our demo included kicking a bandit while vaulting over a waist-high gate, and knocking another enemy off of a building while swinging from an overhead bar.

Parkour puzzles, on the other hand, take a bit more planning. Players will encounter certain areas that require them to string together a combination of moves before their stamina bar depletes. In our demo, the player was tasked with navigating the inside of a water tank; each successive leap and climbing action took off another chunk of his stamina bar, until he reached a platform he could stand and rest on. Other sections were more timing-focused, requiring him to combo wall-runs into jumps and monkey-bar swings to reach the top.

The fluidity and variety of Dying Light 2’s traversal reminded me less of the first game and more of Mirror’s Edge – albeit with more zombies.

Dying Light 2 takes place 15 years after the infection, in the last city humanity has left. As such, humans are as big of a threat as the undead – most of the enemies the player encountered during our demo were club-wielding bandits.

All in all, the melee combat seemed even more complex and deliberate than the previous game, with enemies changing stances during encounters, requiring the player to block, dodge, and time their attacks when they see an opening. You can also use environmental objects to your advantage – the player in our demo finished off one particularly adept enemy by picking up a bucket and hurling it at his head, before giving him the aforementioned parkour swing-kick down to the pavement below. Taking on even just two bandits at a time seemed challenging, so if you get on the wrong side of an entire gang of enemies, you may want to put your parkour moves to good use.

While our demo mostly focused on human enemies, the undead are also getting an overhaul. Techland says that in the original Dying Light, nighttime was scary, but not complex. As such, the developer is revamping the infected to feature both independent and group A.I., which will result in more complex behavior from our undead counterparts. Players can expect to run into bigger hordes of slow-moving zombies on the streets during the night, as well as faster and more agile zombies on the rooftops.

During the day, the infected will congregate in nests inside darkened buildings. We got a peek at one of these nests during our demo, when the player ducked into an old, abandoned department store. Over a dozen enemies stood eerily among a collection of mannequins, grunting and sniffing as the player tried (in vain) to sneak around them. While stealth is an option, Techland says that most of these nests will contain valuable loot if you clear them out – and manage to stay alive during the process.

Dying Light 2’s biggest change is how you affect the city itself. Each choice you make during missions will shift the balance of control between the game's various factions, which in turn affects the state of the city (scroll between the above images for a visual example of how the city might change).

In the demo we watched, the player had the choice to relinquish control of the water tower he scaled to either an organized force called the Peacekeepers, or a pair of less-than-reputable entrepreneurs. If you side with the Peacekeepers (and then wait a few in-game weeks), the city transforms into a cleaner and more secure environment. Squads of Peacekeepers will attack any zombies they find shambling in the streets during the day, and help clear out zombie nests. New shortcuts such as ziplines and pulleys also become available, and the water tower you handed over to the Peacekeepers provides fresh water to the entire population via fountains throughout the city. However, there are downsides to aiding the Peacekeepers as well – the faction isn’t particularly big on democracy, and holds public executions to discourage or dispatch of anyone who breaks their rules.

If you side with the water-stealing bandits, on the other hand, the citizens remain free to do as they please – but they also don’t have the added security that the Peacekeepers provide. The city looks more rundown and dangerous in this scenario, and you’ll run into destitute survivors begging for water, as the criminals you handed the tower over to charge a premium price for a drink. On the bright (and somewhat cynical) side, however, your “business partners” will supply you with a share of the revenue from their endeavor. How do you live with yourself?!

Techland is taking these player-driven choices seriously; the developer has hired on famed game designer Chris Avellone as the Dying Light 2’s narrative designer, and hired members of The Witcher 3’s writing staff to help craft compelling choices. The decisions you make will also open up entirely different areas in the city. For instance, if you sided with the bandits, a massive black market called La Puerta will open in the city, with new NPCs that you can interact with, adding another layer of replayability to the game.

The Game Is BIG

Techland is no stranger to creating big games; not only did the original Dying Light take place over two sprawling open-world maps, The Following DLC introduced a third map that was twice as large as the two previous locations combined. Dying Light 2 ups the ante yet again – Techland says the new city you’ll be exploring is four times the size of all the previous maps put together. While bigger doesn’t inherently mean better, our demo already showed the player having way more interaction and influence over the environment than the previous game. Add to that the increased parkour abilities, deeper combat, and the return of four-player co-op, and Dying Light 2 may just keep fans busy until the actual zombie apocalypse.