Nintendo On Why Ultimate Is A New Smash Bros. And Not A Port

This morning, Nintendo fully revealed Super Smash Bros. Ultimate. and while the Direct offered a huge amount of details about the game, we still had a lot more questions. To get as many of these answered as we could, we spoke with senior product marketing manager for Nintendo America Bill Trinen and localization manager Nate Bihldorff about the game.

You’re calling this a new Smash. What makes it more than a port?

Trinen: My first answer is – has there ever been a port of a Smash Bros. game?

Trinen: They were developed in tandem.

Trinen: Yeah. Every Smash Bros. game is a new game. I think for me personally what really defines it as a new game is just the core change to the core mechanics. When you change the speed like that, that cascades through character motion, through the speed at which the various moves are coming out, the animations and whatnot, and you have to rebalance every character in the game, so then as a player, when you come in to start playing the game, you’re having to re-learn every character in the game. Essentially when those core mechanics are new, then the game becomes new. Then, as you saw, in addition to changing the core mechanics you’ve got characters that have new models, characters that have new moves or dramatically changed moves. Changes to even the final smashes and the speed in which those happen to match the tempo of the game and things like that. To me, overall, once you’ve changed that core mechanic, you really are looking at a new game.

You said 60+ fighters earlier. Do you have the actual number of how many there will be at launch?

How is long-time Smash director Masahiro Sakurai’s health? In the past we’ve heard that he had issues with his wrists during development.

Trinen: He’s totally fine. I think he had wrist issues during the development of the Wii U game. He’s fine now. My understanding is he got over it, did some rehabilitation on it, and is in good shape.

Is this a compressed Smash Bros. development cycle? Are these guys getting pushed really hard to get this thing out in December?

Trinen: No [laughs]. Well, not any harder than Mr. Sakurai always pushes himself. He throws himself into his projects. I guess it depends on how you look at it because the Wii U game launched in 2014 and this is 2018, so four year cycle.

Trinen: I always look at the jump from N64 to Melee as really sort of being the biggest jump in Smash Bros. and that was actually the shortest gap between two games.

Bihldorff: And remember, between Brawl and Wii U, he had a little game called Kid Icarus: Uprising, which was fairly large to develop.

Was Sakurai eager to jump right back into Smash Bros.? Because it seems like every time a new one comes out he’s like, “This is the last one!”

Bihldorff: [Laughs] I think he sort of approaches every Smash Bros. game that way, which is just like – it’s not a literal thing, but he’s approaching it as if it’s the end. He wants to put absolutely everything into it and he doesn’t want to leave anything on the table. As opposed to reserving things for the sequel. So he approaches it as if it is the last.

As to whether he was super excited to dive back in? I think that would be a question for Mr. Sakurai.

And he is not here at this E3, right? He’s off working on Smash?

Bihldorff: I’m sure he’s somewhere working on Smash. If he’s not working on it physically, he’s thinking about it.

On the Saffron City stage – the Pokémon stage from the 64 game – I noticed that when the Pokémon pop out, they are the original pixelated sprites. Will we see anything else like that in the game?

Bihldorff: Certainly on any N64 stages you’re going to get that instant flash of nostalgia. It’s a really nice mix when you look at the stages. There are stages that have more significant graphical upgrades, like the Kongo Jungle. The falls in the background look really great. But then you also have N64 stages, like Saffron City, that really preserve in crisp detail, the aesthetic of the original N64 game. You’re going to see a really good mix of that throughout.

Trinen: At the same time, if you were to do a side-by-side comparison of the N64 Saffron City with the Saffron City in this game, you will notice some subtle differences they’ve done in terms of the platforms and spacing relative to each other, the tops of those towers, so it’s actually more than just a straight, we’re bringing their stage over and up-res’ing it. He goes in and meticulously looks at everything and says what’s right… 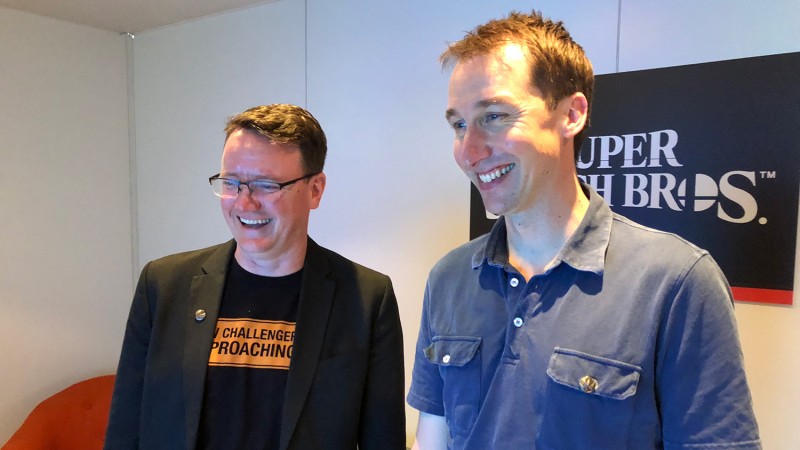 You have always been able to pause and look at characters and rotate the camera around them. Is that feature going to be expanded at all to take advantage of the Switch’s screensot and video recording capabilities?

Bihldorff: We will have to wait and see. It’s not a feature that’s included here at E3.

Trinen: This particular build you can’t even pause. It’s an event version that it optimized for quick turns to let as many people play as possible.

Bihldorff: We really are just looking at the tip of the iceberg with this game. There is really going to be a ton to announce down the line. Specifics of how the pause works and the swivel of the camera and all that. You can look forward to all that in the future.

Bihldorff: We play a lot of stock as well. I just like it because it comes down to one versus one in the end.

I also want to know the score the whole match, where with timed, I’m never really sure.

Bihldorff: This is actually helping you with timed matches in a few ways. Not only, every time there is a K.O., especially in a one on one match, are you seeing the score bracket up on the screen and getting an update, but I think you saw in the direct, the person who is in the lead will sparkle.

Is it a consistent sparkle?

Bihldorff: Yeah, you’re not glowing or anything like that, but there is a visual indication. This game has a lot more information on screen if you know where to look. You see a lot of that stuff, like the Limit Gage and seeing what The Villager has in its pocket.

Trinen: The icon is so perfectly cute.

Can you tell me about the square in the corner that shows up periodically representing where players are?

Trinen: There’s a box and then there is a smaller box inside of it. The smaller box represents the viewable area of the stage. The larger box represents where the floor ceiling and walls are. It’s the K.O. wall. What that box does is, once you’ve gone out of the viewable area of the stage, the dots give both the player who has gone out of the playable area, as well as the player who knocked them out, an indication of where the character is outside the viewable area so both of them can strategize around either how to get back to stage, or stopping them from getting back.

The percentage goes to the tenth decimal point now. What is the point of that?

Bihldorff: Core players will, I think, embrace that because I guarantee you within a week there will be a guide out there saying, “Here’s the exact percentage Mario’s forward smash does.” It’s obviously pretty meaningless to a casual player because they just want to know, “If I get hit hard, am I going out of bounds?” For those that care, it will be pretty valuable.

Can you do multiplayer locally with two Switches? Like one versus one where each player gets their own screen?

[Editor’s note: Thought Bill Trinen and Nate Bihldorff did not have an answer at the time, Nintendo did follow up with more details saying that while local wireless play will be available, Nintendo is not ready to offer more details than that just yet.]

Online was kind of ambiguous in the Direct. There will be online play, correct?

Bihldorff: Yes, there will be. In the Direct, it was actually a specific reference to the Mii characters and being able to use them online, because they weren’t playable online in the past because of their custom move sets. They’re a little bit of a unique thing online. The other aspect of the Mii characters being online is they are UGC [user-generated content]. Because you could create your own Mii character, some people would occasionally put rather naughty things one their Mii characters.

Bihldorff: Nobody likes that. [laughs] There is a level of curation involved with those things, so I think that’s the only reason Mr. Sakurai made a note of it in there. But yes, there will be online.

And you will still be able to customize the Miis with unlocked materials?

Bihldorff: We don’t have any details on that, but as far as immediate customization goes, yeah, you wouldn’t have to play as just those three default characters.

Trinen: It will still draw from the Mii characters on your Switch. Even though it is not as forward-facing as it was on other consoles, the Switch still does have Mii creation abilities.

How did you react when you found out Ridley would finally be a fighter in the game?

Bihldorff: We were very happy. Obviously, we’re both huge Metroid fans, and it’s not something we were ever demanding be in the game, but just like any other Nintendo fan, we were happy to see another Metroid character come in. I Was certainly curious to see him be playable and find out what his move set is. True to form, Mr. Sakurai has clearly done his homework on Ridley and you see reflected in his movies. I’m excited to see what players can do with him. He’s a heavier character which is not my forte.

He was probably the number one most requested character – this means Goku is next right? He’s probably number two.

Bihldorff: [Laughs, and points to the screen that is currently playing Super Smash Bros. Ultimate’s looping attract screen] There she is right there! She got a redesign.

Trinen: Yeah, she’s based on a Link Between Worlds.

To learn about who is voicing Solid Snake in Super Smash Bros. Ultimate, head here.