“Band of Bastards,” the latest Kingdom Come: Deliverance content has been unveiled today. While comprehensive details about the DLC storyline are vague, the teaser trailer showcases the grit and intensity that Warhorse Studios’ RPG is known for.

Players will once again be navigating the weathered landscape of Medieval Europe as Henry. Alongside a mercenary faction led by the mysterious Sir Kuno, Henry must rise to overcome a new threat.

Band of Bastards is coming to PlayStation 4, Xbox One, and PC on February 5. 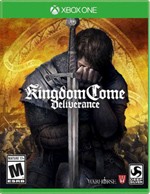