Hollow Knight got its last piece of free DLC this week as an update to the well-received indie game. Much like the games it takes inspiration from, Hollow Knight hides access to the DLC in a way that isn't necessarily easy to find. Luckily, we played through some of it to lend a hand.

The main area of the Godmaster DLC is a zone called the Junk Pit. You're going to head toward the Flukemarm, the large Fluke-birthing boss in the Royal Waterway, and look for a crack in the room just outside her lair in the ceiling. Smashing it open reveals a maze-like room that leads to the Junk Pit. If you have a simple key, of which there are three in the base game, you can just walk right in. If you used all three keys already, then there's a stop you need to make first.

Take the stag to King's Station and make your way up to the Colosseum of Fools. You usually enter the colosseum from the left, but this time drop down to the waiting area, head to the east side of the room, and climb up. Break the wall on the right of the new room and follow an NPC for a new simple key. Now you can return to the Royal Waterways and the Junk Pit just beyond.

Back in the pit, a sarcophagus will prompt you to use your simple key and you'll gain a new power for your dream nail. Now you use said dream nail on the nearby corpse and you'll be transported to Godhome. From there, you can engage in a series of boss fights that make Hollow Knight harder than it has ever been.

Hollow Knight was recently announced for Xbox One and PlayStation 4 set to arrive in early 2019, but is currently available for Switch and PC. You can read our review of the game here. 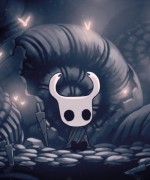