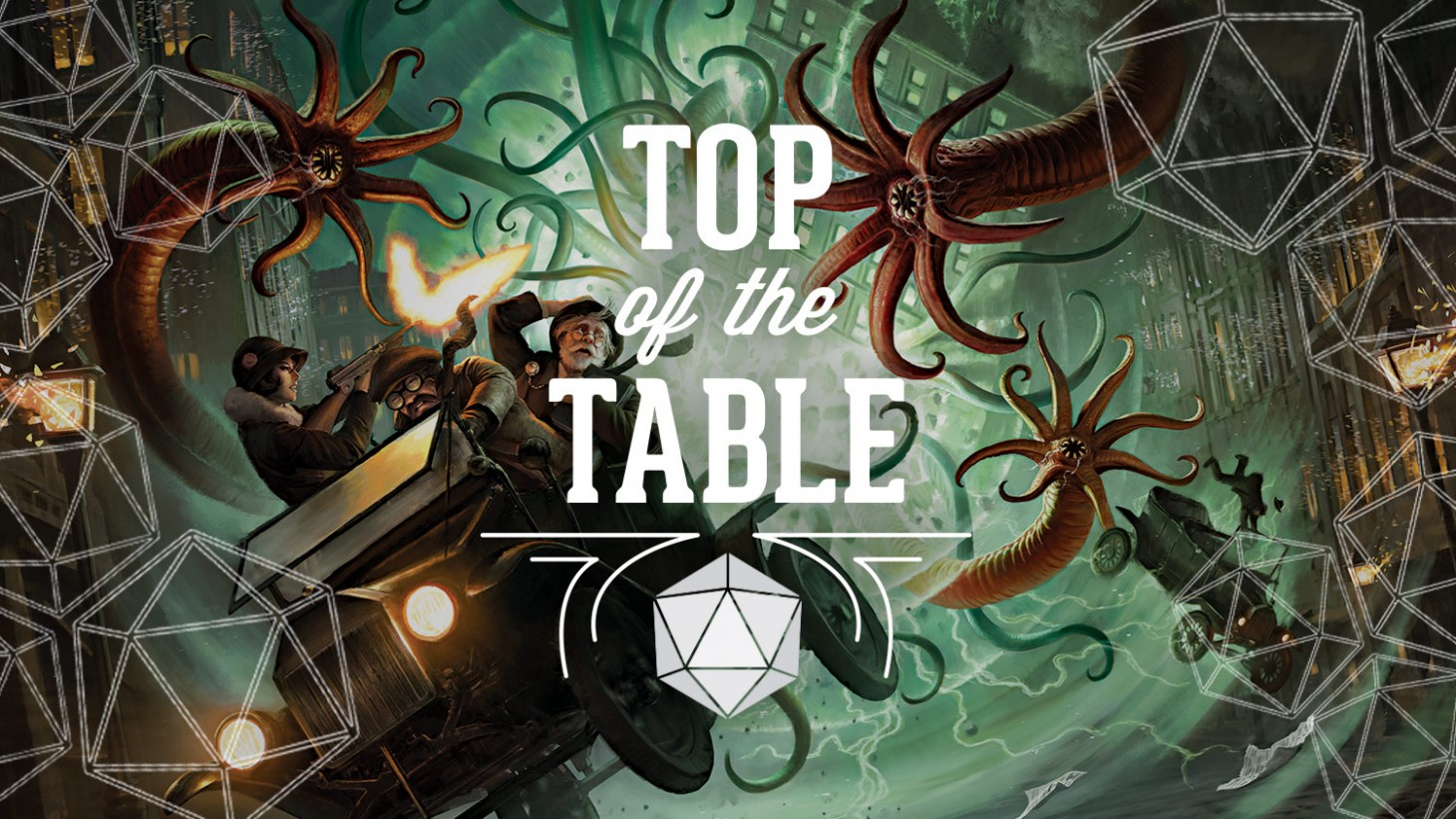 The Return Of Arkham Horror

Arkham Horror has a long history. Originally published by Chaosium as an outgrowth of the Call of Cthulhu role-playing game way back in 1987, its focus on narrative and horror set it apart. Long before the current craze for the Cthulhu mythos gained steam, it offered players a chance to explore the eerie monsters and existential terrors of Lovecraft’s fiction. Fantasy Flight revived the beloved game in 2005 with a second edition, helping to fuel a slew of Cthulhu-themed board games and other media for years that has stretched on until today. Fantasy Flight has built on the strength of the brand, with related games like Eldritch Horror, Mansions of Madness, Elder Sign, and even an Arkham Horror card game. It’s a huge tentpole for one of tabletop’s most prolific publishers, so it’s no small deal that we’re about to get a brand new third edition of the game.

In this fully cooperative experience for one to six players, you and your friends take on the role of investigators of the weird in the small town of Arkham, Massachusetts in 1926. Something is lurking in the shadows, conspiracies are brewing, and a terrible ancient evil threatens to emerge, and you must stop its influence and spread. Along the way, monsters and other dreadful encounters test both your physical might and sanity, potentially even drawing you away into alternate times and dimensions. Arkham Horror is also an unfolding narrative as much as it is a game of strategic choices regarding how to progress, and it’s the oppressive emotional weight and seeming impossibility of victory that gives the game its distinct tone. 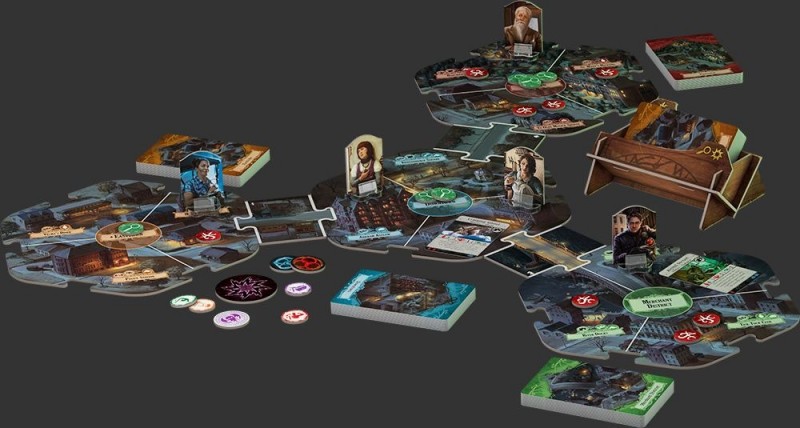 The new board uses double-sided modular tiles, so every session looks different

I’ve been digging into an early copy from Fantasy Flight, and I admit to approaching this new version with some trepidation. Despite some structural dilemmas, fiddly mechanics, and an insanely long run time, the second edition of Arkham Horror holds a special place in my heart. Its insane table sprawl was a feature as much as a flaw; there was something thrilling about setting up that game and diving in with a big group, knowing full well the hours of nightmarish encounters that lurked ahead. The new third edition, at first glance, looks like a completely different game. And you know what? It is. This latest iteration of Arkham Horror is a dramatic reinvention, defying or altering many of the core systems of the older game. It plays in a shorter time, exchanges a static board for a modular one, and revises the flow of play and endgame goals in significant ways. It also happens to be a fantastic board game from start to finish, and a worthy successor to such a well-known series.

The first thing you need to know about Arkham Horror: 3rd Edition is that you don’t need to know anything about Arkham Horror to enjoy it, or even anything about the enigmatic Cthulhu fiction. Maybe you’ve heard people talking about loving one of these games. Or perhaps you have an affection for supernatural horror, and you’ve been looking for a board game that scratches the itch. One of the greatest successes of this new edition is how welcoming it is to new players. Don’t get me wrong, this is a deep and complex game. But smartly written rules get you into your first game quickly. A separate and thoughtfully indexed Rules Reference book answers the questions that inevitably arise during the game, from the specifics of monster movement to what ways you can manipulate dice rolls during a test. Be aware that punishing difficulty and a likelihood of failure is baked into the concept; you’re not playing it wrong, it is simply meant to feel dangerous and haunting. Embrace that collaborative challenge, and your gaming group is likely to fall in love with the awesome setting, which juxtaposes the Roaring Twenties with a provocative brand of supernatural despair.

At the other end of the spectrum, there are the people like me. You’ve played an older edition of the game, not to mention a ton of other Cthulhu-themed board games in recent years. You wonder whether a new version of the same game is worth your time and money. All I can say is that this is the version of the game I plan to deploy to my table from now on. In all the ways that matter, the third edition maintains what I like: deep cooperation between players, a constant sense that defeat is just around the corner, and a core focus on narrative. But the new design elements (from designer Nikki Valens) do away with a lot of the slowdown. The new modular tile-based board still features gorgeous art, but it also means that any given scenario feels focused and different from the last. In previous editions, the Mythos phase that closed out every turn left players feeling oddly disengaged as individual players, and also didn’t balance well to multiple group sizes. The new Mythos phase uses a novel token-drawing mechanic to keep every player involved, with dynamic shifts to the board that everyone is eager to follow. 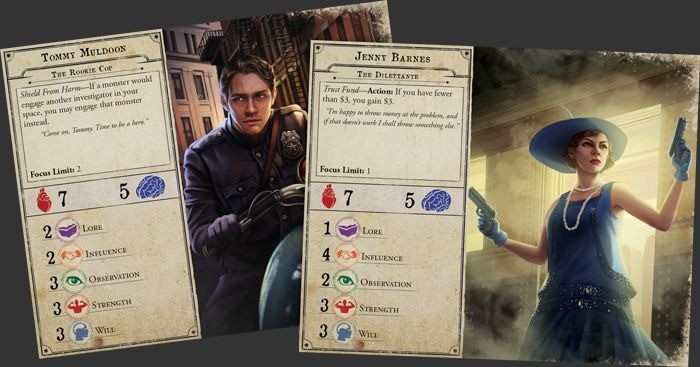 Finally, and most importantly, the focus on narrative is not only maintained, but improved. The prior edition set the investigators against a specific Ancient One, and let the story move forward based on the details outlined about that specific evil entity. The new game offers a subtle shift, putting the focus instead on an actual evolving scenario, represented by archive cards. The unique storyline for that session branches outward in different directions depending on your actions, successes, and failures. At the beginning of the game, you don’t know how to win. The conditions for victory or loss are often contingent on the unfolding narrative, and new events that emerge through the flavor text and rules on a given archive card. The scenarios included in the base games are all incredible, weaving devastating stories of reality gone amuck, malevolent cults, and ghoulish rituals. My only real criticism is the base game only includes four scenarios; the branching nature of how they play out still ensures some replay value, but a few more distinct storylines would have been welcome.

I also really appreciate the new approach to character selection, customization, and guidance. The 12 included investigators all have intriguing back stories and fun special actions, like a dogged reporter who doesn’t believe in his own family curse; early in the game, he fails all the time, but his determination makes him stronger with each failed interaction. Character cards also now offer clear guidance on how to best play your hero; in previous editions, new players could spend the early part of each game just trying to figure out what to do, which in turn could pull the whole team into defeat. But by offering some pointers, that dilemma has been subverted, and turned into an advantage that lets the game embrace unique player roles. You can also customize your investigator’s playstyle with a choice of which starting possessions you use, sacrificing one capability for another. Taken together, these features help investigators feel nuanced and rewarding.

Once enmeshed in the game, there’s a constant push and pull for your attention during each unfolding turn, and I relish the tension that creates. Doom tokens slowly proliferate across the board, threatening to overwhelm neighborhoods and eventually spawn anomalies. But focus too much on the city as it falls into existential nightmare, and you threaten to lose focus on gathering the clues that push your investigation forward. This tension is what leads to the most exciting decisions in a given turn: “As a tommy gun-toting mobster, I know I’m not well equipped to resolve that lore test and get rid of doom, but I’m the only guy close enough, so I guess…” 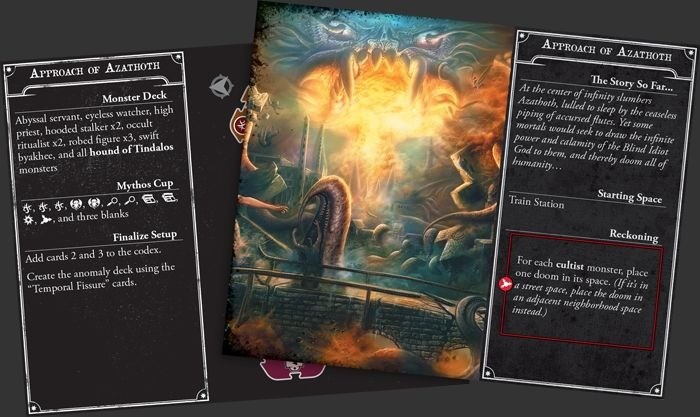 Each scenario unfolds through cards that react to what's happening in the game, changing your goals and options

The streamlined rules and balanced approach for different group sizes has added up to a much shorter run time, and I appreciate the shift. Strategy games of recent years have pulled back from the eight-hour marathons that once characterized a single playthrough of some games, and with a big group, that’s often what you were looking at with the previous edition of Arkham Horror. Here, turns move faster, fewer rules questions arise (though you’ll still have to pull out the rules reference from time to time), and the ever-shifting scenarios keep tedium at bay with new actions and goals as the session plays out. Thanks to evocative writing and stellar art, your game night with Arkham Horror still feels epic – it’s just more likely to conclude before people start nodding off in the wee hours. My sessions tended to run approximately three hours.

For many gamers I know, the earlier editions of Arkham Horror acted as a gateway into thematic and cooperative board games, but the tabletop field has seen tremendous change and evolution in the last decade. Arkham Horror: 3rd Edition is a response to that evolution, but without losing the magic that made us fall in love with the concept in the first place. Whether it’s to be your first trip to this unfortunate city, or a return trip after years away, Arkham is a site that every board gamer should visit at least once. You can track down your own to help close out this year's Halloween celebrations; Fantasy Flight tells me the game is set to release on November 1.

I’m always adding new recommendations to the Top of the Table hub, and you can click on the banner below to peruse those suggestions. If you don’t see something that works for you, I hope you’ll drop me a line via email or Twitter. Every week, I field personalized requests from readers who are looking to find the right game for their group, and I’d be happy to do the same for you and your friends. Whether you’re looking for a great Halloween game, something to play with your kids, or the perfect two-person game for you and your partner, there’s something out there that you’ll love.