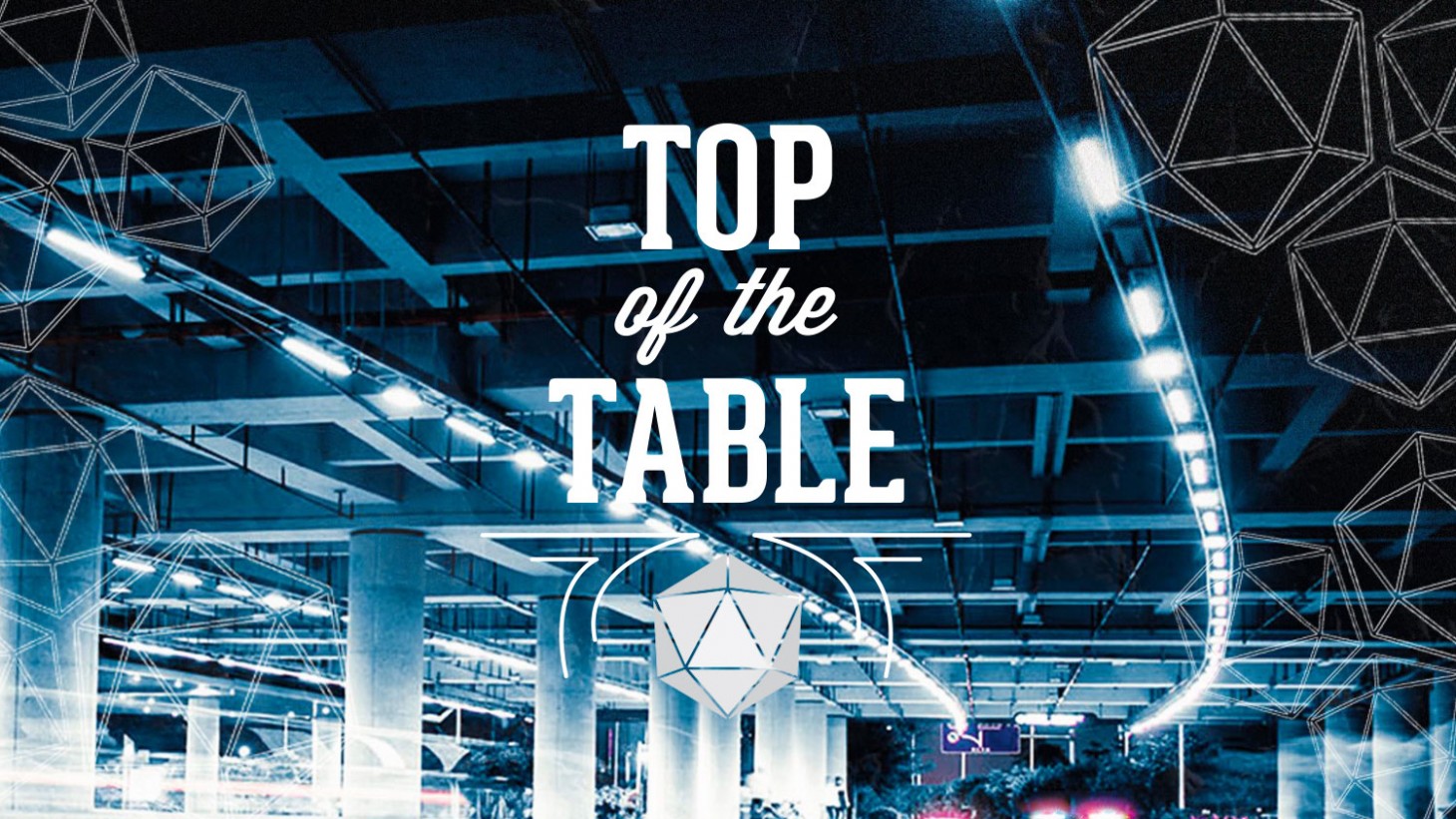 Top Of The Table – Detective: A Modern Crime Board Game

One of the most fascinating evolutions currently unfolding in the board gaming world is the integration of technology into games that are nonetheless meant to be played with friends as you’re gathered around the table. Few recent projects so acutely illustrate the potential for that type of integration as Detective: A Modern Crime Board Game from Portal Games. Action plays out on a board, each player takes a character card, and tokens track things like the passage of time. A deck of cards communicates storytelling beats and many of the clues uncovered, along with an appropriate amount of detective-themed pathos about rain, cigarettes, and coffee breaks. But make no mistake; this is a board game in the truest sense.

But Detective (from Ignacy Trzewiczek, the designer of Robinson Crusoe)  is also an interactive web experience quite unlike anything else I’ve ever played. As you play, you log in to a dedicated website (on any PC, phone, or other connected device) called the Antares Database. Built to feel like an FBI computer system that contains the records of all relevant info, the database works in tandem with the cards you uncover over the course of the game, demanding you search out names, analyze fingerprints, and follow through on leads that might lead to story snippets, questioned witnesses, and more. The database feels immersive and exciting, helping you feel like a real analyst bringing to light details that had until then remained hidden.

In addition to the curated content of the Antares Database, it becomes increasingly apparent that you’ll need to cast a broader net to solve the mysteries at hand, and that means breaking the fourth wall, and finding information on the real internet beyond the database. Whether you somehow know a piece of geographical info, or you have to pull up a map to find it, you still need to somehow suss out that one crucial piece of info. Maybe Wikipedia has a relevant historical entry that has a bearing on your investigation? I felt a genuine thrill as I uncovered real-life information that had a direct bearing on the fictional mysteries that the game presents. 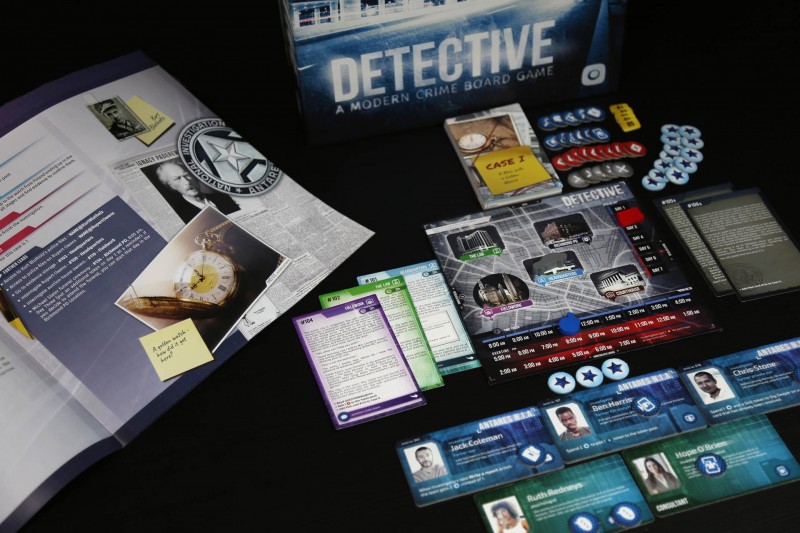 In any given case, you must build your own organizational system for keeping track of clues

I’m writing in generalities about the details of the story because every step of each case is something you should uncover for yourself. Detective is an experience to be played through without spoilers. It’s enough to know that you and your friends are taking on the role of investigators working for a newly formed agency with broad discretion to complete your investigations as you see fit. Over the course of five cases included in the core game, you’ll have to work the clues cooperatively and try to figure out what happened.

Every player controls a named detective, each with different skills. One of you might be a dedicated researcher, with bonuses to track down that hard-to-discover buried detail. Another is a whiz at technology, giving your team the edge with a crucial piece of info left behind from a computer printout. And yet another is a skilled interrogator, able to cull essential admissions from a suspect. Many decisions and actions in Detective are taken as a group, particularly regarding which leads to chase and when to spend limited resources. However, the inclusion of characters for each player helps communicate a sense of personal connection to the story and ownership over the narrative growth. When played with fewer than five players, the extra character cards are flipped, and on their opposite side are consultants, who can be tapped for valuable help without being official investigators.

The sense of true deduction is the best thing about Detective, but it only works because of the surrounding mechanics. And those mechanics are a success because they’re so straightforward and they don’t get in the way of the real fun of trying to figure out the mystery. Gameplay is split up into a designated number of days, and every lead you follow comes with a time cost. You can move between different locations like the lab and the courthouse, but that also takes time. Once 4pm rolls around, you can certainly keep working the case, but now you’re in overtime, accruing stress tokens that can end the game prematurely if you’re not careful. 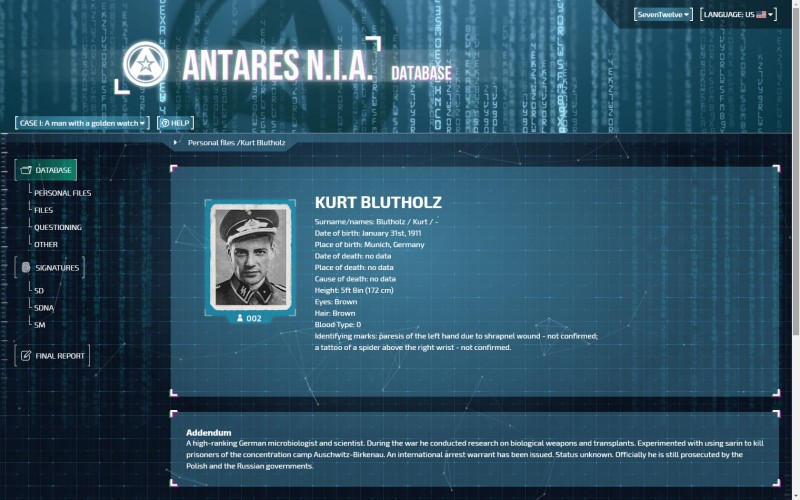 Entries in the Antares Database offer crucial information, but there's never enough time to gather it all

Along the way, the lead cards you draw often have an opportunity to “dig deeper.” By spending one of your team’s precious tokens, you can flip the card, and potentially learn more. Perhaps you realize that the recently analyzed blood sample hides additional info, and you spend a perception token to take a closer look at the actual body tissue. The information you get back may be the thing that breaks the case open, or it could be a red herring.

That’s the magic of Detective, because this is not a game of clear answers. There’s not enough time or resources to chase every lead, and you must trust your instincts to tell you which clues deserve a closer look. Even after you think you’ve figured it out, you could have missed something crucial. Or, you may have to make some deductive leaps to get to the answer. Such is the nature of police work.

When you think you’ve got it all wrapped up, or more likely, when the number of days allotted for your investigation have come to an end, you’ll head to the Antares Database one last time to offer your conclusions. A series of multiple choice questions attempt to ascertain how much you’ve correctly deduced, assigning your team a loss or victory in the case based on the number of victory points reflected through your answers. Win or lose, in a particularly ingenious twist, the events of each case dovetail into one another; figuring out certain clues in your first case may add a surprisingly tantalizing new card into the deck of a later case, which you'll likely play a different night. While each case (or game session) is its own largely standalone experience, the five cases link together into a connected campaign that you can only understand after all the puzzle pieces are out. 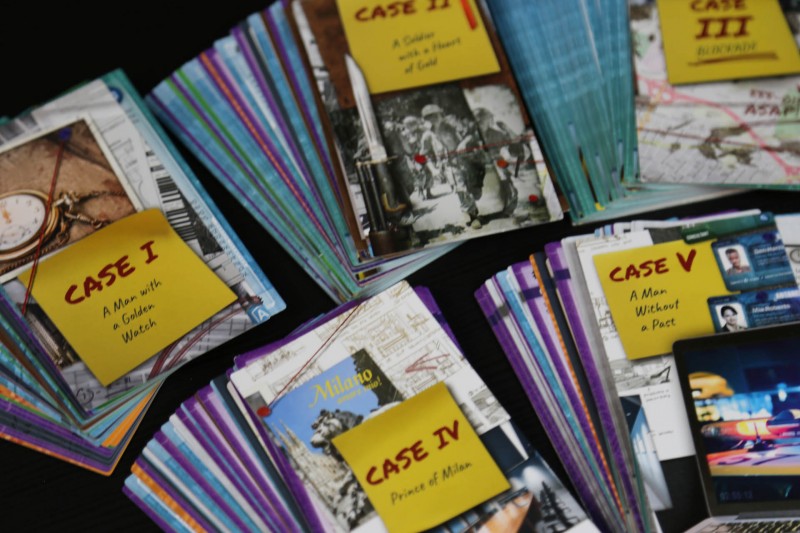 I’ll be the first to admit that Detective is not a board game that works for everyone. The pace is deliberate and demands intense focus and attention. You’ll likely need a few notebooks at the table, just so everyone can keep track of all the relevant info that’s been gathered; the next time I play, I want to set up a cork board and use thumbtacks, index cards, and string to create my map of events and clues. It’s also a game that refuses to be rushed, at least if you hope to really enjoy it; if you’re really considering each card, discussing the clues, and agonizing over how to spend your limited in-game time and resources, you should expect a single case to take three to four hours. And along the way, expect to do a lot of reading, both silently as you each dig into separate clues, but also aloud, as you move the narrative forward by narrating cards and database entries.

Those are important caveats before I tell you that Detective is an absolutely fascinating experiment in game design, and if given the attention it deserves, it will blow you away. The sense of engagement with a real mystery is second-to-none. The game and its clues aren’t meant to be encountered in a linear fashion. Rather, you slowly put the picture together from separate and often incomplete info, making your best guess about where it all leads, and hoping you’ve got it right.

The collaborative problem-solving of Detective: A Modern Crime Board Game makes for a singular night of board gaming fun with the right group of players. But if you’re looking for something else, you can find tons of recommendations through the backlog Top of the Table entries by clicking into the hub from the banner below. I also regularly field email requests for personalized tabletop gaming recommendations for specific groups; if you’d like some ideas, drop me a line.