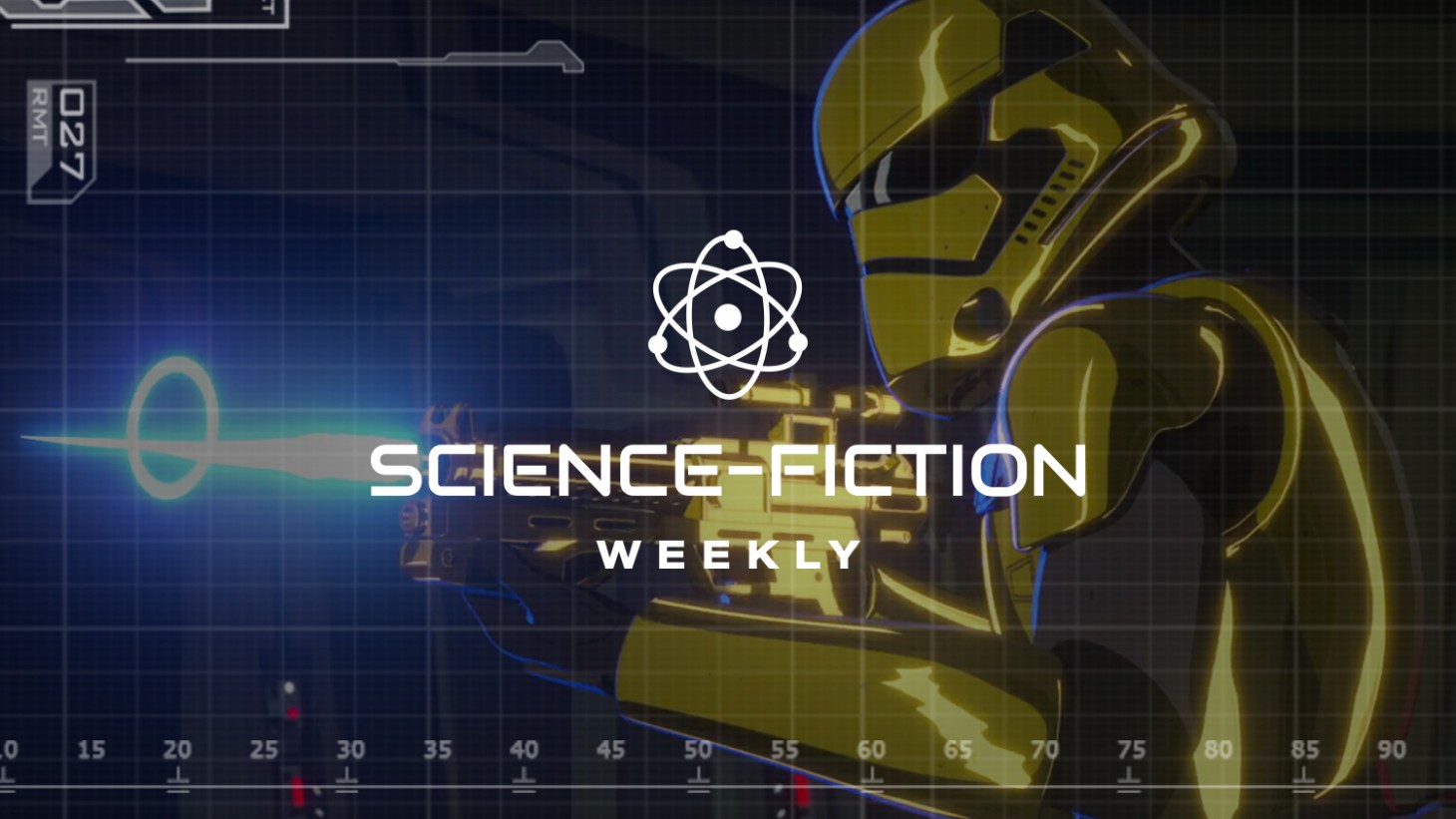 The company that likes selling stormtrooper toys to collectors is back with a new television series, and more importantly, a new stormtrooper design! If you loved Captain Phasma's shiny silver armor, wait until you see the shiny gold stormtrooper! This First Order soldier will make his or her debut in Star Wars Resistance, a new ongoing series coming on October 7 to Disney Channel, Disney NOW, Disney Channel VOD, and later airing on Disney XD. I love the idea of stormtroopers customizing their gear, but introducing an all-gold stormtrooper in the same time frame as Phasma's reign diminishes her unique stance in the Star Wars universe. Some people are saying the gold stormtrooper could be the product of yellow lighting, and may in fact be Phasma, but it doesn't look like that to me. Her cloak isn't present, and the environment doesn't appear to be lit in any way. It looks more like the limited edition Hot Toys collectible. 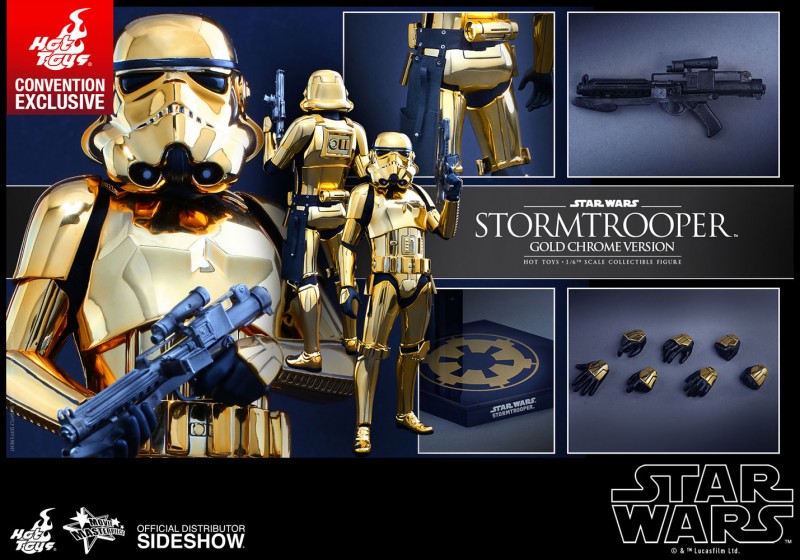 Resistance takes place before the events of Star Wars: The Force Awakens. An eagle-eyed fan who studied Star Wars' website code, believes the show takes place six short months before the film. Oscar Isaac is lending his voice to Poe Dameron, and Gwendoline Christie returns as Phasma, hopefully getting more screen time than she did in her two films.

The show kicks off with a two-hour episode called "The Recruit." In it, we are introduced to a new character named Kazuda Xiono, a pilot who joins the Resistance. No, we shouldn't start the "he isn't in Force Awakens so he must die in the show" rumors just yet, but yes, he's totally going to bite it. One explanation for his lack of participation in the film is his location in the show. His first tour is on the a refueling platform called the Colossus located in the Outer Rim. There's a good chance he's stationed there during the film's time frame. We're also going to get to know Dameron's friend Yaeger, an old pilot who owns a repair shop, who is joined by a comic-relief droid named Bucket, who appears to get into Jar Jar-like trouble. Keep an eye on that droid. I have a bad feeling about him.

I was nervous about Star Wars Rebels before it aired, thinking Ezra Bridger might be annoying, and I have the same thoughts about Resistance and Xiono. I ended up adoring both Rebels and Bridger, and hope the first taste we have of Xiono is just a bad sampling of who he really is.

I know many of you are suffering from "Star Wars fatigue," and another new show isn't going to help things, but I love the art style Disney is going with on this one. The colors really pop, and will make it stand out nicely against Star Wars: The Clone Wars, a canceled series that is coming back!

If you have a lot of time on your hands, all 20 of Marvel's Cinematic Universe films are returning to theaters on August 30, and will disappear again on September 6. You'll only find them in IMAX theaters during this time. This will be the first time The Incredible Hulk is shown on an IMAX screen. It'll be interesting to see which of these 20 films ends up pulling in the most box office receipts. I'm guessing it will be Spider-Man: Homecoming or Black Panther, but the Hulk may get the bump since people haven't experienced it on the big, big screen yet. If you want to see a number of the films' stars gush about the IMAX experience, click the video below.

Star Trek continues to make news. Nothing will likely top Patrick Stewart returning as Captain Picard, but CBS has found a new Spock for Star Trek Discovery. Ethan Peck, who was in Sorcerer's Apprentice, Gossip Girl, and voiced Thorne in Halo 4, will get his Vulcan ears in the forthcoming season of Discovery. Spock's inclusion in the show was teased in the first season, when it was revealed Michael Burnham was raised on Vulcan Ambassador Sarek and Amanda Grayson. Sarek is Spock's father. Much like Anakin making C-3PO and racing in Jabba the Hutt's pod race, the Star Trek universe is apparently incredibly small. Everyone knows everyone.

Over in games, Zen Studios is releasing three tables inspired by Solo: A Star Wars Story for the fantastic Pinball FX3. This pack is releasing on practically every system out there on September 12. The first table is simply called "Solo," and covers a lot of the film, including the Conveyex heist, speeder chase, and Kessel Run. The second table is called the Calrissian Chronicles, and true to its name, spans beyond Solo to Marvel's Lando comic series and to the Star Wars Rebels show. The final table is called Battle of Mimban. This table gives players a different perspective of Han meeting Beckett and Chewbacca for the first time. The Chewbacca mission features something called Mudball multiball.

If you're looking for something to play now, Daedalic Entertainment's State of Mind released on Xbox One, PlayStation 4, and PC last week. State of Mind takes place in Berlin in 2048, at a time when humanity has drained most of its resources. Diseases are also killing off those who are left. The government has risen in power, and has created a policed state, where everyone is watched either through drones or robots.

I've put roughly two hours into this trashumanism tale, and have enjoyed its world and sci-fi themes, but hope the gameplay and pacing pick up. The narrative moves slowly, an is constantly at odds with protagonist Richard Nolan, who disrupts most moments of discovery with angry quips and complaints about everything. He's an unlikable lead right now, but he is going through a lot. He can't keep his thoughts straight as he tries to figure out what happened to his family. I don't mind the gameplay mostly pushing me to click on objects for narrative reasons, but there's rarely a clear indication of what I need to do to other than make sure I click on everything in an environment to make the next sequence trigger.

Daedalic's official listing for State of Mind teases a much bigger narrative arc than just Nolan dealing with personal hell. "This domestic drama evolves into a thriller about a worldwide conspiracy, which at its core aims to determine the fate of humanity: Could a perfect digital utopia be the answer? A virtual paradise not affected by material needs and quarrels? Could a super-AI be our savior – or would it simply declare us as dispensable since it could not be taught the value of philanthropy?"

I've enjoyed State of Mind enough to keep playing, but Nolan needs to chill out a little, and the pace needs to accelerate. Here's hoping the narrative payoff is worth the time I invest.

That's it for this week, folks. Let me know what you think of the topics above, and I'll see you again in seven days.