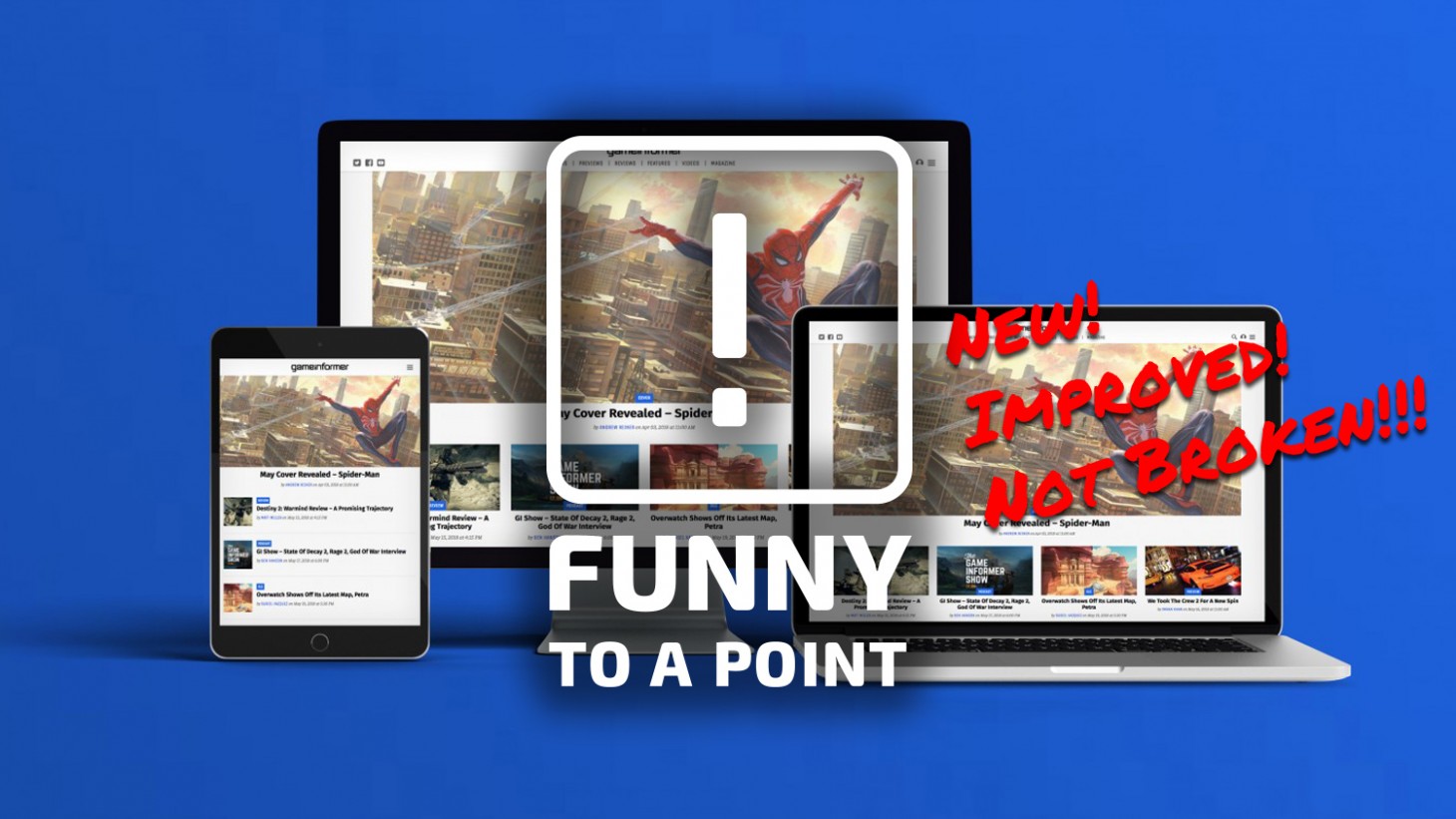 If you’re reading this now, you’re probably aware that Game Informer got a fancy new redesign a couple of days ago (or else you’re terribly confused right now). The update was a long time in the making, and isn’t just a skin-deep improvement – the entire site has been recreated from the ground up to provide a faster, more flexible, and all-around better viewing experience to our readers. That’s hopefully already evident to you – but to truly appreciate the changes, we should take a pleasant stroll grueling death march down memory lane to see just how far we’ve come.

I started working at G.I. in 2009, shortly before the launch of the old website. Back then, the old-old site was a completely different beast, and largely separate from the magazine. Creating stories was a time-consuming, multi-step affair. Here’s an excerpt of the posting instructions that I received as a budding intern:

You get the point. Anyway, the laborious method for posting stories didn’t matter much, because a new website was on the horizon! One that promised drag-and-drop image support and an innovative SKU system that would let us post articles to directories devoted to specific games. Granted, during the transition we had to manually copy over every review, preview, and news story for that innovative new system to function, but I was a new employee so I didn’t mind the busywork – “I get to hang out all weekend with the G.I. crew while prepping the new site? Awesome!”

The old site did indeed streamline the posting process. You simply wrote your story, went through a brief voodoo ritual, and the article would publish – and even sometimes stay published – if the website gods were sufficiently pleased. Things weren’t perfect at launch, but for most of us it was our first real experience creating a website, and we made the naïve assumption that things would only get better as time went on. 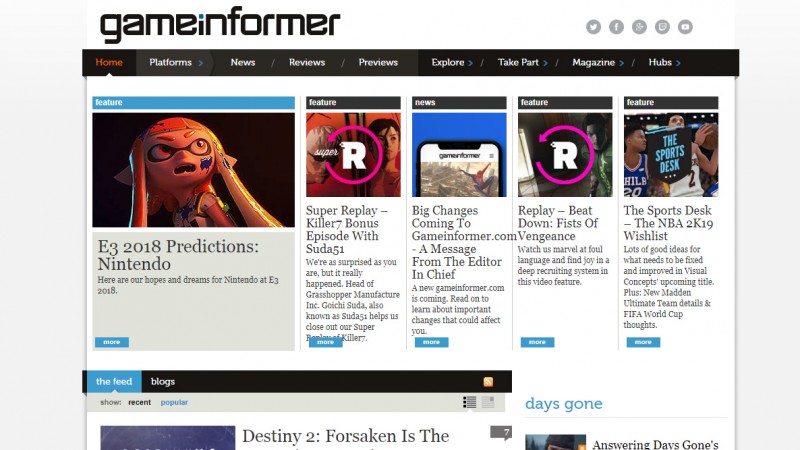 The fact that Andy's announcement post broke the top bar of the old site is surprisingly fitting...

And they did! …until they didn’t. A host of strange and inexplicable bugs popped up on the old G.I. over the years – and now that the site is dead and gone we can actually look back and laugh at them! Here were some of my favorites:

Suffice it to say, all of us at G.I. learned a lot of valuable lessons over the past 8 years about how to create and maintain a website. Granted, most of those lessons fell into the "Rueful Hindsight" category – but the good news is that Andy and our production department capitalized on everything we learned while building the new site. Those of us on the editorial staff have spent months salivating over every progress update. The new website became our mythical Green Place, propelling us through the Mad Max wasteland that was the old G.I. We’d get there some day! Right?! 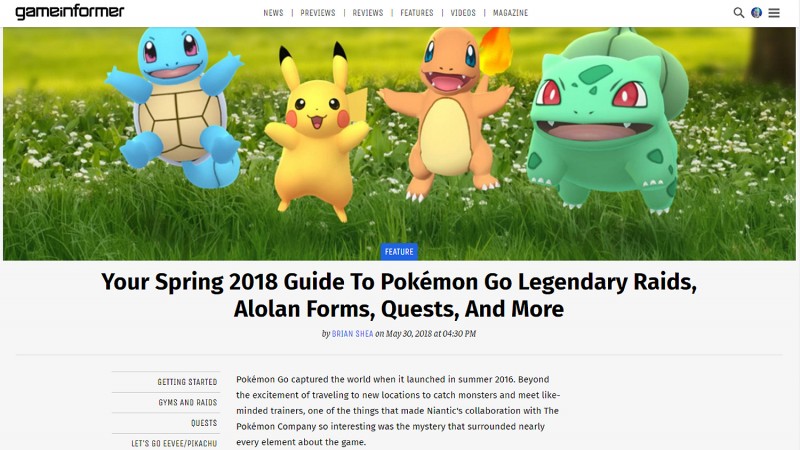 The new site lets us present content in a lot of cool and interesting ways – even if you don't give a crap about Pokemon Go!

Flash forward to an issue meeting a few months ago, when Andy made a cautiously optimistic announcement: The new site was almost ready! E3 served as an ominous deadline – if we couldn’t get it up (heh) a few weeks beforehand, we’d have to wait until after the show and the mad race to write and ship our E3 issue – basically the end of summer. The staff got more tense with each passing week as our might-as-well-be-super-heroes production team worked feverishly to get everything in order. Finally one day, Andy posed a question to the staff: We could launch the new website a mere week before E3, or wait until after the show. Do we really risk taking a brand-new website into the busiest industry event of the entire year?

Turns out that’s an easy call when your current site is a flaming wreck! After all, what’s the worst that could happen? It goes down during E3? That literally happened two years ago on the first day of E3 – we were still writing up all the press conferences and just pushing the stories out into the ether, hoping they'd be there whenever the site decided it was ready to go online again!

And the worst part was we were totally used to it; breaking big stories often meant breaking the website as well – I’m pretty sure the site was running on a gang of pissed-off elves with abacuses who went on strike anytime traffic took the slightest upturn. How could a new site, which supposedly runs on actual computers and stuff, possibly be worse than that?

Needless to say, we took the plunge – and in a disturbing twist no one saw coming, the old site started acting up as soon as Andy published his “coming soon” announcement letter. The site was aware of its own impending demise! You may have noticed G.I. was sporadically down for most of Monday, the day before the new launch. If you think it was because we were tinkering behind the scenes, we weren’t – that was just the last choking gasp of the sentient, Cthulhu-like beast that was the old site. Even now I’m afraid I’m going to get a call from it someday like the end of The Lawnmower Man.

We can also easily add block quotes to articles, no matter how superfluous they may be. Yes, I know this isn't how block quotes are supposed to work, but I'm too excited to care!

Anyhow, the new website is up and running, and despite some hiccups, it already loads faster, has a cleaner interface, and is actually frickin’ viewable on mobile. In fact, my first official test on Tuesday was during my regularly scheduled morning dump, and I was glad I was sitting down and free to evacuate my bowels when I checked it – the new G.I. was so crazy fast I didn’t know how Andy pulled it off! I haven’t seen Suriel for a couple days, so I assume we sacrificed him to a volcano.

And even the search works! I used it to find that link to my old Mindjack review, which was more of a mindjack than the actual game! The new site also gives us editors a bunch of shiny new tools to make our articles better, which you’ll discover over time. Spoiler: They’re awesome!

But the most exciting part of the new site is that it’s in the capable hands of our awesome production team. Seriously, forget the elves – we’ve got wizards working on the site now! The first day Andy trained us on the new site, we started logging our testing notes with production. The next day we had another round of training – to teach us the new tools they whipped together based on our feedback. Production also has way more flexibility in gussying up our stories with custom layout treatments, which you’ll see a lot more of going forward. Expect exciting times ahead!

Ultimately, a part of me will still miss the old site … in the way you sometimes look back fondly on a Dark Souls boss that terrorized you for hours on end. I spent nearly nine years of my (arguably) professional career working on the old G.I., and despite the trials and tribulations, she served us all well. Clearly, there’s only one worthy way to say goodbye: Float the old servers down the Mississippi river in a wooden boat while shooting flaming arrows at it from ashore. I haven't okayed the idea with Andy yet, but I'm going to go ahead and guarantee a video of it after E3!