Like most kids, Doug and Gary Carlston had to find creative ways to amuse themselves. However, as children of U.S. expatriates living in Germany, the Carlston boys didn’t have access to many fancy toys or modern technology. They had books. Self-proclaimed geography nerds, the boys would stay up late into the night quizzing each other out of an atlas – trying to list off all the national capitals or naming the locations of famous landmarks. Years later, Doug and Gary would form their own software company and they’d turn their childhood “game” into an actual product that would become a lasting cultural icon and go on to define educational software for an entire generation.

In 1980, Doug Carlston quit his corporate law practice to found Brøderbund with his brother Gary. The brothers began importing Japanese arcade games and tried to sell Doug’s homebrew legal software to attorneys. As the company continued to expand, the young publisher was constantly searching for new products to market.

“We had a place in the office called the rubber room, where a couple of guys would sit around and just bang ideas off,” Gary Carlston says. “There was a lot of news in the early ’80s about how Americans didn’t know much geography, so I thought we should create an adventure game where people had to use the almanac to solve puzzles, kind of like we had done as kids. I thought that might be a way to get kids interested in the almanac.”

The developers in the rubber room that day were Lauren Elliott and Gene Portwood, and they were ready to take Gary’s idea and run with it. Elliott was a bright-eyed kid with a notebook full of ideas who had walked in off the street one day looking for a job, and Portwood was an experienced animator who had previously worked for Disney on films like Lady and the Tramp and Sleeping Beauty. They were creative individuals, but together they seemed even more imaginative. 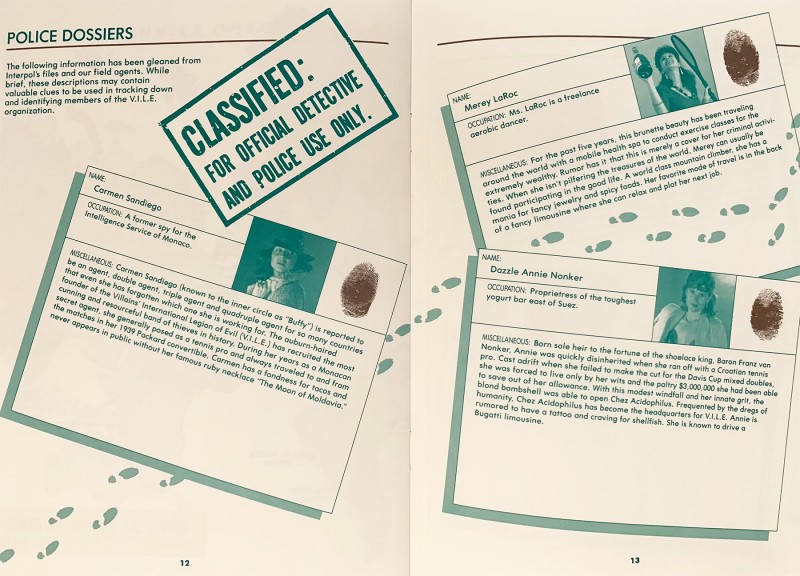 The instruction manual included bios of the entire cast. The models in each photo were people who worked at Brøderbund at the time

Elliott and Portwood were already working with a programmer named Dane Bigham on an adventure game about the life of the Tudor monarch, Henry VIII. In this early prototype, players wandered around England and collected crowns as they learned about the life of Henry VIII. The team decided to take the work they had done on this prototype and adapt it for Brøderbund’s new geography quiz game. The only stipulation was that Gary Carlston wanted to include a book inside the game’s packaging, which players could use as a reference guide.

“The implication was that we could pick any book,” Elliott says. “Gene and I actually went to the bookstore and found a book, an atlas. We did this for every Carmen game after that. That’s how we picked the theme for each game. First it was the World Almanac, and then it was the encyclopedia. We kind of had complete latitude for finding something that would be fun.”

If Elliott and Portwood had grabbed a biology book, they likely would have created a wildly different game, but the designers wanted to remain faithful to the experience the Carlstons had as children. Next up Elliott and Portwood needed a theme, so the designers set about crafting a James Bondish story about a rookie investigator at the ACME Detective Agency who chased a collection of oddball thieves around the world as they stole famous works of art. Portwood named the ringleader for this vile organization Carmen Sandiego.

“Gene was a big fan of those old pulp detective stories, and he loved real characters like Carmen Miranda,” Elliott explains. “We were working in an era where a lot of games didn’t have much personality. You couldn’t identify with any of the characters, but Gene did a really good job with that. That was part of his Disney background. It was his training. He knew the exaggerated emotional style of animation. That really helped because, in those early days, we only had like 16 colors; they were all gross, and you had pixels the size of my thumb, so we had to be creative to make our characters stand out.”

A look at some of the early Carmen Sandiego games

What’s In A Name?

Where in the World is Carmen Sandiego? didn’t sell well when it first released in August of 1985. Part of the problem might have been that Brøderbund’s marketing team didn’t know what to do with the product. “Marketing wanted to kill it,” Elliot says. “They absolutely hated us because the name we picked wouldn’t fit on the box, and the weight of the book made the early boxes fall apart.”

Fortunately, Brøderbund’s geography game was given time to build steam. After about a year on store shelves, Carmen was finally generating some notable sales. “At first it was about 1000 copies a month,” Doug Carlston recalls. “Then suddenly it started ticking up, 2500, 5000, 10,000. It would’ve been pulled from the market after two weeks if it had that kind of slow launch 10 years later, but it was given time for people to find it and discover it.”

As Carmen Sandiego gained attention, it also started to draw criticism. “We got some flak from people who said that we were depicting a Hispanic woman as a thief, and that she was a bad role model,” Gary Carlson says. “Some people threatened to start petitions at Universities, so we created a backstory, which we never really used, that Carmen’s maiden name was actually Larson, so she wasn’t Hispanic at all, but that was never published.”

“We didn’t consider it an educational game,” Elliott says. “We used to call them drill-and-kill games, because back then educational games were full of short animations with questions, and if you typed the wrong answer you would hear this annoying beep and the rabbit would frown. There was no game, you would just do that kind of thing over and over and over again. But Gene always said, ‘Kids are short, not stupid.’ And he thought that all you had to do was teach kids like they were adults.” Sadly, Gene Portwood passed away from a heart attack in the summer of 2000.

These days, Carmen Sandiego is known for her iconic red hat and trench coat, but that signature look was completely absent from her first game. In Where in the World is Carmen Sandiego? all in-game suspects were represented by the same generic avatar. On the cover of the original release, Carmen wore a brown hat and a fur coat. A Brøderbund employee named Marsha Bell acted as Carmen’s model for marketing photoshoots and the manual’s dossier. In fact, all of the game’s villains were photos of Brøderbund employees. Carmen’s red outfit came a few games later, after Brøderbund’s marketing team settled on a unifying style for the character that matched the television shows.

“As Brøderbund grew, that innovation died out over the last 15 years,” Elliott says. “The industry was becoming more competitive, and you had to stick with your winners. Gene and I probably would’ve murdered Carmen by the time we got to that last game, just because there was a lot of other things we wanted to do.”

The Carmen Sandiego franchise is now owned by The Learning Company, which created a Facebook version of the game in 2011, Carmen Sandiego Returns for PC and mobile in 2015, and a Google Earth plug-in earlier this year. However, the iconic thief is probably best known these days for her television appearances: a PBS gameshow that debuted in 1991, a 1994 animated cartoon, and the Netflix original series that debuted earlier this year.

Across all of her incarnations, Carmen Sandiego has helped teach kids around the globe about their place in the world, but it all started with an improbable piece of software that wormed its way into the educational system.

“We knew we had done the best job we could with what was given to us,” Elliott says. “We knew the pieces were there. One of the things people used to say at Brøderbund was, ‘Do the best job you can with anything you do, because even if it fails at least then it’s a good-looking failure.’ We felt that way making Carmen. Everyone was having fun doing it.”

This article originally appeared in the May 2019 issue of Game Informer.

Today, you can relive Carmen's adventures; a few months ago, Google teamed up with Netflix to reenvision Carmen's original gameplay inside Google Earth. And for more classic stories about video game development, read our feature about the pioneering women of the game industry. 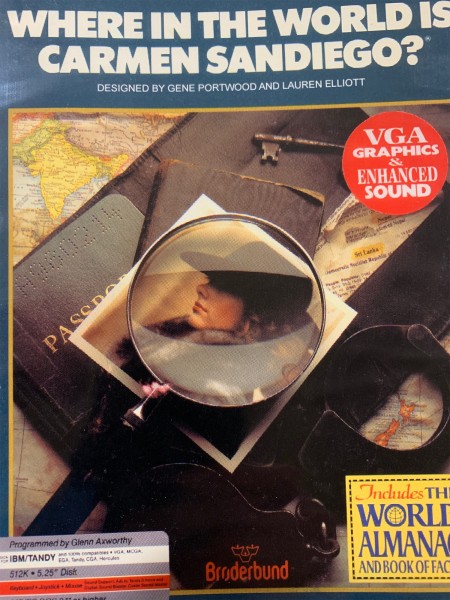 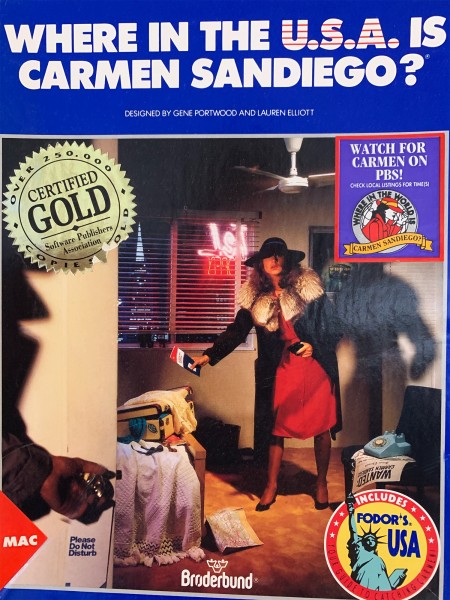 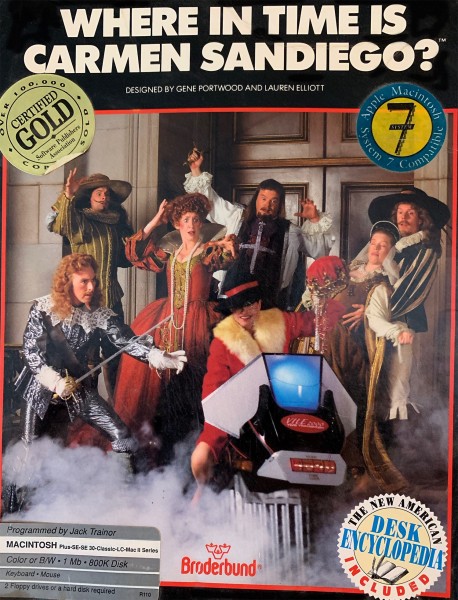 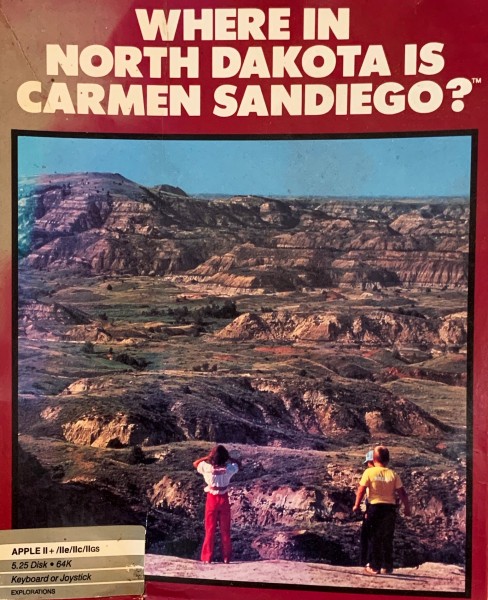 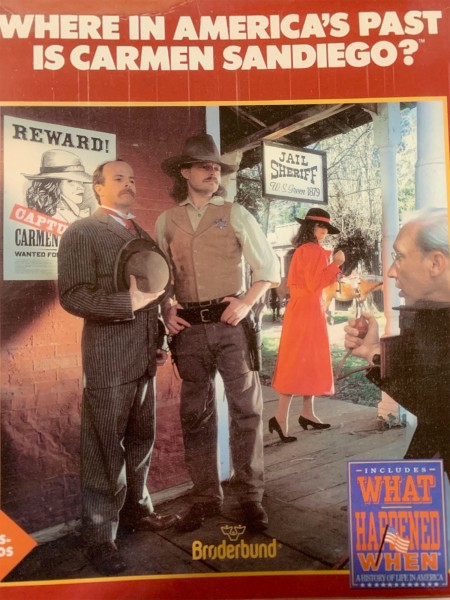 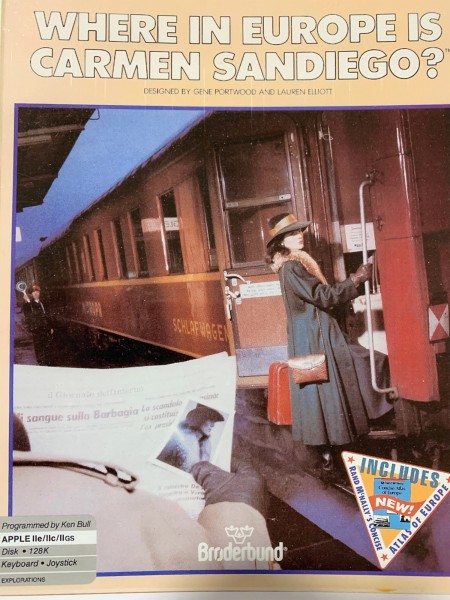