During the opening ceremonies of BlizzCon 2019, Blizzard announced both a new game mode and expansion for Hearthstone, its premiere strategy card game.

Focusing on the fierce winged beasts, Descent of Dragons will feature dragons from Azeroth's storied history. The newest expansion features 135 new cards for players to experiment with, along with a new Hero Card featuring Galakrond. Utilizing the new Invoke cards, players can level up the dragon multiple times for Galakrond to reach his final form.

Descent of Dragons will be available for players starting December 10.

On top of the new expansion, Blizzard also announced a new game mode called Battlegrounds. Featuring eight-player matches, Hearthstone fans will assemble boards and duel opponents until only one is left standing.

Fans who pre-purchase Descent of Dragons, attend BlizzCon 2019, or buy the Virtual Ticket will have access to the new mode starting November 5, while everyone else will have to wait until the game enters open beta.

With BlizzCon 2019 in full swing, the company has lifted the curtain on its core franchises, including Diablo IV, World of Warcraft: Shadowlands and Overwatch 2. 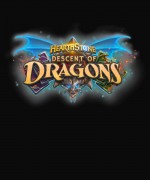