XSeed has confirmed its lineup for E3 this month, as well as release windows for all of the titles it's bringing. Topping the list is the bug-sqaushing mayhem of Earth Defense Force 4.1, which will be available this year for PlayStation 4.

The offerings span systems and genres, and include the previously announced Corpse Party: Blood Drive and Earth Defense Force 2: Invaders from Planet Space for Vita. Here's the full lineup. Corpse Party: Blood Drive (Vita) - Fall 2015
The third and final game in the Heavenly Host trilogy is a narrative-heavy horror game. The title features binaural audio to maximize the impact while wearing headphones. Earth Defense Force 2: Invaders from Planet Space (Vita) - Fall 2015
Earth Defence Force 2 will be released in the west for the first time with four-player cooperative play, a new class, and English voiceovers. The Legends of Heroes: Trails of Cold Steel (PS3, Vita) - Fall 2015
The Legend of Heroes comes west again. This story takes place in the same world and continent as Trails in the Sky. The title will support cross-save between PS3 and Vita. Return to PololoCrois: A Story of Seasons Fairy Tale (3DS) - Winter 2015
This upcoming farming and life-simulation game for 3DS also features turn-based combat, 600 items, and almost 100 quests across over 25 hours of play. 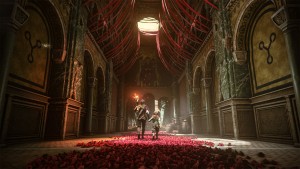