GDC 2011 marks the third year of the Women in Gaming Awards, a reception hosted by Microsoft and the IGDA Women In Games special interest group that recognizes leading ladies in the gaming industry who have played key roles in development across all genres and platforms. The event held at the Great Room in the W Hotel in San Francisco this afternoon honored women in the following categories: Art, Audio, Business, Design, Engineering, Production, plus a special Rising Star Award. Check out the full list of nominees and winner bios.

Tasha Harris was born on Christmas Day and has loved gaming ever since she received her Atari 2600 at age 8. She has also enjoyed drawing her whole life, and got introduced to animation through a high school summer program. After studying traditional 2D animation at Cal Arts, she worked at Pixar for nine years before coming to Double Fine in 2006, where she was lead animator on Brütal Legend. Following Brütal Legend, Tasha took on the role of project lead and conceived the Halloween-themed RPG, Costume Quest, which was released on XBLA and PSN in October of 2010. She also draws an autobiographical comic on Double Fine’s website.

Emily Ridgway is best known for her work as audio director, sound designer, music director and writer on award-winning games such as BioShock, Brutal Legend, Costume Quest, Destroy All Humans, and most recently, Stacking. Since her start in the games industry in 2004, Emily has been awarded over 40 awards for her work, including Best Writing and Best Audio at the Game Developer Choice Awards, as well as 8 awards from the Game Audio Network Guild, including Best Overall Audio, Best Sound Design, and Best Original Score, to name a few. She also received the AIAS award for Outstanding Achievement in Soundtrack for her work on Brutal Legend.  Emily now runs her own game audio consulting firm, Emily Industries. She continues to work with industry icon and childhood hero, Tim Schafer, and the Double Fine team on new creative, original IP. Emily is always on the lookout for more interesting and creative game projects to bring to life. When she's not making amazing game audio, she's designing comprehensive university level game audio curriculum and helping people start a career in game audio.

Kellee Santiago is president and co-founder of thatgamecompany. She graduated from the MFA Interactive Media program at the University of Southern California School of Cinematic Arts where she teamed up with fellow student Jenova Chen on the student-created game, Cloud. The game went on to become critically acclaimed, after which the two decided to begin their own studio, thatgamecompany, and landed a three-game deal with SCEA  to develop downloadable games for Playstation Network. Their first two commercial releases, flOw, and Flower, went on to become award-winning and two of the top downloaded games on PSN. Kellee speaks around the world at video game, business, and entertainment conferences on the possibilities of video games, entrepreneurship, and better methods for video game development. In 2010 she became a TEDFellow, and was recognized as one of The Ten Most Influential Women in Games of the Decade. She is also a partner in IndieFund, which aims to support the growth of games as a medium by helping indie developers get financially independent and stay financially independent.

Chris Trottier was part of the “new wave” of game developers who came through the children’s educational software market in the 90s. As such, she brought a mass-market perspective to teams who had historically been making games for hardcore gamers. With passion for simplicity, fictional charm, and player expression, she has been a strong voice in franchises like The Sims and Farmville. Chris loves game design as a career that exercises both analytics and creativity. As a former math and physics major, Chris is prone to geek out on the algorithms, mechanics and tuning of the games; but she takes her biggest inspiration from players who are wildly expressive.

Christina Coffin is a 16-year veteran currently working at DICE on the Frostbite Engine 2 adopted by multiple projects and studios within EA. Her main focus in game development is rendering, performance, and platform-specific low-level programming for consoles and high-end PCs. Her experience spans multiple generations of consoles, involvement in multiple game engines used at several AAA developers, as well as multiple genres of games. She has participated in game industry-related architecture review boards and peer reviews rendering research. Her current game project focus is on Battlefield 3.

Jade Raymond is the head of Ubisoft’s new Toronto studio, and is perhaps best known as the producer of Assassin’s Creed and executive producer of Assassin’s Creed II. Jade got her start in games at IBM and Microsoft, while she was studying Computer Science at McGill, and took her first full-time job in the game industry at Sony Online where she was lead programmer on titles such as Jeopardy! Online and got to start up SOE’s first R&D team. After Sony, Jade was recruited by EA/Maxis to be a producer on The Sims Online. 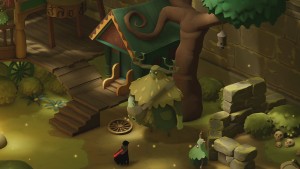