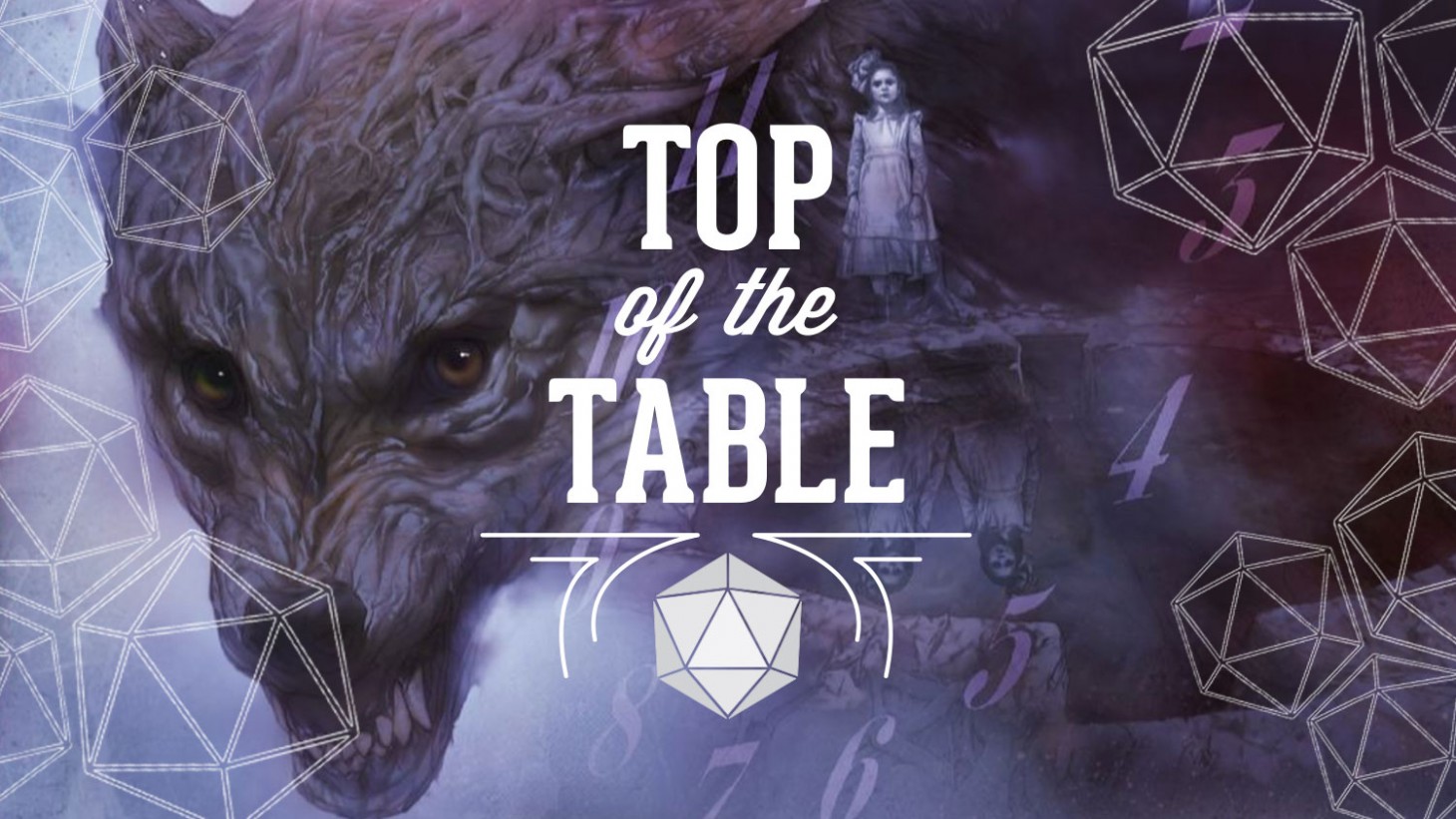 Top Of The Table – An Exclusive Look At Betrayal Legacy

Few thematic board games have done as much to draw new players to the hobby as Betrayal at House on the Hill. The formula is immediately intriguing: Join forces with your friends to cooperatively investigate a mysterious mansion, but with the knowledge that one of you might actually be a traitor, actively working to nefarious ends and the defeat of everyone else. The game encourages emergent stories, mixes horror with snippets of humor, and its modular tile system and multiple “haunts” keep the game replayable time and again. “Essentially, Betrayal at House on the Hill is a haunted-house short-story generator, which was always appealing,” says Rob Daviau, one of the designers of the original game. “Every time you go in, you’re going to get a different story, from the way the house is laid out, to how the house is haunted, to the characters, cards, and actions. All of those come together to generate a story that relies on great haunted house tropes.”

Well over a decade after the release of the first edition of Betrayal at House on the Hill, the new Betrayal Legacy is aiming for a release later this year. At its core, the new game uses the same rules and formula that made the original game so fun. But imagine if every session you played had real consequences, and an ongoing story flowed from one game night to the next, completely shaped and customized by the decisions, victories, losses, and betrayals that came before.

Rob Daviau has returned, this time as lead designer, to guide the creation of this new game being published by Avalon Hill. “There was only one person that could possibly do Betrayal Legacy,” says brand manager Shelly Mazzanoble. “If Rob had said no, we probably wouldn’t have made the game.”

Rob Daviau was one of the original designers of Betrayal at House on the Hill, and he's now lead designer for Betrayal Legacy

Beyond his experience working on the original Betrayal at House on the Hill, in more recent years, Daviau has been the originating and most strident representative in the design of legacy games, having co-designed projects including Risk Legacy, Pandemic Legacy, and SeaFall. In each, players follow a campaign from one session to the next and watch the way both the story and rules evolve in response to player choices. “Some of the actions you take in any one game will cause permanent changes to the game, so when you start the next game, it’s different,” Daviau says. “Not only is it different from your first game, but it’s probably different from someone else’s first game, because whatever decisions or actions they took in the first game will change their game in a different way. So, you end up stringing together a series of board games almost like episodes in a TV series. You’re doing things like writing on things, ripping them up, and putting stickers down. It ups the stakes.”

The most intriguing aspect of Betrayal Legacy is its treatment of time, particularly the dynamics of family heritage, and the changing nature of horror across decades and centuries. In a story spanning hundreds of years, it’s the enigmatic house up on the hill that is the true main character. Players watch it as it twists and reforms across the generations, terrifying and killing its visitors with new horrors fit to that era’s greatest fears. Each player takes on the role of a family and its many descendants, and plays members of that same family as they return time and again to the same site that so haunted their ancestors; something (it would be a spoiler to know what) keeps dragging them back.

“The game itself starts in 1666, with the prologue,” Daviau explains. “And every game you play goes forward roughly 25 years – about a generation. And we end up in 2004, which allowed us in every chapter to look at that section of history, and think about what was scary at the time. What were people afraid of in 1725 versus 1863? The content and flavor of each chapter could be fit to that period of history.” In the early 1800s, as Mary Shelley scared readers with Frankenstein, the haunts in Betrayal Legacy echo that unease that confronts the fears of science gone amok. A couple decades later, it’s Edgar Allen Poe’s madness-inducing The Raven that might inspire dread. In each session, players face a random haunt customized to the era – one group’s threat could be different from another group’s. But the way the players confront that haunt adds new event cards into the deck, and generations later, those events crop up, reminding everyone of the earlier disaster. “If there’s a bloodbath in the basement in one game, then in a future game there’s a higher chance of drawing an event card in the basement that might be called bloodbath," Daviau explains. "You walk into a room, and there’s blood dripping from the wall, and ghosts are screaming.” We got an exclusive first look at the final cover art. Click on the image for a larger version

Sometimes your playable character carries over from one session to the next; the irascible teenager in the early 1900s is the world-weary old man in a subsequent session. At other times, you might play your prior avatar’s descendant. Either way, you create and name your hero, but he or she is always a member of the same family, and a predisposition to traits like physical might, speed, or sanity carry over. “There are five different minis that you get in the game,” Daviau says. “There’s an adult male, adult female, younger male, younger female, and then a child. Instead of that being the same character every time, at the beginning of the game, you pick one of the figures, and put your family’s colored base on it.” People weave together their own family story, and can even choose to role-play traits that carry over from one generation to the next.

As the game begins, the first task that gets the ball rolling isn’t especially honorable. “It’s a homestead somewhere in the New World,” Daviau says. “We never give it a particular place, but I live in New England, so in my mind it’s always very close to where I live. You’re at a house because the family that lived there died. You are there to look through their stuff and see if you can find something valuable. Each of you pretends that you’re there to honor the dead, but you’re not fooling anyone. The families aren’t noble, or driven by some higher nature. They’re fairly petty.” As they plunder the house, the players find treasures left behind by the previous inhabitants. You name those items, put a sticker crest on them, and claim them for your family. If the item shows up decades later in a different session, it’s an heirloom, and it’s more powerful when wielded by a member of your clan.

New tiles will enter the game as the sessions progress, and newer tiles will be era-appropriate for the years in which they're introduced

Betrayal Legacy unfolds over a prologue and 13 linked chapters. In each, the legacy elements layer on additional depth, rules, and storytelling reveals. Prior components are discarded or destroyed, and cards get written on by the players. A big part of the ongoing legacy is the deaths that have happened in the haunted house, including the deaths you might face as the story is told, and exactly what is left behind from those deaths. “You can see on the board at the beginning that some of the tiles have ghosts on them,” Daviau says. “And there are spots on the tiles where more ghosts can live. Some places have a higher haunting potential than others. How ghosts come into play is unknown at the beginning, but most people are not surprised when they find out how that happens. Everyone’s house will have a slightly different ghost population, both in quantity and location.”

No matter how your horror novel plays out, after the final chapter concludes, Betrayal Legacy will remain playable. “After you’ve done 14 chapters, you have an infinitely replayable game that’s fully customized,” Daviau says. “You will have only seen about a third of the haunts that are in the game. You can keep playing it.” That’s a trait that isn’t shared across all legacy games, and boosts what is already likely to be an engaging game to go back onto the table with frequency.

Our first look today at the final box art for Betrayal Legacy hints at the tone that Daviau’s team is shooting for. “We definitely went PG-13, and not PG,” Daviau says. “The original game has a certain tongue-in-cheek quality, and plays on a lot of monster movies from the ‘50s. Some of those are kind of serious, and some of them are more like a ‘I was a teenage werewolf’ sort of feel. People weren’t quite as tongue-in-cheek about their horror in 1740. ‘No, there are monsters that live in the woods, and I’m terrified.’ So, we tried to make Betrayal Legacy a little more serious. There are still a lot of winks and jokes, but the cover immediately sets the tone.” While Betrayal Legacy doesn’t go for gore, the cards and narration have an unsettling quality that maintains its roots in horror.

Betrayal Legacy is targeting release in November of this year, which works out well, since the game’s sessions are also set in that time of year. “What’s the spookiest month? Early November,” Daviau declares. “All the leaves have fallen, and they’re wet and brown, and there’s no more apple picking. The sun is setting really early, and there’s a few trees without leaves on them. Once we figured out what the outside would look like, every chapter started to be fall.”

In conversing with Daviau, it’s clear that Betrayal Legacy is a passion project. Not only was he involved in the original game’s inception, but it’s also a personal favorite for him. “I have worked on dozens of games, and probably brought to market over 80 in a 20-year career, and Betrayal at House on the Hill is the only game that I have worked on that I regularly want to play after it’s published,” Daviau says. Betrayal Legacy has a high bar to cross when aiming for that same kind of longevity – players can make up their own minds if it succeeds in just a few months.

As you wait for a chance to confront the dangers of the haunted house, you might want to peruse our backlog of Top of Table articles, including some great similarly themed horror games that are appropriate for Halloween, and our list of the Top Tabletop Games of 2017 (which included Daviau’s Pandemic Legacy: Season 2). As always, if you’re looking for a personalized board game recommendation for your friends or family, drop me a line via email or Twitter, and I’ll do my best to provide some suggestions.