Before Street Fighter II, Resident Evil, or Monster Hunter, Capcom was defined by one tiny blue robot. Mega Man's mix of excellent level design, colorful characters, inventive weapons, and fine-tuned difficulty allowed it to stand out from other platformers on the NES and helped the blue bomber build a legacy that is more than 100 games strong. For Mega Man's 30th anniversary we look back at how Capcom built one of the industry's most endearing icons.

Built For Consoles
In the late '70s and early '80s, Capcom was a computer and technology company that had achieved moderate success in the arcade industry. By 1987, Capcom could sense industry trends were shifting toward gaming consoles, so the company put together a team of six game designers and tasked them with developing a game for consoles that could compete with popular titles of the  era like Super Mario Bros., Contra, and Castlevania.

An introspective designer named Akira Kitamura led this charge to create an action game originally intended to be based on the popular manga character, Astro Boy. However, when Capcom's licensing deal fell through, Kitamura was forced to design his own characters from scratch. Kitamura began sketching concepts for a series of robots that might be a good fit for a side-scrolling shooter.

Initially, Kitamura felt that Capcom's new game would be a frantic run-and-gun shooter, with a feel similar to Capcom's earlier arcade hits like Commando and 1942. However, the project's programmer was so meticulous that he insisted on implementing several internal safety checks into the game's code. This created a sturdy codebase with few bugs, but it also meant that the NES couldn't process the game as quickly as most shooters. As a result, Kitamura realized they would have to design a slower action game - maybe something like a platformer.

Kitamura gave his robot designs to one of the company's new hires, a young artist named the Keiji Inafune, and asked him rework them for game and design minions for this hero to battle. One unexpected benefit of designing a slower game was that the team had more computational resources to devote to their main character, so Inafune put them to use. Kitamura's initial designs featured a white robot, but since the NES had a greater spectrum of blue hues, Inafune felt that they could create a better-looking protagonist if they used a couple different shades of blue.

"We tried hard to make Mega Man come to life," Inafune told Game Informer in 2013. "We wanted to make him look alive, so that the user could really feel attached to the character and see Mega Man as a friend. Back in the day, there was limited game capacity, and we had to really be creative to squeeze everything into the cartridge. So we fought to be creative and made it to show the bullets shoot from the arm, the eyes blinking, and the body ducking before each run." Finding A Formula
As the main character started to take shape, so did the basic game mechanics. The team came up with a rock-paper-scissors mechanic where their main robot would steal weapons from boss enemies and use them against other robots who were weak against certain weapon types.

"The number one thing I wanted to do in Mega Man was to make the different weapons interact more with the enemies and the backgrounds," Kitamura said in an interview for the manga collection Rockman Maniax in 2011. "Enemies, special walls, the clouds, the trees, all of them would be alterable by the weapons, sometimes helping, sometimes hindering the player. I wanted the bosses to have different reactions depending on the weapon you used - shooting a boss with a certain weapon could make him get bigger and bigger, or cause him to divide and multiply, or get more HP."

Unfortunately, hardware restrictions forced the team to pare back this design until their hero's various weapons only had different effects when used against each boss. This feature was still wildly inventive for the day. After the team coupled this weapon-stealing system with the fact that players could choose the order in which they tackled each stage, they started to feel like they had something special on their hands.

Still, Kitamura wasn't done. He began obsessing over game difficulty, and would play other difficult games over and over again, trying to analyze and perfect a formula for addictive gameplay. He figured that part of the formula included game length. Kitamura wanted to ensure that each stage was fun to replay and could be finished in about an hour, so he would measure off each level by walking through them and timing himself.

Another big component to Kitamura's formula was enemy behavior. He determined that enemies needed to behave in consistent but sometimes unpredictable ways. Therefore, single, weaker enemies would appear in waves of three or four. Each enemy in a wave would use the same attack, but the difficulty of each enemy in the wave would gradually rise until the last enemy, which would be easier. The thinking behind this was to leave players with a softer impression of the difficulty. Kitamura reasoned that people were more likely to return to a game that was hard but seemed beatable. If the last enemy in a wave was the easiest to beat, then players would feel like they were learning and getting better at the game.

It's debatable if this was the perfect solution for addictive gameplay, but as the team playtested their game, they felt like they had found a fun formula. The only thing they needed now was a name. Starting At Rock Bottom
Capcom had been kicking around names for a long time, but none of them felt right. Titles like Battle Kid, Mighty Kid, and Knuckle Kid were all considered, but they failed to communicate what the game was about. Since Capcom's new game was about stealing other robot's weapons, like a game of rock, paper, scissors, and since the main robot rotated through a rainbow of colors as he changed weapons, the team gravitated toward the title Battle Rainbow Rockman. However, that title was deemed too long and was eventually shortened to Rockman.

While the Japanese still know Capcom's little blue robot as Rockman, when he came to the States, he was significantly rebranded. Capcom of America's senior vice president Joseph Marici thought the name Rockman was nonsensical and pushed to change the title to Mega Man. The U.S. team also wanted to make Mega Man seem less cute in hopes that he would have a greater shelf appeal, so they commissioned new box art. This rush job resulted in one of the most notoriously bad box covers in history; the character on the front looks nothing like the adorable blue hero in the game.

Capcom's Japanese offices blamed the U.S. box art for the game's poor sales, but Mega Man's first game didn't make waves on either side of the Pacific. Fortunately, Capcom was willing to give Kitamura and his team another chance, but it wasn't willing to commit a lot of resources to another project. Therefore, the Mega Man team was given only three months to make a sequel - an incredibly short deadline even for the late '80s.

Despite the time crunch, Kitamura's team knocked it out of the park the second time around. The team polished the action, found a better difficulty balance, and created even more Robot Masters. The original Mega Man featured only six robot bosses, but Mega Man 2 upped the total to eight, which became the series standard. While the original Mega Man had established the series' formula, Mega Man 2 fine-tuned that design to the point that people took notice.

The difference was apparent in the sales, too. Mega Man 2 sold more than a million copies. Capcom immediately greenlit a sequel, but Kitamura was out this time around since he had left Capcom shortly after the release of Mega Man 2. The third game in the series was given a new director. This new director left the project halfway through development for reasons that are still unknown, which left Capcom in a lurch until character artist Keiji Inafune stepped up to the plate.

"The reason I [say Mega Man 3] is my least favorite wasn't because of gameplay or that I didn't like the game, but it was mainly because of just what was behind the release of the game," Inafune told Nintendo Power in 2007. "For example, I was forced to put the game out before I thought it was ready, and we lost the main planner along the way, so I had to basically fill in that role to finish the game. I thought that we needed more time, and we had two months to finish the final 50 percent of the game."

Fortunately for Capcom, Inafune was the right man for that job. Over the course of the next 20 years, Inafune would shape nearly every Mega Man project and help take this little blue weapon stealer to new heights. Taking Over The Big Blue World
By the early '90s, gamers around the world had fallen in love with Mega Man, and Capcom was happy to deliver new adventures - pumping out six Mega Man titles on the NES alone, three of which came out after the SNES had hit shelves.

As the console generations wore on, Mega Man evolved with them. Spin-off series like Mega Man X explored a darker, slightly more mature future. The Mega Man Legends games let fans explore a fully 3D world. And the Mega Man Battle Network series had the blue bomber experiment with tactical-RPG combat. However, while these various spinoffs explored new mechanics, Mega Man's mainline series remained surprisingly true to the original formula, which speaks to the creative genius of those early games.

Mega Man was Capcom's first original creation for consoles, and his success gave the company leverage to become a major player in the game industry. Over the last three decades, Mega Man has given us a series of thrilling adventures; he's blasted his way through a seemingly endless stream of Robot Masters and tried on an entire spectrum of color combinations. He's worked his way into Saturday morning cartoon lineups and toy shelves. He's become a classic gaming icon that stands next to giants like Pac-Man and Mario. Mega Man's white-knuckle gameplay and precise platforming have thrilled us for 30 years. We can't wait for 30 more. 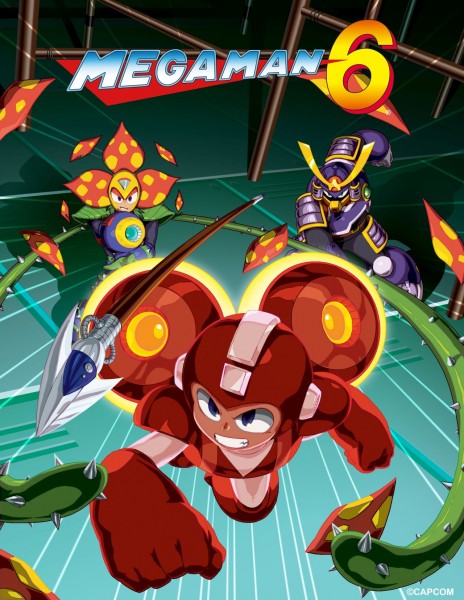 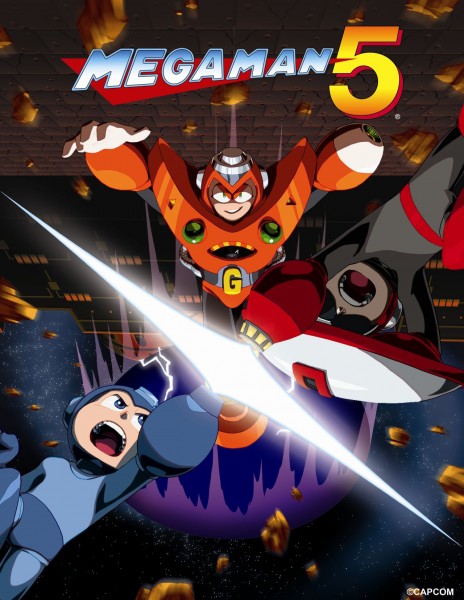 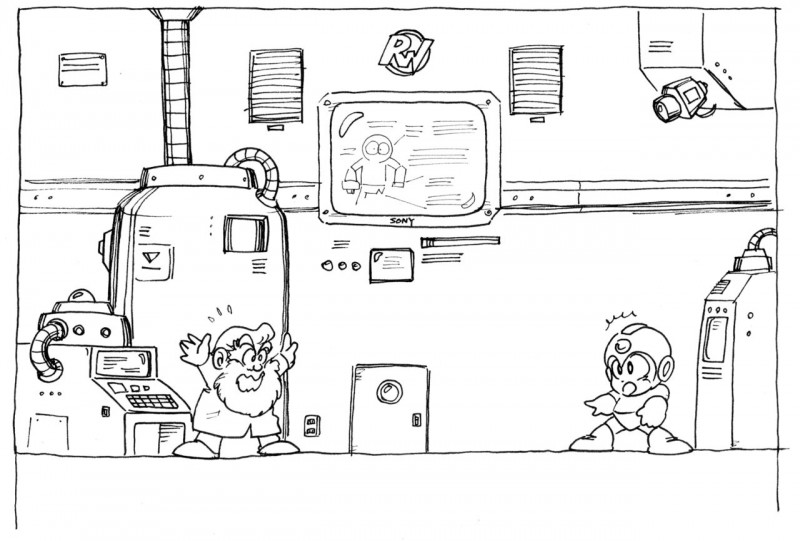 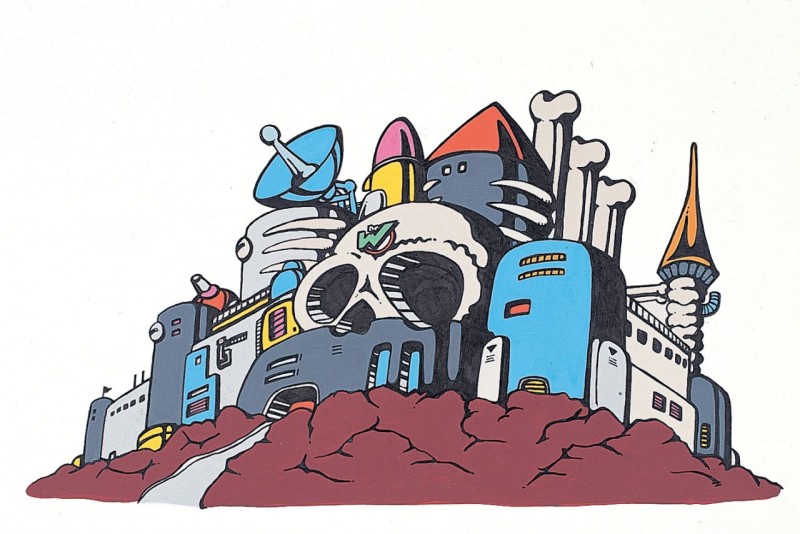 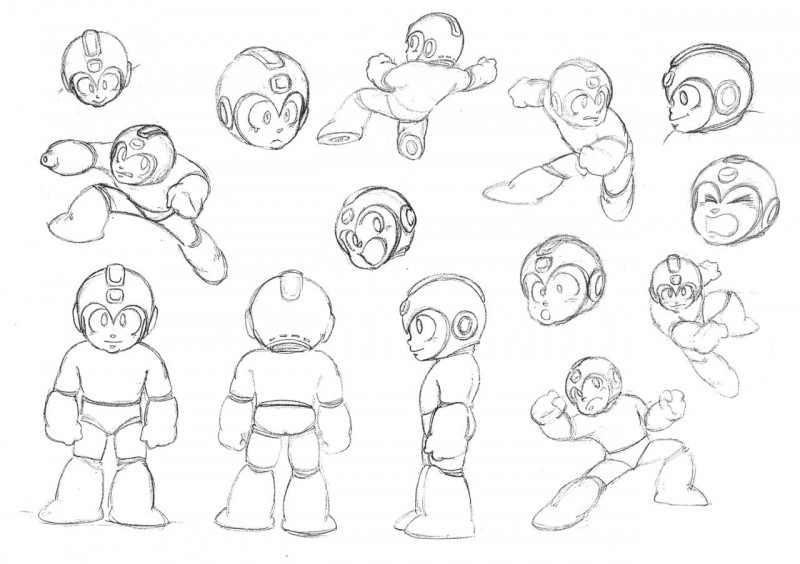 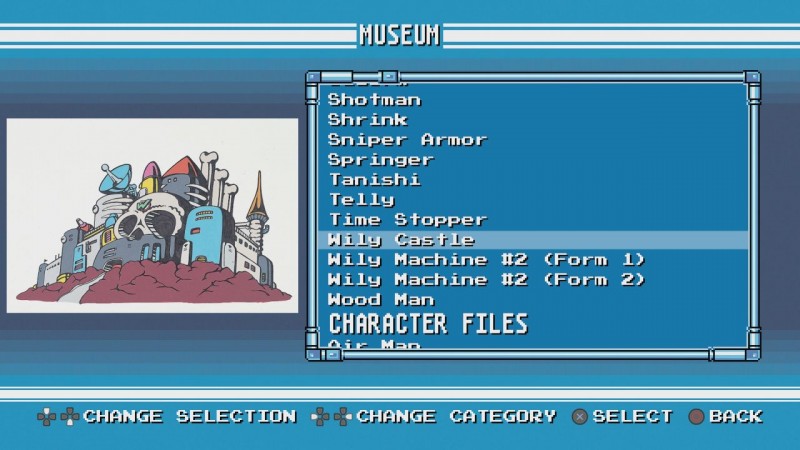 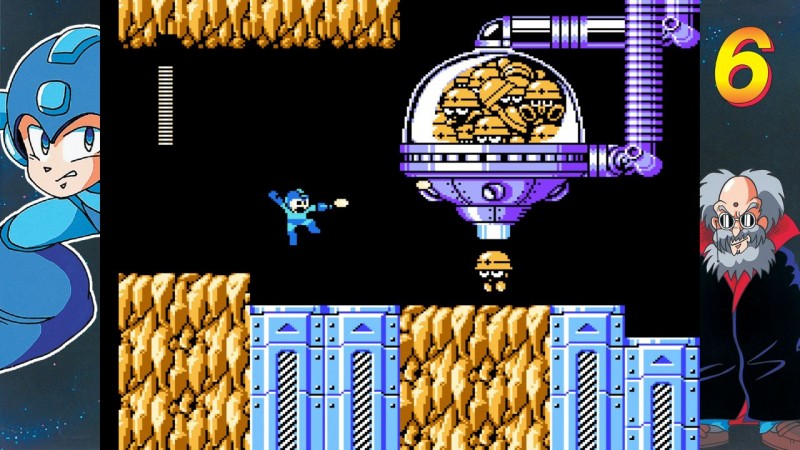 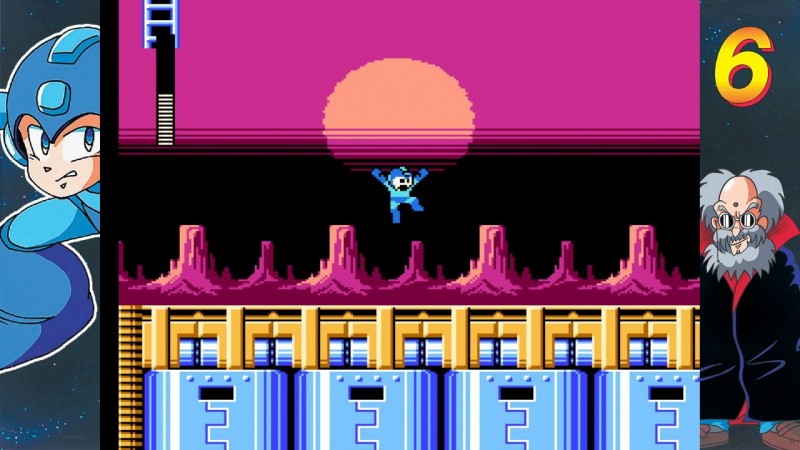 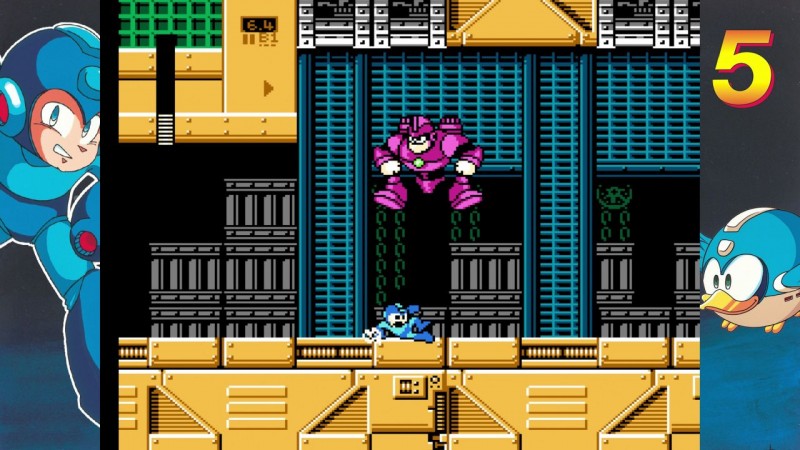 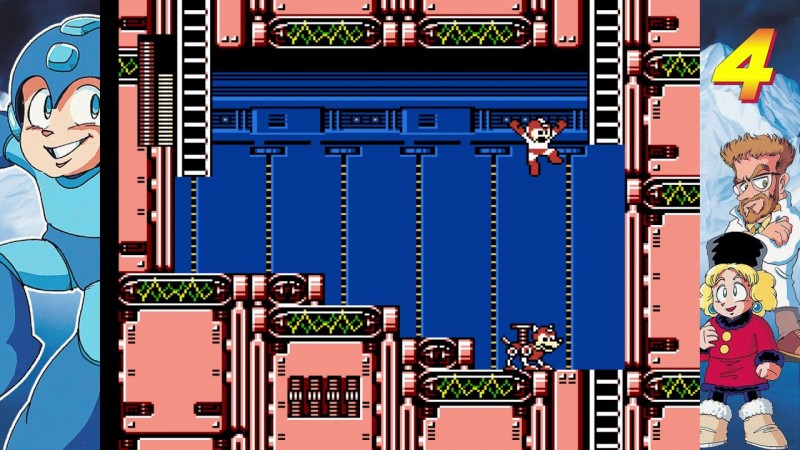