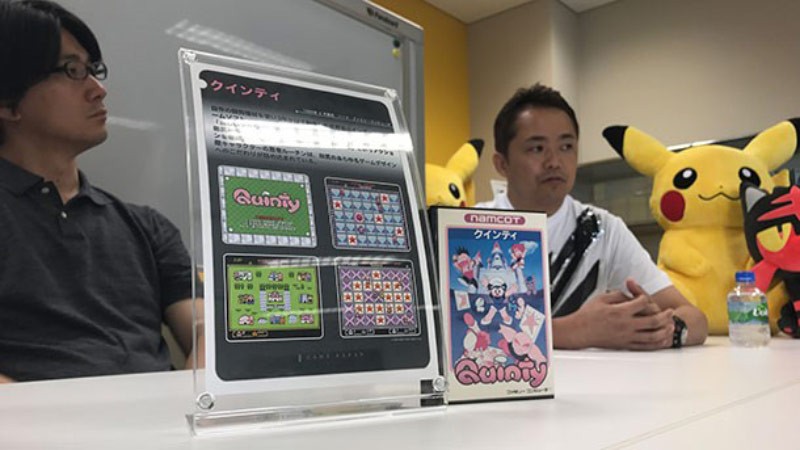 We recently had the opportunity to visit the offices of Game Freak, the creators of Pokémon, to discuss the series, its impact, and its future. The studio is more than Pokémon, however, and we talked to them about its beginnings and its games that don’t explore the world of Pocket Monsters.

Game Freak began as a magazine in Japan, or as Pokémon producer and composer and Game Freak co-founder Junichi Masuda refers to it, a mini comic. Satoshi Tajiri, who is credited as Pokémon’s creator, would visit arcades, talk to their owners and get tips for the games that would be included in the magazine, but making video games was always its goal. As a small group of video game fans, they didn’t think they could make an arcade game, but with the release of the Famicom (the Nintendo Entertainment System in America) Game Freak thought it might finally be able to make something. “When we first decided we wanted to make a game for the Famicom, that’s when we started development on Quinty [Mendel Palace in America], and we were really true indies at the time,” Masuda says, “We were just friends doing a hobby as we built this game.” Quinty is a puzzle game where the player flips tiles on a grid in order to avoid or dispose of enemies on a mission to save their girlfriend. The game was published by Namco in Japan. “When we first started making the game we didn’t really have any official development equipment, so we just sort of had to hack the NES and figure out how it worked so we could develop on it ourselves without the official sort of development tools,” Masuda says.

Nintendo wasn’t interested in the game because Game Freak wasn’t a formal development company at the time, so Tajiri shopped the game around. “When talking with Namco they said, ‘No, we can’t have a contract with an individual. We need you guys to incorporate.’ So we made the decision to form Game Freak the company,” Masuda says. After Quinty, Game Freak worked with Sony to create Smart Ball for Super Nintendo, a game where you play as a platforming jelly bean named Jerry. Tajiri did, however, open the door with Nintendo in those early days, even if it didn’t publish Game Freak’s first two games, which lead to Yoshi. Yoshi is a falling block puzzle game where players have to match pictures of familiar Mario enemies. “That game is when we first started working with them,” Masuda says. “We got the offer to create it, we developed it, and it was really successful, so we kind of formed that relationship and we got along really well and kept the development units. We borrowed them for about six years.” It was during this time that Tajiri and Game Freak developed a relationship with Miyamoto and the late Gunpei Yokoi, the creator of the d-pad and the Kid Icarus and Metroid franchises. After Yoshi, Game Freak released a Sega Genesis game based on a popular manga and anime, Magical Taluluto, that never made its way to America. It wasn’t Game Freak’s last non-Nintendo game as later, even after it found success with Pokémon, games like Pulseman, Tembo the Badass Elephant, and most recently Giga Wrecker, released on other consoles and platforms. “We’d have the game concept first and then we’d kind of decide which platform it would be best suited for so we released games on Sega Megadrive, Sega Genesis, and the PC Engine and platforms like that,” Masuda says.

In 1993 Game Freak released another game that never made it to America, but with two characters Americans are very familiar with. Mario and Wario is one of the few SNES games that used the mouse peripheral outside of Mario Paint, but it didn’t start out that way. “Originally the idea was to use the Super Nintendo Super Scope. I was a programmer on this game and at the time we were making it for the Super Scope and it was pretty difficult to work with,” Masuda says. “When it was first starting out you would shoot the Super Scope and launch nets to catch monsters but back then most people’s TVs were pretty small and the Super Scope? We couldn’t get it to quite determine the top and the bottom of the TV so there were a lot of situations where it just wouldn’t recognize the net getting shot out.” It was that hurdle that lead to the game using the SNES mouse. In 1996, Game Freak finally released Pokémon Red and Green in Japan – a game that studio had quietly been working on for six years. “With Pokémon, we were just kind of making it ourselves at first and we did present the game concept to Nintendo and they said, ‘Oh okay, good luck. As long as you guys have money, keep working on it’,” Masuda says. Nintendo would check in and offer advice and some suggestions, like releasing the game on multiple cartridges, an idea Masuda says was entirely Shigeru Miyamoto’s, but no contracts were written up during that development time. “Kind of the feeling at the time wasn’t that we got a deal with them and kept working on it over six years or anything like that. We were just us developing it on our own.”

Pokémon was a massive success and continues to be the developer’s driving force, but it still enjoys making games outside the franchise. “Of course, those side projects are always really important for the developer to try different things and we all like to explore new opportunities for Game Freak as a company, not being just stuck in one thing,” Masuda says, “But the reality of the games industry is with other projects, just to get people to notice you, there are so many games out there these days that we definitely feel that tough situation is the reality of the video game market.”