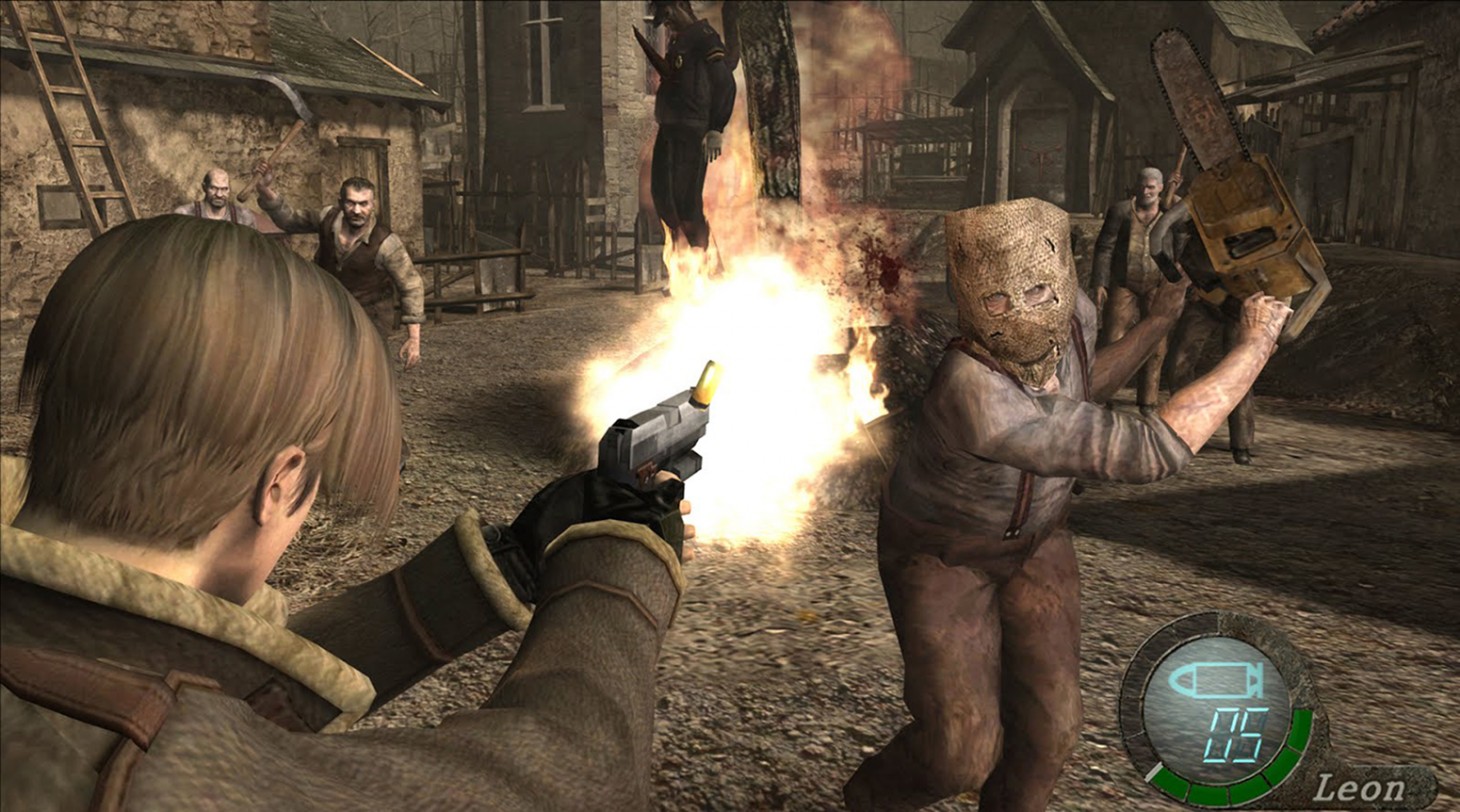 Editor's Note: Resident Evil 4 is out on the Nintendo Switch today. We're updating and republishing this piece from 2017 for the occasion.

You stumble into the village at dusk. The man who drove you here is literally burning at the center of town, tied to a stake. The villagers, something’s not right with them. Their eyes have gone weird. They wield scythes and axes, and there are dozens of them, all surging toward you. One of them even has a chainsaw. You have a pistol and house to barricade yourself in. Make each shot count.

Resident Evil 4 changed things for video games. There aren’t many games I can say that about with a straight face. Super Mario Bros. Doom. Half-Life. The Legend of Zelda. Grand Theft Auto III.

Released in January 2005, the fourth entry in the long-running horror series was a different beast than what had come before it. The original Resident Evil, influenced by the likes of Sweet Home and 3D Monster Maze, put survival horror on the map, casting players as a group of trained operatives trapped inside a mansion filled with deadly secrets. The tenets of Resident Evil would go on to become the core pillars of the survival horror genre, challenging players to carefully manage their resources, know when to evade rather than fight an unwinnable battle, and solve devious puzzles. Nearly a decade later, series creator Shinji Mikami and the rest of his team would almost kill off the very genre they had popularized by heavily revising those tenents and creating the first truly great modern third-person shooter, inspiring developers of both shooters and survival horror games to try and capture some bit of its magic for their own purposes by aping its innovations.

With Resident Evil 7 around the corner, I recently loaded up the PS4 version of Resident Evil 4 (RE4) and played it. I hadn’t touched the game since its original release and figured I’d get through the village opening sequence and then just stop playing. I played through the intro but realized as it ended, my heart pounding from the sheer terror of a close call with some jerk with a chainsaw, that I didn’t want to stop playing. I told myself I'd play just a bit longer. Three hours passed. I finally put the controller down and went to bed at 2:00 AM. The following week I spent most of my time chewing through the game, constantly finding myself surprised or intrigued by small details, and getting wrapped up in the incredible pacing. 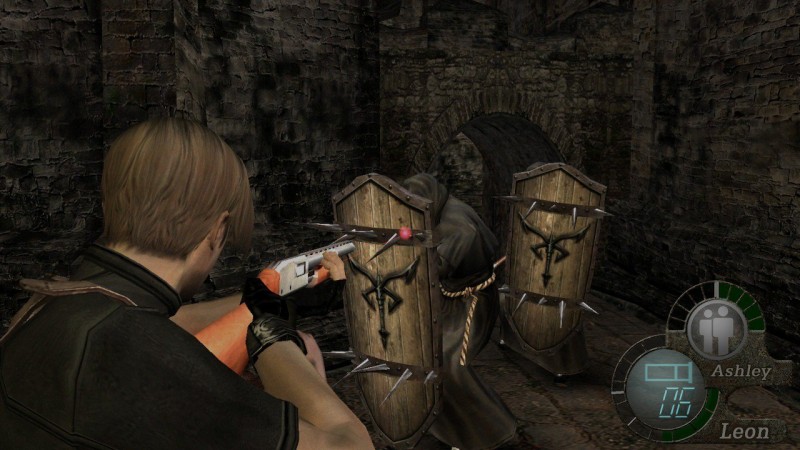 And when I say “incredible” I mean that word precisely. Your first playthrough will take you anywhere from 12-15 hours. During that time, you fight crowds of pitchfork-wielding madmen in tiny villages, you square off against a giant mutated crocodile in a lake with some harpoons, you infiltrate a castle and solve puzzles while dodging flaming bolts from cultists before moving on to a military compound to take on an entire army. RE4 understands the concept of an adventure better than the vast majority of games. This is not simply a series of moments that are strung together but are instead section after memorable section, most of them wildly different from one another in terms of environments and tone, woven together in brilliant fashion. By all accounts, it should not feel normal to play a challenging puzzle sequence followed by an intense shootout on some battlements and then a deadly game of hide and seek, but in RE4’s world it feels like the most natural order of things.

RE4 is a game of little eccentricities stacked on top of each other. It’s also, as me and my friends call it, a “video game-ass video game.” The story is simple and ludicrous, more Metal Gear Solid than anything that resembles former Resident Evil titles. You play Leon Kennedy, one of the protagonists from Resident Evil 2, as he ventures to Spain to rescue the president’s daughter from a creepy religious cult. There’s a lot of infiltration and double-crosses and a plot that’s straightforward but absolutely zany. Everything is very mechanics-focused and there’s a ton of depth to seemingly small things.

Like doors. Everything fantastic about the game's design can be seen in how it presents something as completely mundane as a door to players. As Leon approaches a door, if you tap once on the action button, he opens it slowly. Tap twice and he kicks it open, action movie style, even if you’re already in the process of gingerly opening it. You can also barricade doors with furniture to delay enemies as they try to get to you, buying you valuable time to search your surroundings for ammo or to reload. If you want to take the initiative and do a bit of a risky play, you can blast a hole in a door and then fire lead at foes through that same hole. 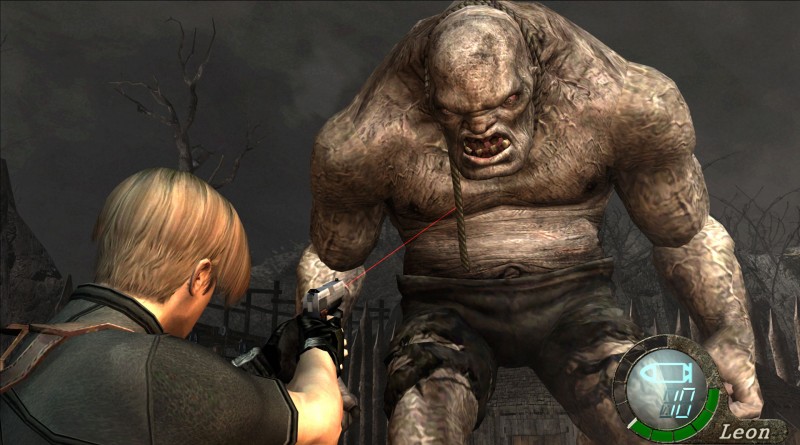 Pretty much every constant object in the game that Leon can interact with has multiple tactical options tied to them. You can climb up and down ladders, obviously, but you can also shoot enemies off of them and they take more damage from the fall (and finding ways to damage foes without wasting bullets is a blessing in the early parts of the game). You can even kick ladders while enemies clamber up them and chuckle as they fall back to the earth, screaming, being bonked in the head by one of the rungs of the ladder.

Since RE4 is a third-person shooter, the thing you find yourself doing most is shooting (and stabbing) enemies, but in that loop there’s a lot of tactical variety that isn’t even in most modern shooters. Enemies react differently to damage depending on where they’re shot. Shoot one in the leg and they’ll fall to their knees, giving you time to retreat, pull off a headshot, or a kick to the face. Shoot them in the head and they’ll stumble back, grasping their forehead. Things get even more interesting when you take enemies’ weapons into account. About a third of the way through RE4 you encounter villagers who wield torches. If you wait for them to run up to you and can time your shot just right, you can make them drop the torch on themselves, lighting them up and instantly killing them (and saving you bullets). Some enemies chuck scythes at you that you can deflect with a bullet. Shoot a baddie's dynamite as soon as it leaves his hand and it'll explode in midair, killing everything in the vicinity of the explosion.

And then, of course, there are the villagers whose heads will explode to reveal a nasty looking parasitic monster beneath, capable of taking you out in two swings of its sharp tentacles. This monster is probably one of the game’s smartest tricks because it upends our common genre expectation that Headshots Are An Unquestionably Good Thing. Where most other shooters reward you with a gruesome red geyser for putting a bullet in a bad guy’s dome, RE4 makes that occasion into a tense game of risk and reward. Headshots typically kill enemies quickly, saving you ammo, but also cause parasite-carrying villagers to evolve into that next, deadlier form. Few things have given me more anxiety in a game than watching a headless villager stumble toward me, arms outstretched, with me pointing a pistol with low ammo at its chest, wondering if it’s about to turn. Those moments where the villager’s body collapses to the ground without transforming into a monster are potent relief. 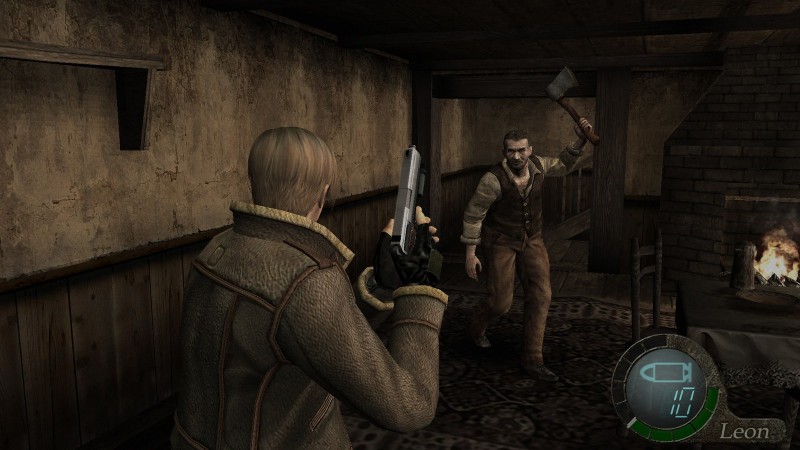 There’s such care and consideration in the flexibility the mechanics offer the player when they square off against enemies that it’s clear why Resident Evil 4 plays better than any third-person shooter from the past decade: it feels crafted, not assembled. Every action open to you feels like a a tactical choice. Even the smaller touches are bits of wonder, like the detailed reload animations or the way Leon’s bangs shift with his movement or even how his arms visibly shake while aiming weapons at enemies.

Perhaps what’s most interesting to me about Resident Evil 4 is how it stands dead center between tactical video game realism and the arcadey nonsense inherent in most video games of the '90s and early aughts. The whole game is a fine balancing act that on one hand has you trying to rescue the president’s daughter from a cheesy villain capable of mutating into a giant monster, but on the other also forces you to think about using the world around you to engage waves of enemies in a semi-realistic way. You’re not running around shooting monsters Arnold Scwarznegger-style, but often instead standing still, feet firmly planted in the ground, often trying to line up shots while also considering the tactical options all around you. How can you use that door or ladder in combination with the enemy’s limited, cattle-like intelligence to survive? To say every encounter in RE4 is about gunning down enemies is to do the game an injustice; these are open-ended puzzles disguised as combat encounters.

Resident Evil 5 and 6 didn’t understand this. They’re not bad games by any means but they have also not aged well and, despite RE4 serving as a major influence on the original Gears of War, mostly end up feeling like competent imitations of Epic’s shooter than a satisfying continuation of revolutionary ideas that RE4 introduced. As we get closer to Resident Evil 7’s release, I’m curious to see how 7’s ostensibly radical departures from recent entries in the series—shifting from third-person to first-person and pulling back from action to focus on recreating the intense survival horror experience defined by the first two games—will serve it.

I'm not convinced that Capcom's risk-taking is enough to reach the lofty heights of RE4 once more but that expectation is probably unfair. We are, after all, talking about a game that innovated two genres with one fell swoop and continues to play just as well as it did 12 years ago. Still, I'm hoping Resident Evil chooses to embrace innovation at the risk of irking the player in order to stand apart from anything out there right now, just as Resident Evil 4 did all those years ago. And even if Resident Evil's best days are behind it, it's hard to be frustrated when a series' best entry is a title that played such an essential role in shaping the landscape of video games as we know it.

Be sure to check out our Super Replay of Resident Evil 4 here.