How Ladykiller In A Bind Bravely Tackles Sex And Intimacy The portrayal of sex in video games has had a tumultuous history, often leaning more towards low-brow titillating content or acting as a reward that isn’t always realistic. Christine Love’s newest visual novel, Ladykiller in a Bind, isn’t always realistic either, as it seems like every character you speak to is constantly flirting with you or pushing your buttons. At its core, LKIAB is a sex romp, featuring titillation and eroticism, but it pushes the envelope in terms of depicting sexual content maturely and uniquely, never shying away from its brazen themes. It also covers crucial subjects, such as the role and importance of consent. Playing as a lesbian who is posing as her twin brother on a school trip cruise, you find yourself part of a strange competition of social manipulation, where outwitting and outsmarting your classmates earns you more votes, and closer to a $5 million prize.

Javy Gwaltney and I both played through the game and came away with our own impressions. Read below to find out what we thought.

Elise: So, to start off, what were your impressions of Ladykiller in a Bind, Javy? What did you think it did well, and what do you think it could have done better?

So to have a game that fixates on sex (and in such a non-heteronormative way) is refreshing even if Ladykiller’s plot is occasionally frustrating or the game goes on for too long and the writing is...kind of not great from time to time. Still, I think Ladykiller is important in the same way that Tropic of Cancer or Anais Nin’s diaries are: It’s not merely a matter of pushing boundaries, but also of presenting these sorts of taboo topics with humanity and, in spite of the game’s flaws, I think Ladykiller does a good job of presenting a certain side of people in a slightly exaggerated but still truthful way: people want to have sex and there’s a lot of complicated comedy and tragedy wrapped up in that simple statement.

How about you Elise? Where do you think Ladykiller In A Bind fits into gaming’s representation of sexuality?

Elise: When it comes to both romance and sex, it seems like video games are still trying to figure out how to not just depict it, but also how to fit it into an interactive experience realistically. Sometimes it can feel too game-y, like choosing the right gift to give a potential lover in Dragon Age: Origins or Danganronpa, or making sure you choose the correct dialogue options to ensure pursuing that character remains a possible choice later on.

What I thought LKIAB did well was that those sexual encounters weren’t sectioned off into cutscenes, and you’re never under the impression that you’re limited to saying the right thing at the right time. You’re given a fair bit of lee-way, though what you say or do still matters. Generally, pursuing someone often felt like a natural progression, which is a difficult thing to pull off.

Controlling what I said, did, or how I reacted during those sex scenes was really engaging to me. I could be more passive by letting some of those dialogue options slip by, or I could be outright flirtatious, awkward, or cold. Considering the game’s themes of BDSM, it seemed healthy and intriguing to me that even while acting more submissive, it was never portrayed as a role where you have no control or where you have no voice. The Beauty, one of the game’s characters, constantly checks up on you to make sure everything is consensual when you come across uncomfortable scenarios. In contrast, though, I felt the protagonist did this less when she was in a dominant role, sometimes pushing people beyond their comfort zones when I didn't want to.

That said, one of the things I actually really liked about LKIAB is that a lot of its characters are, uh, they’re not great people, y’know? Some of them are kind of trashy jerks, and I feel like a lot of content that dips into eroticism goes to such an extent as to present people as fantasies, with the sexual relationship being great and the object of the protagonist's affection a perfect character who can do no wrong. But everyone in LKIAB feels flawed in some way that’s really compelling to me, even if they’re all basically humorous archetypes.

How do you feel about the naming system? Did you go with options presented to you or did you create names for your characters? Elise: I was pretty fond of the ability to give the characters custom names because it gives you that much more freedom to make the game your own. I didn’t rename everyone, but I called The Maid “Wonkin’ Mistress” because it’s a weird inside joke with someone I’m seeing, where “wonkin'” is basically a cross between winking and shutting one eye completely with your mouth slightly open. Wonkin’ Mistress does that frequently and it looks super silly.

I agree that many of the characters fall into archetypes, but as the game progresses, they become much more nuanced as they open up to you. I detested The Bro originally, but as I spent more time with him, he told me about his career ambitions of becoming a lawyer, and I found out more about the unlikely friendship between him and a more prudish character. Much of the cast is flawed, but I wouldn’t say they’re downright unlikable. In fact, I think their flaws are what make them interesting to begin with.

More than anything, though, what I appreciated most was that the game didn’t shy away at all from LGBTQ relationships and sex. There are several other games and visual novels that present lesbian relationships as near perfect, innocent, or go the other extreme of seeming shoehorned in for a male audience. LKIAB is bold, real, and raw, and those moments didn’t feel contrived. As a lesbian myself, it’s something I would like to see more of in video games because it’s rewarding to be able to assume a role I’m completely comfortable with and excited about, especially in role-playing games or ones that are meant to envision one fantasy or another.

What did you think of the social manipulation aspect? Did you try and gain as many votes as you could to win The Game, or were you more concerned with just getting to know the characters?

Javy: Nope, nope, nope. I couldn’t give a care to be honest. I was just interested in getting to know all the characters and exploring the relationship. The Game was basically just a context for me to do that but it feels like more of a self-aware thing in that regard than just shoddy writing.

I think the best thing I can say about LKIAB is that I agree with you that it is consistently bold, especially in that it panders to everyone and not just an audience of dudes. It’s raunchy and inclusive, and honestly I hope we see more games like it in the future or at least games that take that unabashed sexuality and inclusiveness to heart when it comes to presenting characters as people with sexual identities that go beyond the rom com or tragic love affairs you might find in most triple-A games that deal with romance.

Elise: Totally. While some story beats were convoluted and fell flat, much of my experience with LKIAB was a positive one. I’d go as far as saying it is an “important” or “necessary” game – a similar view that you seemed to have about Mafia III. It’s progressive in its themes, but most of all it comes across fearless and unabashed, tackling topics that are often taboo in media. It balances a mix of cheesiness, awkwardness, humor, and realness in a very refreshing way that I embraced wholeheartedly. 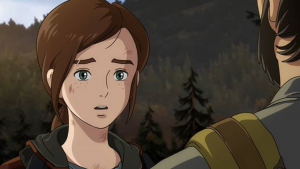 The Last of Us Part II Meets Studio Ghibli – Fanart