Don't Forget To Bring A Buddy – A Look At South Park: Fractured But Whole’s Allies Buddies are an important part of South Park: The Fractured But Whole. They are your combat party, they move the story along as you do your silent protagonist thing, and they help you explore the environment. Buddies were also an important part of The Stick of Truth, but Ubisoft San Francisco is working to expand their roles for the sequel in a number of ways. “We wanted to get more of the buddies voices and their powers in there,“ says senior producer Jason Schroeder.

The simplest way that the buddy's role is being increased is in sheer numbers. This time around, there are 12 buddies, as opposed to Stick’s six. We don’t know the full list of buddies yet, but we do know Scott Malkinson as Captain Diabetes, Kyle as The Human Kite, Stan as Toolshed, Cartman as The Coon, Craig as Super Craig, Tweak as Wonder Tweak, and Jimmy as Fast Pass will all be buddies in the game. We’ve seen other heroes in assorted cutscenes, but these are ones we know will appear in your party, help you fight and navigate the environment, and be defined as buddies.

Each buddy has a power, which you can activate in certain locations in order to find hidden items, or complete sidequests. When you come across one of these locations, as long as you have completed the requirements for adding a particular buddy to your party, they will come calling as you need them without the need to rifle through menus or try out different buddies on different interactive elements. “We’re trying to get it a little more in the natural exploration. A lot of the stuff that was the most compelling in Stick tended to be just the things you could do by yourself,” Schroeder says. In Fractured, the team wants the buddies to be more active and present throughout. The full group pictured from the Coon vs. Coon & Friends episodes of the show

Each buddy also has an ultimate attack with can be used in combat. “We always refer to our ultimates as Titanfall. Everybody’s guaranteed one. If you play well, maybe you can get two,” says director of design Paul Cross. There is a shared pool of points that charge over the course of a battle as you dish out and take damage, and when it maxes out, you can pick an ultimate to use. Schroeder describes them as something similar to limit breaks in Final Fantasy VII. You have an ultimate attacked connected to your class, but each buddy has a distinct ultimate that triggers a big cutscene mid-battle when you choose to you use it. Some buddies come with their ultimate move unlocked. Some require an additional sidequest.

The new kid – your character – has different powers and ultimates to choose from depending on your class and they all have to do with your mysterious yet powerful fart abilities.

Early in the game, Scott Malkinson as Captain Diabetes will be your buddy. Since the children have started playing a new game since Stick of Truth, you're back to square one after your brief stint as the king. As a result, Malkinson, and many of the other early-game buddies, consider you their sidekick. Captain Diabetes' backstory, according to The Coon, is that his mother farted on him while giving birth, and that’s why he has diabetes.

Captain Diabetes special power is rage, which allows him to lift heavy objects. In combat, he also uses rage as his ultimate. When you use it, Malkinson enters a world of candy, eats ravenously and goes into something like a diabetic Hulk-like shock dealing out lots of damage before giving himself an emergency insulin injection.

Kyle as The Human Kite can help you climb to high locations in the environment with something called “fart-kour”. Kyle grabs you, and you use the power of your farts to lift yourself into the air. In combat, Human Kite’s ultimate sends him into the Earth’s atmosphere to rain down a powerful collection of lasers.

Stan A.K.A. Toolshed’s power is necessary when you run into overt nozzles embedded in walls. He has a power washer which can be plugged into your character’s butt with a hose, and then you can create air pressure (with the power of your farts) to affect the environment.

The Coon’s abilities have not been finalized yet, but Ubisoft San Francisco knows how they will work thematically. The Coon always exaggerates his own abilities, inflating them far beyond what he is genuinely capable of, and you can expect that to play out in his powers and ultimate attack. “Coon is actually an unreliable narrator of his own powers. He will talk himself up to be very powerful, but you will see him trip sometimes and stuff like that,” narrative designer Jolie Menzel says. Super Craig and Wonder Tweak’s abilities are also secretive, but we know they must combine abilities for one yaoi art-infused ultimate attack.

Jimmy, now known as Fast Pass, is your fast-travel in the game’s environment, and his Ultimate attack allows him to rip a horizontal line across the battlefield as he sprints around the world in seconds.

The episodes that inspired the superheroes of The Fractured But Whole revealed that some of the kids do have genuine super-powers, like Kenny/Mysterion who cannot die. “The rest of them it’s mostly bulls---” says narrative designer Jolie Menzel. Which buddies have real powers and who doesn’t will factor into the game’s narrative, but it’s also left intentionally ambiguous to retain the kids playing nature of the kids’ game. “We want to continually dip into their imagination and let the player be in the kids’ imaginations.”

To see some of the combat and accompanying ultimate attacks in action, watch our video all about Fractured's updated combat. For more on South Park: The Fractured But Whole, click on the banner below and stay up-to-date on our constantly updating hub of exclusive content. 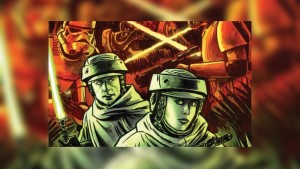