Tetris is one of the most successful video games of all time, but the story of its creation is not necessarily an uplifting one. It’s a tale wrought with peaks and valleys of legal drama, high hopes for riches, and even a murder-suicide. Created by Alexey Pajitnov, a Russian computer engineer in the 1980s during his spare time out of his love for puzzles and games, Tetris became a worldwide phenomenon. Marketed as “It’s like Siberia, only harder,” the game capitalized on the world’s curiosity of peeking behind the Iron Curtain and made entire households into gamers.

The story behind the game is currently being adapted into a comic book, appropriately named Tetris, by Philadelphia-based author Box Brown, founder of Retrofit Comics and the winner of a 2011 Ignatz Award.

“When Tetris came out for Game Boy, everybody that picked it up just started playing it constantly,” says Brown. “My Mom and Dad, and my sister, and my Grandma. Everybody in the house. And I think a lot of people have stories like that.” He explains his wife’s mom used to lock herself in the bathroom with Tetris so no one else in the family could play.

“Everybody knew it and played it and put in their 10,000 hours [with] Tetris,” Brown says. He explains he’d always heard rumors about Tetris, how certain publishers didn’t have the rights to the game so their copies were illegal. But it wasn’t until seeing a documentary about the game that he began to understand just how tumultuous its life had been. “It was crazy, the story’s insane.” Brown finally got the idea of adapting the story behind Tetris into a comic after he was approached by his editor after a conversation about the game with fellow-artist Faith Erin Hicks, who illustrated The Last Of Us comic series.

However, the story of Tetris and all the players involved was a tall order to organize. Brown, who usually focuses only on one character in his comics, such as his book Andre the Giant: Life and Legend, made a pseudo “family tree” for Tetris’ cast of characters, tying together how they were all connected through the story of the game. Unsure where to begin his own story, Brown decided take it back in time – 17,000 years.

“I wanted to go back and see where gaming comes from within the human condition and how it relates to art,” Brown says. He studied primitive man and the types of games they created and played, theorizing in his comic that gaming, a combination of humans’ sense of competition and playing, was born in the artist’s mind. He takes this idea in his book and explores its influence on later gaming, tying it into the 1889 founding of Nintendo, and ultimately how it influenced Pajitnov to make his own independent game.

“The thing that’s interesting to me about that is that, in a weird way, Alexey Pajitnov when he was making Tetris, [he was making] a pure piece of art, because it was in a part of the world [1980s Moscow] where there was no profit motive at all,” says Brown. “He never could have sold Tetris. It never crossed his mind at all when he was making it that it would [be] a product for sale. It was a pure expression of himself, you know?”

“I mean in some ways video games are like the only way that a lot of humans connect to art,” Brown continues. “It’s like the most popular art form that there is.” Brown believes that more formal artists, such as painters or musicians, would “beg” for the kinds of engagement video games get because of their interactivity. But a lot of people saw Tetris as the exact thing Pajitnov did not: a product. Long, drawn-out legal proceedings surrounded the game as companies including Nintendo, Atari, and Mirrorsoft fought over the publishing rights of Tetris on both consoles and handhelds. Presenting these in his book required a lot of research, as Brown read books detailing the case such as David Scheff’s 1993 novel, Game Over: How Nintendo Conquered The World, as well as researching the actual documents of the case.

Pouring through books, documents, and documentaries, Brown tried to tie together as many different perspectives as possible, making main characters out of several of the employees fighting for the sides of their respective companies. “At the same time, [I] have to kind of internalize this whole story and then spit it back out using my own perspective,” says Brown. “I think of the work not as the ultimate encyclopedia [of] Tetris. It’s more my take on this story and how it played out and how I feel it affected culture and society.”

Tetris lacks a lot of character conversation, instead Brown lays out the story’s bullet points in a stylized fashion. “[There were] just so many ins and outs, I thought that spelling those things out simply was important. But it’s fun to kind of add character to the characters, kind of using just visual things,” Brown says, citing Chris Ware’s art style as inspiration. “Because in some ways you’re just kind of organizing information, and being able to spill it out in a visual way that keeps it interesting was totally helpful in this book.” Note: Errors in the family tree are fixed in the book.

There are a lot of players in the story of Tetris, with more being burned by their pursuit of its riches than those who walked away with said riches and even one person tragically killing himself and his family due to financial pressures. “That’s the thing that people see when they hear about Tetris, or the person that created Tetris, they think of all the money that they’re making,” says Brown. “And you see what the pursuit of that can lead to and it really, at times, can even lead to your death. And I think that if the book ended in 1995, it would have just been a total tragedy completely. 100-percent tragedy.”

You can read all about the details on Tetris’ players and their peaks and valleys in Tetris, releasing on October 11 through First Second Books. Check out a eight page preview of the book below. For more information on Brown and his comics, visit his website or keep up with him on Twitter. 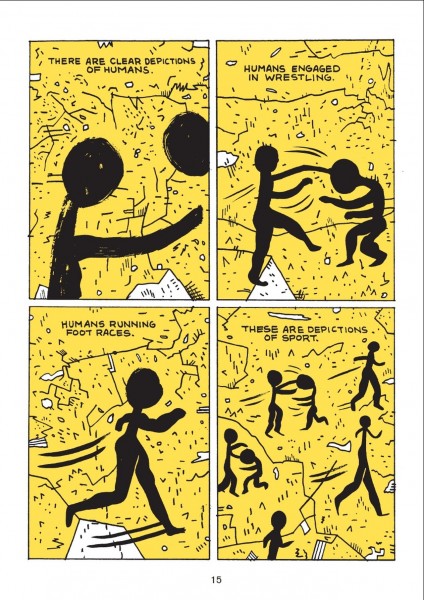 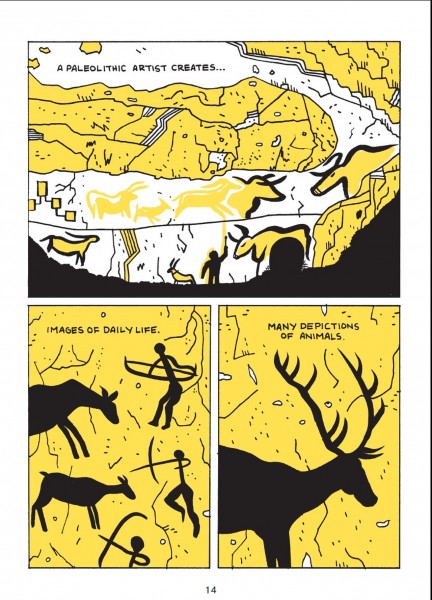 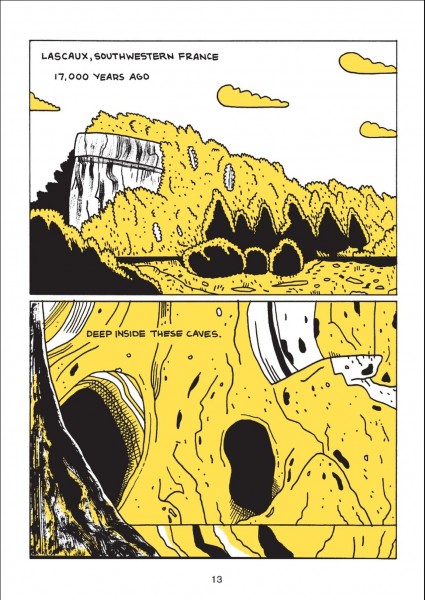 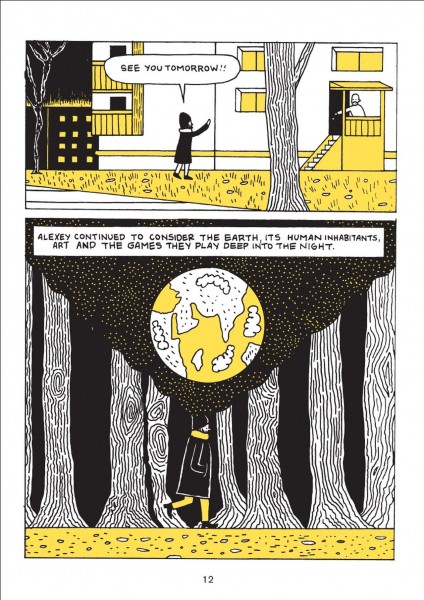 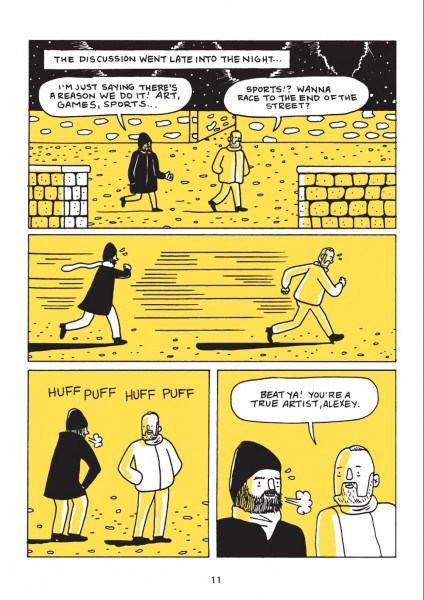 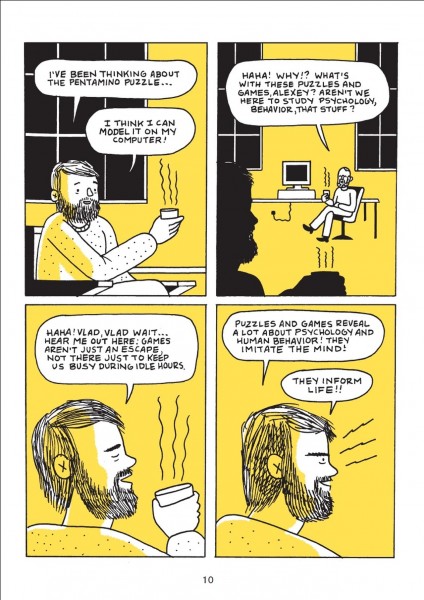 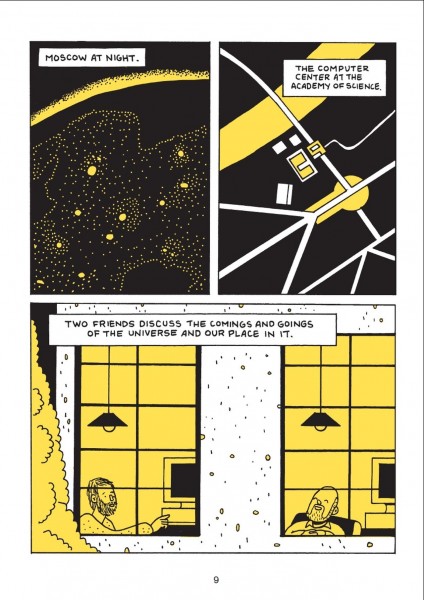 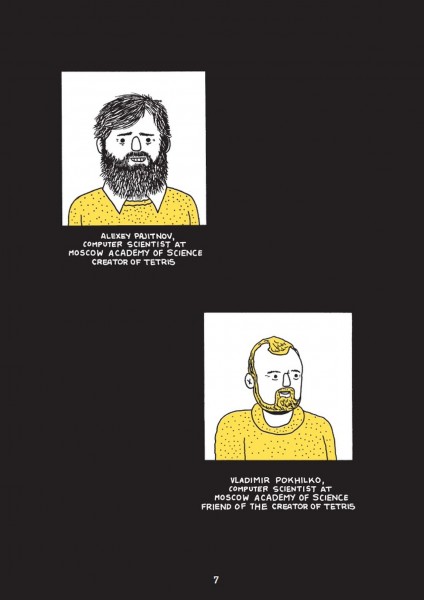