Hearts of Stone, the first expansion for The Witcher 3: Wild Hunt, is launching on October 13 for $10. The expansion is a self-contained story in which Geralt accepts a monster contract and gets more than he bargained for. It has no ties to the main plot of The Witcher 3, but the combat is geared towards experienced players.

I recently played through the entire storyline of the new expansion, taking on various new side quests and testing out some of the different choices. The expansion should keep you busy for around 10 hours, and is a great reason to jump back into the world. Here's where the expansion shines and where it stumbles.

Note: The entries below have some basic details, but I won't spoil any story revelations or fun character moments.

Works: The Chilling Narrative
We've seen some messed-up things happen in the Witcher universe. Hearts of Stone takes some cues from the Bloody Baron quest line, giving you an array of multi-faceted characters. The narrative centers on two characters: Olgierd von Everec and Gaunter O'Dimm (the man who guided you toward Yennefer's whereabouts in the beginning of The Witcher 3). Olgierd and Gaunter are caught up in a pact that Geralt must help them complete. Both characters are cruel, and enjoy toying with others and causing pain. They made my skin crawl, but they're also interesting. Gaunter O'Dimm remains enigmatic and constantly keeps you guessing about his next move. Olgierd von Everec has an intriguing story surrounding how he got involved with Gaunter O'Dimm, allowing you to see both characters differently as the journey goes on. As Geralt, you must make your own decisions about these characters; as always, CD Projekt RED doesn't provide a "right" path or way to feel about them. For those who enjoy the writing of The Witcher, this expansion delivers; the story is well done and the character development is top-notch. It's a tale I won't soon forget.

Doesn't: The Runewright
For this expansion, CD Projekt RED added a new way to customize your weapons and make them more powerful with Runewords and Glyphwords, which add extra benefits to weapons such as faster vitality and stamina regeneration. These can also be used to give Geralt powerful perks like deflecting arrows or auto-casting quen (protective shield) at the start of battle. To engage in this, you take on a side quest to help the Runewright. However, to unlock his greatest powers you need to invest a lot of money - thousands. The only gear that can be enchanted and receive the Runewright's labor are those that possess three enhancement slots. Thankfully, you can pay to add slots onto any weapon you find - another money sink. To get the best of this, you must devote time and money to it, and it's not really justified for this expansion. Hopefully, when CD Projekt RED releases the next expansion, it makes the Runewright more worth your while and less of a time and money sink. I lost interest in it pretty quickly.

Works: Tense Boss Battles
Hearts of Stone has some challenging fights, since it treats you like an experienced player - even at easier difficulties. I enjoyed having battles that required me to take advantage of my signs and watch for enemy weaknesses and patterns. In my opinion, the boss battles are more memorable than those featured in The Witcher 3's main story. As I discussed in my preview of the expansion, a fight with a giant toad forces you to pull out all stops (using yrden and igni at just the right moments) while dodging vicious attacks. Another fight had me up against a foe that launched deadly tornadoes, and one fun boss battle had a caretaker from beyond the grave that could swing his giant scythe and launch miniature ghouls while he restored his health. Every boss felt fun and unique, and I enjoyed using my wits to take down each one.

Doesn't: The Shani Romance
Let me preface this by saying I adore Shani. She's great, especially in this expansion, but her romance arc feels rushed. The Witcher 3: The Wild Hunt did a great job with the romances and making you feel more connected to each woman, but Shani's romance isn't memorable. Not all love stories are grand, but this one feels like a letdown. She's a cool character and I liked learning more about her, but I wish she was just a good friend and not a romance option, because her romantic arc doesn't have enough time to develop.

Works: Choice And Consequence
One of my favorite parts of The Witcher series is how small dialogue decisions can change the way scenes play out. Hearts of Stone carries on that tradition in interesting ways. Depending on your choices, you can avoid fights, fight different people, and keep characters alive. Exploring the different threads lends some replayability. I also like how the consequences of your dialogue choices aren't immediately obvious. Sometimes Geralt needs to be abrasive, other times he's better not ruffling any feathers. As in The Witcher 3, CD Projekt continues to do a great job at not providing any "right" or "safe" choice.

Doesn't: The Anti-Climatic Finale
Hearts of Stone tells an interesting tale and has a good build up to its final moments, thanks to great character revelations and tense sequences. However, the final showdown isn't exciting. You spend all this time finding out just how twisted certain characters are, but the final sequence where Geralt has a chance to make it right doesn't hold the same excitement. I don't expect happy endings in The Witcher, but this one felt a bit rushed for how much emphasis Hearts of Stone puts on the story. Maybe it's that you don't really get a final, big battle to overcome (At least, my choices didn't present anything of that sort). Instead, it's more of a confrontation and race against the clock.

Final Thoughts
If you're a fan of The Witcher, especially its dark universe, then Hearts of Stone is worth your time. You're constantly choosing between two evils, and that's part of the appeal. However, it also has some lighthearted moments, like when Geralt attends a wedding as Shani's date, which serves as a nice break from the more tragic moments. If you don't play the expansion, you aren't missing out on any big revelations - unless you've been dying to know more about Gaunter O'Dimm or hear a beloved character get a passing mention. I didn't love the side quests, which felt more bland and uninteresting, compared to many in The Witcher 3: Wild Hunt. The best part about playing the expansion is just revisiting The Witcher 3, getting back in that vicious world and trying to make the best of bad situations. 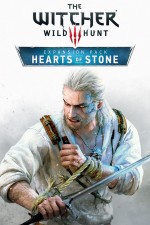