Developer 343 Industries iterates on multiplayer maps for thousands of man-hours before it lands on a design that feels endlessly repayable. This means that even the slightest details of a map are scrutinized under a magnifying glass. In order to get a better understanding of Fathom’s ins-and-outs we asked multiplayer designer Quinn DelHoyo to give us a detailed tour of this new arena map.

Narrative Background: UNSC Fathom is a research base buried deep below an ocean world called Beta Gabriel. During the Covenant War, a team of Spartan-IIs were tasked with infiltrating a Sangheili carrier and retrieving the plans for a new Sangheili weapon rumored to be so powerful that it would render the Covenant’s glassing cannons obsolete. The details of the mission were classified, but we know that it was not successful, and both the Sangheili carrier and the Spartan’s own vessel sank into the oceans of Beta Gabriel. The Fathom research station was built in an effort to mine the Covenant ship for any surviving details about this super weapon, and the ship’s remains can be seen through Fathom’s various portholes. Two different space whales can be see swimming around outside the base. The team refers to one as Timmy the Whale, which was named after creative lead Tim Longo. “We did some theming of the location," DelHoyo  says. "The coloration is more blue on one side and red on the other. We do that kind of heavy-handed on our arena maps, so we can get that sporty, team feel – almost like a homage to old Quake games. That’s why we call our multiplayer mode arena. It’s not some marketing term, it’s because multiplayer shooters of old were arena shooters, and that’s what we're trying to get back to.” Developer 343 Industries strives for balancing to make sure that each side of the map feels balanced. In addition to the colors, each side is labeled with giant letters to help teams communicate with each other. “We took the starting load out seriously,” DelHoyo says. “We didn’t want people to start out with something lame so they couldn’t defend themselves, but we didn’t want them to be super powerful either. The assault rifle and magnum have been especially scrutinized. Our magnum has received a buff since the beta. The rate of fire has gone down, but the damage has gone up. If you miss a shot, you’re penalized a little bit, so we’re hoping that it will appeal to the skilled crowd. Meanwhile, the assault rifle has been given four extra rounds to each magazine, and those four bullets make a big difference in getting kills. So those two weapons have been super-tuned, and we feel like we have a load out that will be used by both the pro scene and the casual player.” The Halo arsenal has been broken into three tiers. Common weapons like the magnum, assault rifle, and the battle rifle spawn in fairly specific spots across the map, and a fresh weapon will respawn only 20 seconds after a player picks one up. “We didn’t like old classic Halo, where you would spawn with an SMG – and the old SMG wasn’t very good – so you’d have to go on a scavenger hunt for maybe 30 seconds to find another weapon before you could fight anyone,” DelHoyo says. Guardians' new weapon-spawning system seems to help mitigate some of these classic problems.

Next up: A deeper look at heavy weapons and how players will be able to manipulate Halo 5's environments. Tier-two weapons – like the shotgun – are more powerful, so 343 Industries wants to control how many of them are on the battlefield at any given moment. This means that as soon as someone picks up one of these tier-two weapons, another one won’t spawn until that weapon is out of ammo and the player holding it swaps it out for something else. However, as soon as that gun has been ditched, another tier-two weapon appears on the map a second later. Tier-three weapons are essentially power weapons. They hover over special plates and respawn at set periods of time. Several seconds before the weapon respawns, a holographic display of the gun will appear over the pad and an announcer alerts players to the respawn 10 seconds before it drops. This helps escalate the battle at these choke points whenever a power weapon drops, giving each team an equal opportunity to gain the upper hand. “Rocket launchers are highly fought over,” DelHoyo says. “Sniper rifles are very powerful, but they’re skill weapons, so not as many people go after them. Anyone can point a rocket at anything and take people out. We also have weapons that we haven’t revealed yet that people will really want.” High-powered weapons such as the sniper rifle are placed in the middle of the map. For example, on Fathom the sniper rifle is placed on the top of this catwalk, which is equal distance from each team’s spawning area. Certain portions of the map have long sight lines, but a map is more interesting if these sight lines are broken up or constantly changing. The glowing buttons on the back of these ramps can be shot, causing the ramp to descend. This opens up this back lane, giving players with long-range weapons an advantage. However, these ramps only remain down for a few seconds before popping back up and offering cover again. “We want to refrain from random element and focus more on player controlled elements,” DelHoyo says. “If players die, we want it to be because another player outsmarted them, not because the map screwed them over.” Small holes, like the one seen on the right wall, are designed to allow players to slide through, offering quick escape during a firefight or allowing predatory players to surprise their opponents. The maps are a bit like jungle gyms, and players who take a lot of time to learn each map’s ins-and-outs will discover all kinds of neat tricks for getting the drop on their foes.

That ends our look at Halo 5: Guardians' new multiplayer map, Fathom. For more information on 343 Industries' next entry in the Halo series, check out our Halo 5: Guardians hub revealing all manner of video interviews, written features, and an upcoming special-edition podcast. 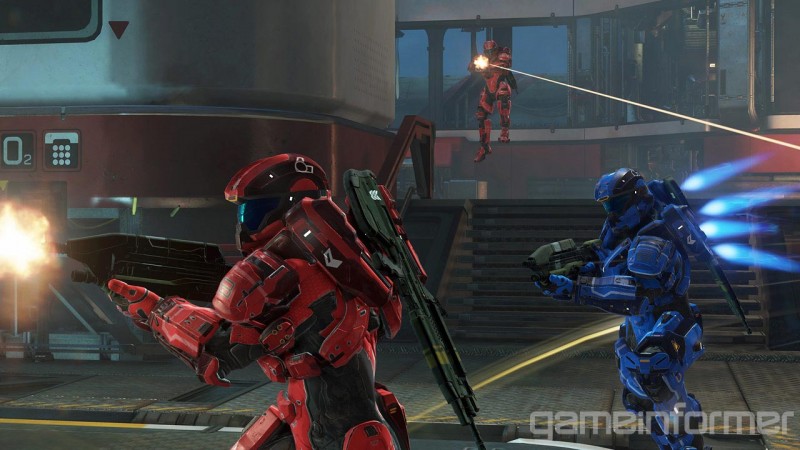 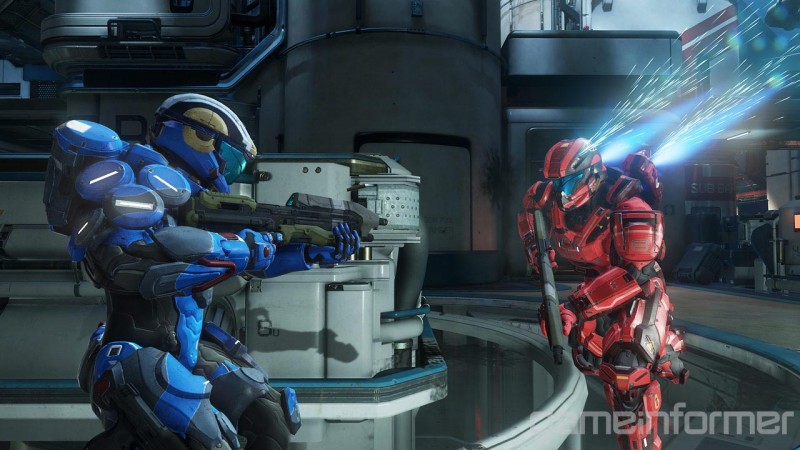 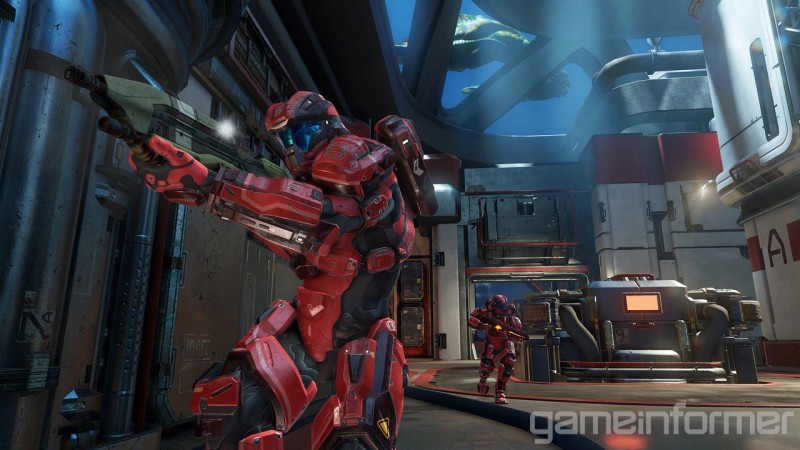 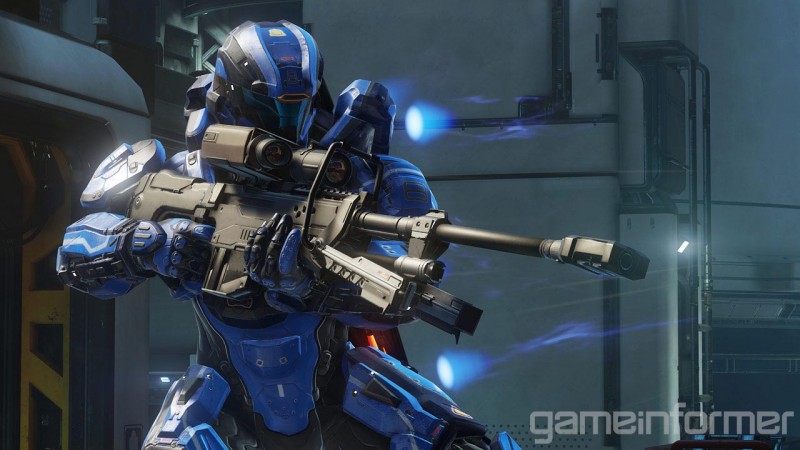 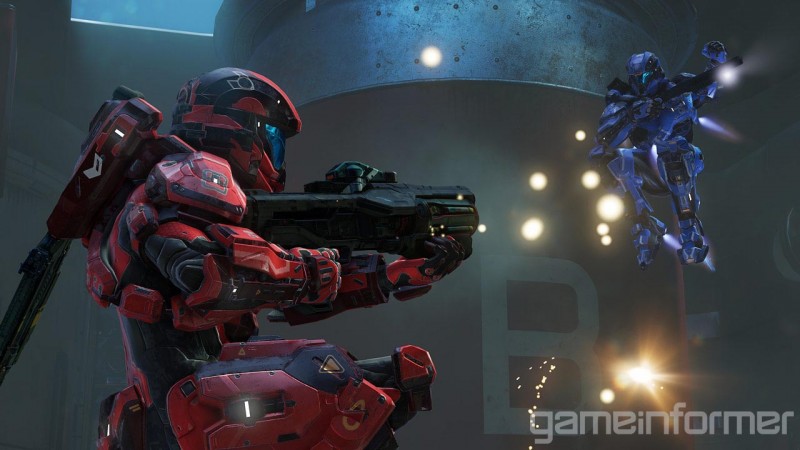 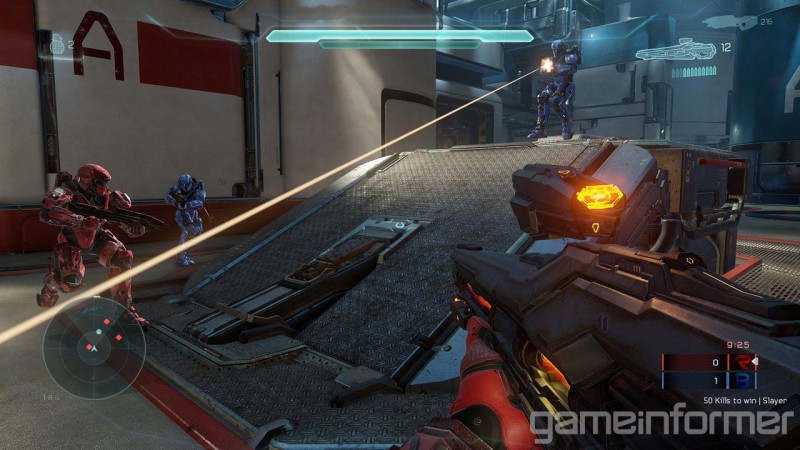