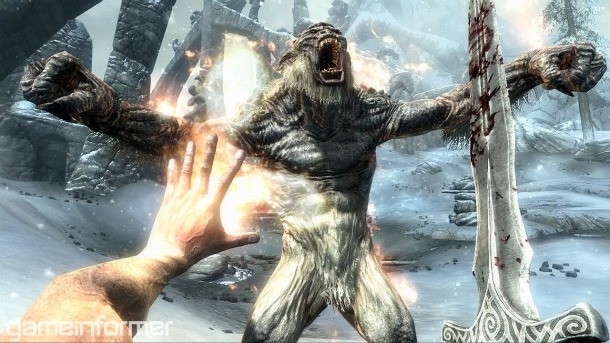 In game development, the visual improvements, non-player character AI tweaks, and new storytelling philosophies are all for naught if the base activity the player performs the most frequently is uninteresting or unrefined. In the case of an action role-playing game like The Elder Scrolls V: Skyrim, those activities are swinging swords, shooting arrows, or casting spells at the myriad bloodthirsty enemies rushing toward you in foreboding dungeons of Tamriel. Aware of the combat shortcomings and exploits players used in Oblivion, the developers at Bethesda Studios went back to the drawing board to forge a new direction for Skyrim.

“We wanted to make it more tactile in your hands,” game director Todd Howard says. “I think if you look at our previous stuff I sometimes equate it to fighting with chopsticks – you sit there and swing them in front of yourself.”

Bethesda’s solution is a new two-handed combat system that allows players to equip any weapon or spell to either one of their character’s free hands. This flexible platform opens up countless play styles – dual wielding, two-handed weapons, the classic sword and shield combo, ranged weapons, or even equipping two different spells. Switching between loadouts on the fly is made easier thanks to a new quick-select menu that allows you to “bookmark” all of your favorite spells, shouts, and weapons for easy access.

Taking Up The Blade

Repetition can be a game developer's worst enemy. As players move through the world slashing at enemies thousands of times, the gravity of the action dissipates to the point where it becomes as thoughtless an exercise as flipping a light switch. With Skyrim's combat system, Bethesda wants to restore the visceral nature of hand-to-hand combat. The first step? Changing the pace of the close quarters battles.

In the early stages of development, Bethesda watched fighting videos to study how people react during melee battles. The team found that most encounters featured more jostling and staggering than was present in past Elder Scrolls titles. Using the Havok Behavior animation system, the team is more accurately mimicking the imbalance prevalent in melee combat by adding staggering affects and camera shake. Don't expect button-mashing marathons where the attacker with a bigger life pool wins the war of attrition. If you're not careful on defense you may get knocked around, losing your balance and leaving yourself exposed for a damaging blow that can turn the tide of the battle. Knowing when to block, when to strike, and when to stand your ground is key to prevailing in combat.

“There's a brutality to [the combat] both in the flavor of the world, and one of you is going to die,” Howard explains. “I think you get very used the idea that enemies are all there for you to mow through, but it doesn't seem like someone's life is going to end. We're trying to get that across.”

Nothing drives this brutality home more than the introduction of special kill animations. Depending on your weapon, the enemy, and the fight conditions, your hero may execute a devastating finishing move that extinguishes enemies with a stylistic flourish. “You end up doing it a lot in the game, and there has to be an energy and a joy to it,” Howard says.

As with Oblivion, players have several options for melee combat. Your warrior can equip swords, shields, maces, axes, or two-handed weapons. Specializing in a particular weapon is the best way to go, as it gives you the opportunity to improve your attacking skills with special perks. For instance, the sword perk increases your chances of landing a critical strike, the axe perk punishes enemies with residual bleeding damage after each blow, and the mace perk ignores armor on your enemies to land more powerful strikes.

A good offense must be accompanied by a good defense. To make defending a less passive activity, Bethesda has switched to a timing based blocking system that requires players to actively raise their shields to take the brunt of the attack. If you hold down the block button, your character will attempt to execute a bash move. If you catch a bandit off guard with the bash while he's attacking, it knocks him back and exposes him to a counter or power attack. Players can block and bash with two-handed weapons as well, but it isn't as effective as the shield. Warriors who prefer the sword-and-shield approach can increase their defensive capabilities with shield perks that give them elemental protection from spells.

Bethesda also smartly changed the pace at which characters backpedal, which removes the strike-and-flee tactic frequently employed in Oblivion. In Skyrim you can't bob and weave like a medieval Muhammad Ali as you could in Oblivion. Players can still dodge attacks from slower enemies like frost trolls, but don’t expect to backpedal out of harms way against charging enemies. If you want to flee, you must turn your back to the enemy and hit the sprint button, leaving you exposed to an attack as you high tail it to safety. 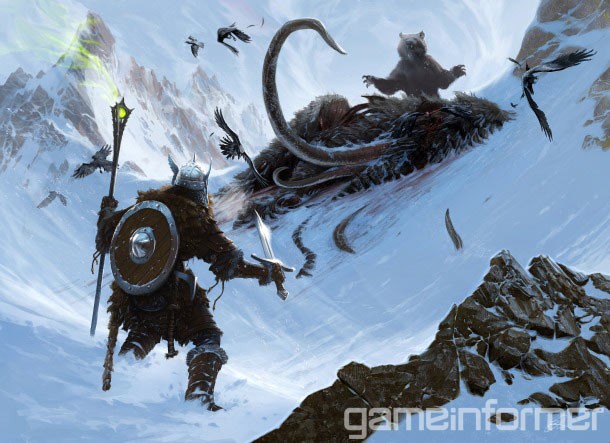 Keeping in line with the philosophy of making the combat more tactile, Bethesda took inspiration for its spell casting from an unlikely source in Irrational Games' BioShock. Fighting his way through the city of Rapture, Howard was impressed with how Ken Levine's team visualized the power of the plasmids in your hands. They're adopting a similar approach for Skyrim.

“Before when we had magic, it never felt to us like you were actually doing it,” Howard admits. “It was a separate button, it flew out of your fist, and you could have a shield in your hand or a two handed-weapon – you could do it with anything.”

In Oblivion spells were cast with a face button, which allowed you to equip traditional weapons for melee combat and deftly cast spells between swings. By forcing players to equip a spell with one of their hands, players must make more of a commitment to learning the arcane arts. The ability to equip two different spells on your left and right hand raises the question – can you combine more than one spell? “We're not talking about that,” Howard says with a smile. “We're not sure. We'd like to; it'd be awesome.”

Even if you can't combine spells, magicka students will have no shortage of options, with over 85 spells divided into five schools of magic – destruction, restoration, illusion, alteration, and conjuration. Longtime Elder Scrolls fans may notice that the school of mysticism is absent. That's an intentional move on Bethesda's part. “It always felt like the magical school of mysticism – isn't that redundant?” Howard says. The spells formerly housed under the domain of mysticism have been moved to other schools of magic.

One of the more alluring changes to the spellcasting in Skyrim is how you can employ spells in different ways. For instance, you could blast enemies with a flame ball from afar, hold the button down to wield the spell like a flame thrower, place a rune on the ground to create an environmental trap that spontaneously combusts when an enemy steps on it, or equip the spell with both hands to deliver high damage fireball attacks that drain your magicka reserves quickly. The shock and frost spells give players an equal amount of flexibility.

The Havok Behavior technology gives the spells more visual flair than we've seen in past Elder Scrolls games as well. If you cast a frost spell, you'll see the effects on the enemy's skin. If you're wielding the flame spell like a flame thrower, the environment will catch fire for a short while and burn anything that comes into contact with it.

More so than in Oblivion, Skyrim’s new magic system also gives players legitimate benefits to using one attacking spell over the other. Fire deals the highest amount of damage, lighting drains the enemy’s magicka, and frost drains stamina and slows down enemies physically. This gives players more incentive to use particular spells against specific enemies. Why shoot fireballs at a wizard when you can simultaneously drain his heath and magicka with a shock spell? “There’s a gaminess to it that we didn’t really have before,” Howard says.

If you come face to face with another wizard, you’ll want to keep an attacking spell in one hand and improve your defense by equipping a ward spell in the other. Suddenly, magic duels become much more interesting, as you must attack at the opportune time, use the ward as a shield when your opponent is casting spells your way, and manage your magicka level by consuming potions. 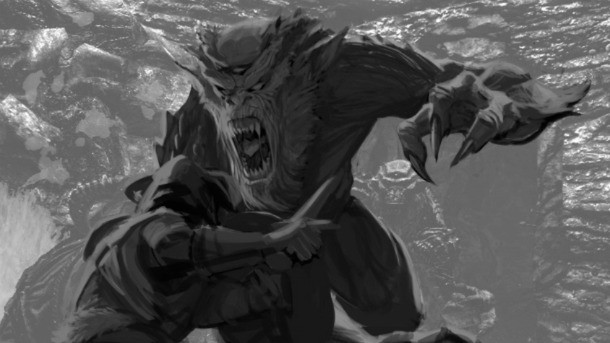 Dealing Damage From The Shadows

Magicians and warriors aren’t the only play styles enjoying the benefit of combat enhancements. If you prefer to do your killing from afar with a bow and arrow or assassinating enemies from the shadows, Bethesda has some improvements in store for you as well.

Ranged weapons could be effective in Oblivion once you improved your skill level, but you had to pierce enemies with several arrows to take them down. After playing an Oblivion mod that turned the bow and arrow into a formidable weapon capable of one-hit kills, Bethesda decided to adopt that approach. It now takes a lot longer to get off a shot, but the arrows are much more powerful than before.

As in Oblivion, you can zoom to aim, and the longer you keep the bow drawn the more powerful your shot will be. Unlike Oblivion, the arrows now violently impact enemies with a satisfying thud. To keep players from coasting through the world plucking enemies from afar, Bethesda has significantly altered the arrow economy to make them a valuable but limited option. You won't be rolling into combat stacked with 50 Daedric arrows anymore. Though you don't have much defense when using the bow and arrow, if an enemy gets too close for comfort you can still execute a bash move, which knocks your foe off balance and gives you time to create distance between you and your target.

Stealth basically works the same as it did in Oblivion, but Bethesda has slightly altered what happens once enemies detect your presence. Now when NPCs think they see or heard something, they go into an alert state. Characters with a higher sneak skill will have more time to duck back around the corner or find sanctuary in the shadows. This new system eliminates the sudden attacks that sometimes caught players off guard in Oblivion.

Once you successfully sneak up behind an unsuspecting victim, you can unleash a deadly blow with the dagger, an almost useless weapon in previous Elder Scrolls games that is receiving a major boost in Skyrim. “Now when you sneak up behind guys, the dagger does something like 10x damage,” Howard says. “I don’t know if we’re going to keep that, but you feel like you should be killing the guy if you’ve gotten that close and you have a dagger.”

Though the dagger is still considered a one-handed weapon skill, the perks for the weapon are housed under the stealth banner.

As the Dragonborn, players can wield the dangerous dragon shouts during battle as well. The shouts may have magical properties, like the ability to slow time or call a dragon to your aid, but they are different than magic in that every character can employ them regardless of their spell casting skills. If you want to learn more about this supplemental power, read our in-depth discussion here.

Binding all of these improvement together into a cohesive system, Bethesda's reinvigorated Elder Scrolls combat looks to be taking a large step forward.