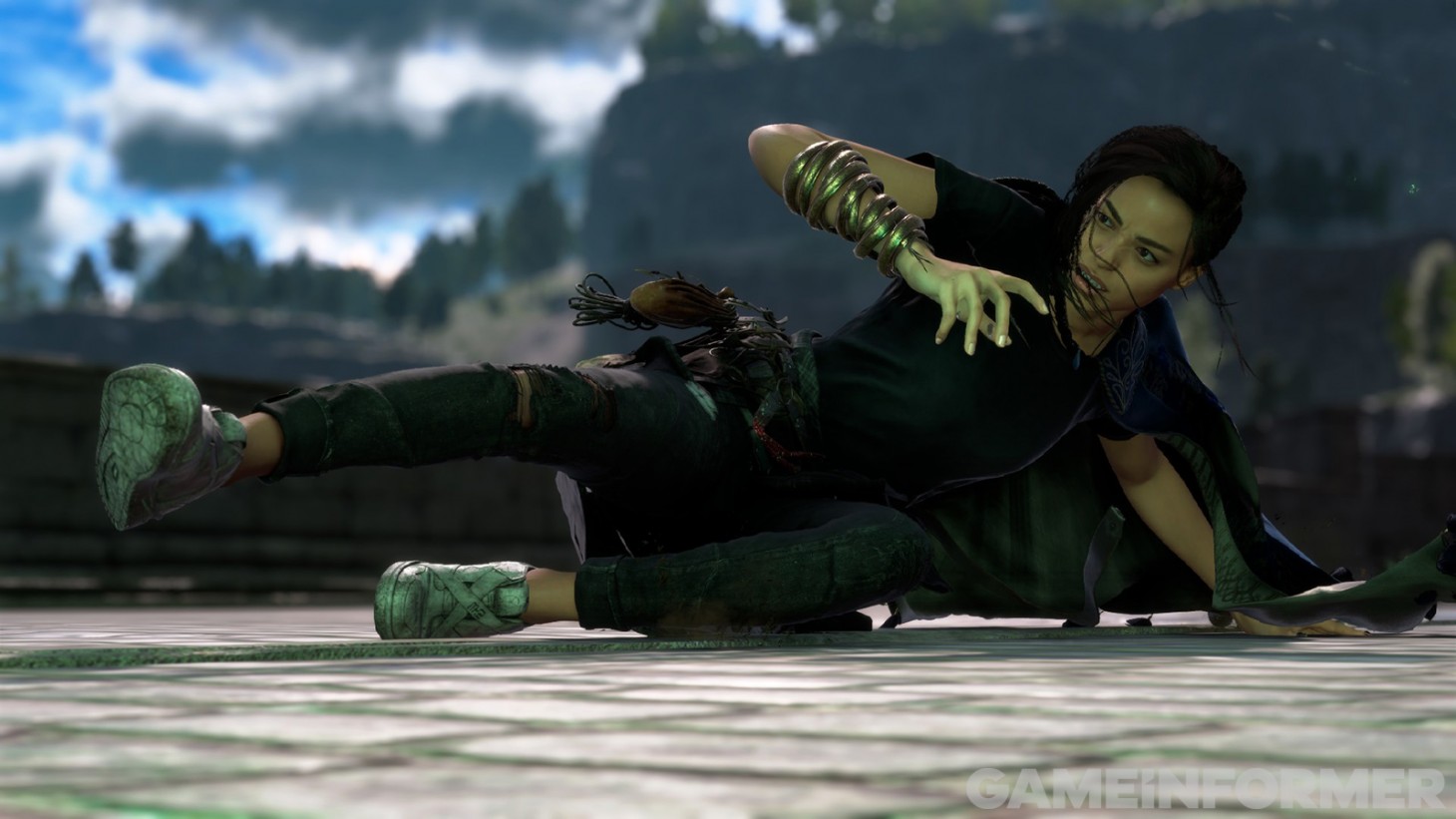 Lifting The Fog On Side Activities In Forspoken

Forspoken is a story-heavy game with the narrative mainly tying into the central quest. But Forspoken is not a linear game, and with such a vast, open world, we wondered what happens if you step off the golden path. To satisfy our curiosity, we recently sat down with developer Luminous Productions and got our first look at the game’s various side activities and optional objectives you can find around the map. Besides seeing more of the magical parkour in action and noticing the plethora of crafting materials lying around the realm, the team walked us through crafting in Refuges, enhancing stats at Monuments, finding knowledge in the Guild towers, and venturing into the Depths of Corruption. 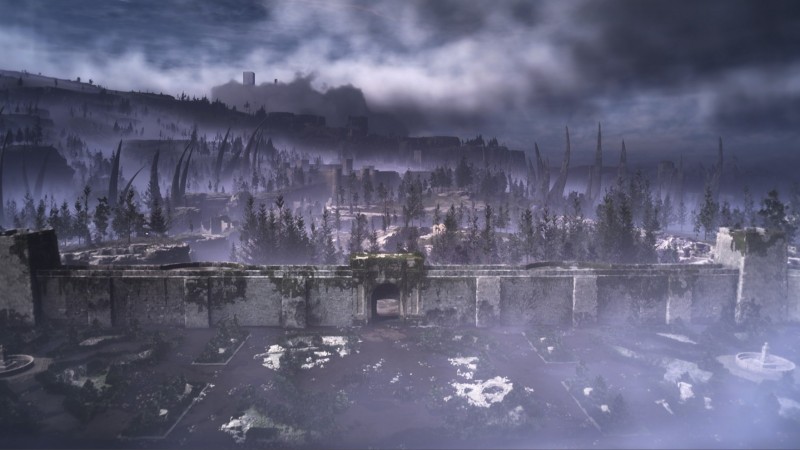 As the name suggests, Refuges scattered throughout Athia provide Frey a space away from the ever-looming fog and the hostile creatures under its influence. The retreat we saw, Water Garden: Central Refuge, reflects Athia’s current state. Its exterior is plastered with images that evoke the ecclesiastical imagery of our world’s Medieval and Renaissance periods. This suggests Athia was, at some recent point, a thriving culture with a rich artistic tradition. Now, however, those images are fading and shrouded by ominous mist. The building’s roof is missing patches, and its stone foundation is starting to crumble.

Entering the shelter, the game notifies us that the structure is now a fast-travel destination as Frey heads towards a cobwebbed corner with a workbench. Players can upgrade their gear or craft new items here. The crafting options include brewing healing potions and increasing the carrying capacity for the medicine and materials pouches. A helpful note on the table across from the workbench details the world’s lore, including information on Athia’s once-benevolent but now Break-corrupted rulers, the Tantas. The information is neatly tucked away into a menu tab that players can access later if they want. Probably the most intriguing data gleaned from the Refuge’s manuscripts are the locations of various other shelters in the nearby area, all of which are automatically populated on the player’s map so Frey can venture out to find them later. This system seems like a really good way to give players an idea of what to do out in the world without requiring them to stumble blindly through the Break. 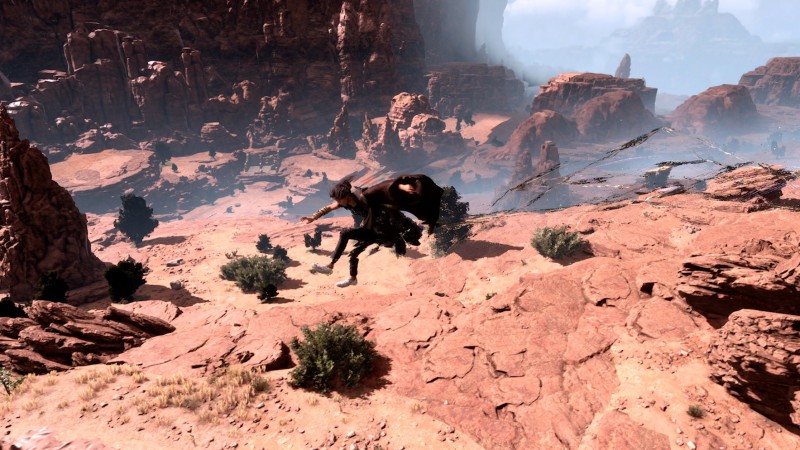 Not far from the Refuge, the map shows an unexplored structure called the Lutetia Guild. It may lie outside the critical path, but the tower-looking map marker proves too intriguing to ignore. Flagging it on the map prompts a floating icon to appear in the world, making the Guild easy to locate. The magical parkour system really shines along the way as Frey leaps up and over a handful of steep cliffs in style.

Forspoken’s traversal system truly seems like one of its biggest draws, and the open world is a perfect playground to revel in Frey’s enchanted dashing. According to the game’s co-director Takefumi Terada, the developers put a ton of effort into perfecting the fast-paced and fluid movement abilities. This work is evident as we watch Frey bound across the landscape and, in a matter of seconds, reach the façade of an imposing stone building. Larger than the Refuge, this multi-storied tower houses rows of books, scores of crafting resources, and even unexpected enemies.

A group of scholars once graced this location’s halls, and by rummaging in their abandoned research, Frey discovers clues connecting to the lore of her own quest along with more points of interest to explore. After climbing several flights of stairs to the top, we see that getting down is even more fun than the journey up. Frey launches off the stories-high roof, activating a handy, gravity-defying spell to cushion her fall before actually hitting the ground. A good thing, because the developers confirm there is fall damage in Forspoken, so be careful not to plunge over a precipice without the necessary magic! 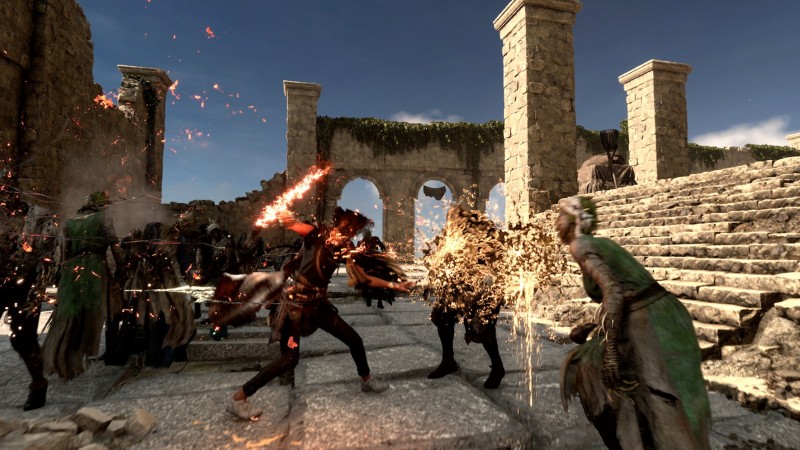 On your travels through Athia, you’ll occasionally find lofty memorials that offer Frey the chance to increase her stats, called monuments. In the preview, we checked out the Monument to Strength. Its shape recalls an Egyptian Ankh, pointing to one of the game’s real-world cultural inspirations. Raio Mitsuno, Forspoken’s creative producer, explained that the team was interested in weaving ideas from our world into Athia’s. This, according to Mitsuno, is where the developers got the idea for stat-boosting nail polish. “Much like how in Ancient Egyptian and Babylonian societies decorating and adorning one’s nails was part of the culture, it’s very much the same with Athia,” Mitsuno says. With the game’s unusually expansive female cast, this system raises a few concerns, but it’s difficult to say how the final game will execute the idea.

It’s easy to imagine that the massive monument would have made an impression when it was first erected, but its worn, cracked platform currently conveys only long-faded grandeur. The elements are chipping away at the blocks of cut stone lining the walkway, and grass is starting to spring up through the cracks. A spikey, otherworldly aura surrounds the main shrine, but Frey dispels this with a burst of her own magic, and the corrupted shell cracks and slides off.

Extending her hand out to the newly revealed monument, Frey receives an upgrade to her defense. This is a sensible boon to get from the Monument to Strength – a memorial connected to Athia’s Tanta Sila, who embodies the same trait. The other monuments you’ll find throughout the world will similarly link to the other Tantas, and they will likely boost a stat related to each ruling woman’s defining characteristic. 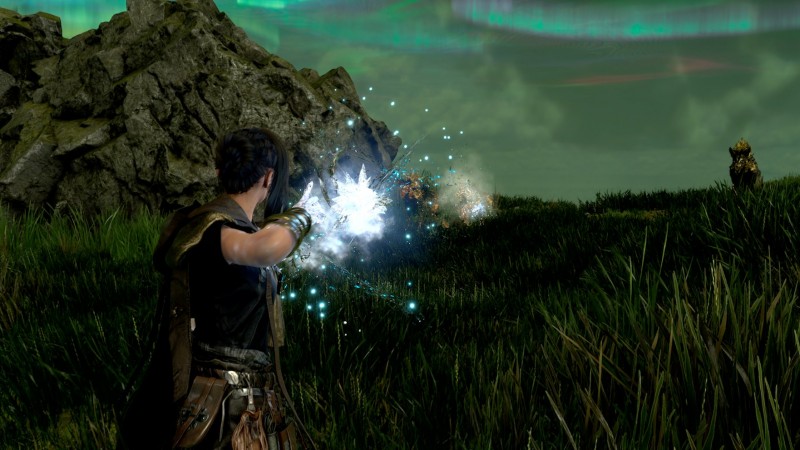 In an earlier preview event, Luminous Productions introduced players to Break Storms, a kind of influx of fog that sweeps through the land, swallowing anything in its path. If Frey gets swept into the phenomenon, she’ll face hordes of incredibly difficult enemies, but the team promises the challenge will be worth the reward. We didn’t get to see what happens at the end of a Break Storm, as Frey died during the fight. But in our recent sit-down, the developers introduced us to a different phenomenon called Depths of Corruption.

Various realms will feature a location that is heavily dominated by the corrupting fog. We saw Frey venturing into one realm’s most Break-infested area, its grassy fields quickly giving way to the mist. At the densest point, Frey stands in a landscape that looks made of fog. There is a pit at its center, and the player is prompted to jump in. Following the command, Frey appears as though she plunged into a deep body of water and at the bottom is a surreal land where enemies provide plenty of challenge.

Along with specific landmarks and dangerous Break sites, Forspoken’s open world offers abandoned villages to explore, geological features to leap over, and treasures to plunder. There are even small dungeons called Seat of Reflections to fight through – though we will dive deeper into these later this month as we continue to celebrate Forspoken as our March cover story.