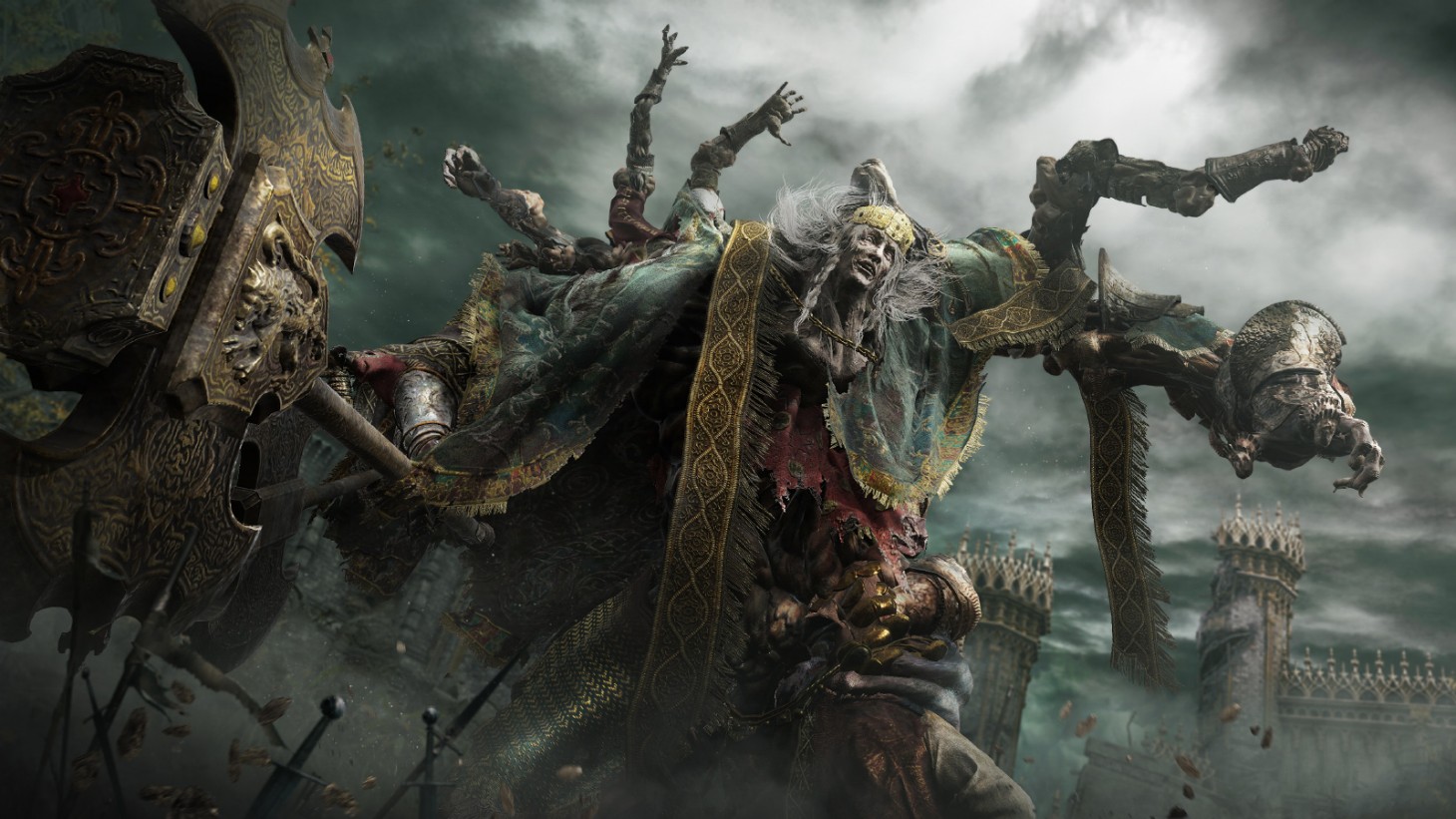 While Limgrave offers players a variety of smaller-scale dungeon and boss experiences, Stormveil Castle looms over the entire zone and features two major bosses. Many have already seen Margit the Fell Omen, who punished players in the closed network test. During my hands-on time with the game, I had the chance to face off with Godrick the Grafted himself, the current lord of Stormveil, and a serious challenge, especially for an “early game” boss. Granted, you don’t have to fight Godrick at all to get to other adjacent zones to continue exploring and powering up, so my path to the many-appendaged tyrant was brisk. I didn’t really do a whole lot of leveling up or gear optimization because the clock was ticking during my 10-hour play session, and I wanted to see and do as much as possible. It’s safe to say I was fairly underleveled compared to when From Software expects players to take on Godrick, but it’s important to reiterate that because of the open-world structure of the game, everyone’s experience is likely to be quite different. If you do wander into Godrick early on, perhaps it’s best to take a detour and check out the surrounding biomes before attempting to take him on.

Anyway, the first thing that struck me about this fight was the sheer breadth and depth of Godrick’s moveset. It’s something more akin to say, Orphan of Kos in Bloodborne, where even after plunging back into battle many times, I was still seeing new animations and abilities. Now, Godrick is definitely not as tough as Bloodborne’s pinnacle monstrosity, but he’s also fairly early in the game, and his large array of skills will likely keep players on their toes for a multitude of attempts. Now, he still has some core telegraphed abilities to look for and exploit, and like many other From Software bosses, these abilities can change or be altered as he enters “phase two,” which occurs at around 50% health or so. As many have already seen in preview footage, Godrick grafts a dragon head to one of his many arms at this stage, unlocking a new and deadly set of skills, some of which augment his already dangerous abilities.

So, here’s a question that’s been on everyone’s mind – do the spirit summons trivialize or minimize the impact of big battles like Godrick? Based on my experience with him, absolutely not. Granted, I had not yet found the ability to upgrade my spirit companions, which I assume is tied to a character named Roderika. So, mine were “tier 1 spirits”, but Godrick was able to completely obliterate most spirits I experimented with in one or two attacks. Early on, I attempted to use a spirit jellyfish summon that would splash poison on Godrick from afar, dividing his attention between us and making sure that I “pulled aggro” from him before he’d kill my little buddy. However, once he got it in his mind to crush the critter, it was over fast, so even though the poison ticking seemed useful, I tried other options. My spirit wolves and townsfolk were beyond useless, as Godrick’s repertoire has multiple and frequent area-of-effect attacks, making these packs of companions useless. Of my magic menagerie of spirits, the Skeletal Militiamen proved most useful, though honestly, they still were just really a speedbump for him. Their value? These skeletons can come back to life after they fall, so they probably bought me more time and hit windows than any other spirit summon.

That said, the spirits overall did almost nothing to dull Godrick’s edge. A vast array of extremely fast melee attacks, point-blank-cascading area-of-effect attacks, and fire attacks with the dragon head make Godrick a real issue. In phase two, I had my best luck attempting to trail Godrick when he would use a sort of sweeping flamethrower attack where he points the head at the ground and slowly moves forward. This is a great chance to get some shots in at his back, but you have to be careful all the same, as some of that fire trickles back behind him and can hit you if you get too close or err to the side.

When defeated, Godrick drops a “Remembrance of Godrick,” which I could use to gain many runes. Like a lord or Boss soul in other From games, I assume this can also be used to transform into a serious piece of armor, a weapon, or a spell. I also obtained one of the key Great Runes that I assume are tied to progressing to the game’s final canonical area or boss, similar to how the Lords of Cinder are structured in Dark Souls 3. Godrick took me quite a few attempts, and if he’s the “first” boss of the demigods to take on, that leads me to believe that others in the hierarchy are going to be quite challenging indeed.